By Jenny Whidden, Milwaukee Neighborhood News Service - Jun 19th, 2018 11:15 am
Get a daily rundown of the top stories on Urban Milwaukee 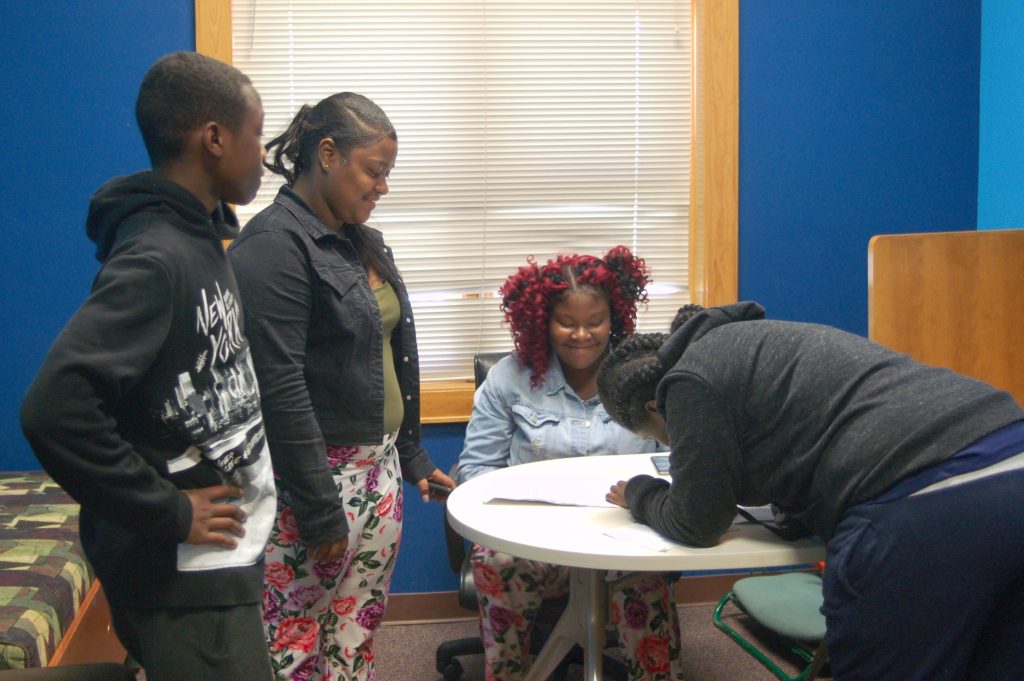 Pathways students laugh and talk as they finish up their projects on the last day of school. Photo by Jenny Whidden.

Three years ago, Julia Burns and three other parents of Milwaukee-area students shared their vision for a new kind of education — one that defied traditional ideas about learning. From that vision, the four founded Pathways High, a free public charter high school, where staff and students recently completed their first year.

Pathways, located at 336 W. Walnut St., was chartered through the University of Wisconsin-Milwaukee and  is rooted in project-based learning. Rather than taking tests and  completing homework, students fulfill academic standards through projects.

“I believe there is so much human potential that gets squandered in traditional education models,” Burns said.

Tony Shafer, the school’s English teacher and dean of students, said Pathways offers a balance between traditional and innovative teaching.

“We know how to help the kids develop projects that are meaningful to them,” Shafer said. “We also know when we need to stand up and teach in a traditional classroom.” Instruction can look different every day depending on what the kids need and that is a strength, he said. 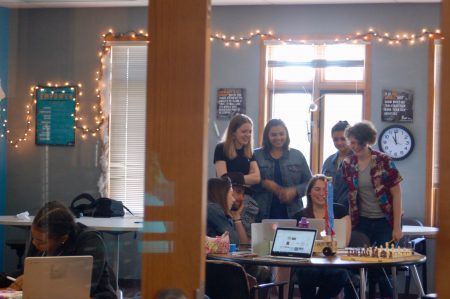 Students gather around a laptop in one of the school’s main classrooms to view a project. Photo by Jenny Whidden.

Shafer, who has 25 years of teaching experience, said he was nearly ready to leave the field before Pathways because he was frustrated with traditional education.

“Pathways is not afraid to experiment, to try new things, to gloriously fail and to pick ourselves up again and keep going,” he added.

Looking back on their first year, students and staff said there were many challenges including behavioral issues.

“There were growing pains. It was definitely a wild year because there were so many things going on — schedule changes, teacher changes,” freshman Olivia Partenfelder said.

Despite the roadblocks, she said the growth and opportunities she’s experienced at Pathways have shown her that the school is worthwhile.

Through an entrepreneurship class, Partenfelder and a few other students created MKE Socks, a company that donates a pair of socks for each pair it sells.

“I’ve always struggled with regular learning because it’s just so forced upon you and so bland,” Partenfelder said. “Here, I’ve been able to choose what I want to do and just really learn how I want to learn.”

Freshman Saida Brema said she was attracted to Pathways because of such unique programs as staying a fifth year and taking college courses.

“I want to stay for the four or five years to see where this school will go because, with how much the school has been through this year, I think next year will be really good,” Brema said.

Burns, who lives in the Wauwatosa school district, said the school had about 80 students this year. She said Pathways is diverse by design as the founders are pursuing a 50/50 ratio between suburban and urban students. In the first year, the ratio was 65 percent urban and 35 percent suburban students, according to Burns. Shafer said this diversity is a big part of the school’s success.

“Milwaukee is one of the most segregated cities in the country, and even well-intentioned kids may not get a chance to interact with kids outside of their neighborhood,” Shafer said. “Here, these kids become friends. Here, these kids become colleagues. Our culture advances what I think just about everyone hopes will happen in our city.”

Freshman Sam Heitz, who was impressed with the small school size and project-based learning, enrolled at Pathways the day he toured the school.

“I feel like the culture here is amazing. I had all white friends before I came here. Not that it has to be a racial thing, but it was for me,” Heitz said. “Now I have a very, very diverse group of friends and I really love it because it’s interesting to compare our cultures. There’s a whole chunk of the world that I was cut off from.”

Heitz said projects he worked on included building a ten-foot catapult for physics and a stand-up paddle board for geometry.

Because many of his close friends are leaving after this year, Heitz said he seriously considered transferring as well. However, he said, he is devoted to the school.

“I’m terrified because of the changes for next year, but it’s an excited terrified. I embrace change,” Heitz said.

Heitz and a couple of other students were involved in some of the new staff interviews, and he said students received Google form surveys before almost every change during the year.

“I really appreciate that the student body is given a voice in what the school’s future is,” Heitz said.

Burns said the founders are considering changes that will not be overwhelming for both students and staff. Starting a new educational culture from scratch is not as limitless as the founders first imagined, she said.

“You think about the people that you’re bringing into the school — both staff and students. They carry with them a culture and a history of what education looks like for them. So it’s still a change initiative even though we’re a brand new school,” Burns said.

Pathways is expanding its single administrative position to three. Rather than having one director, the school will now have a director, a principal and a dean of culture.

Of the new dean of culture position, Burns said success in academic standards relies on support for student experiences outside of school.

“Bringing cultures together, we want to be very intentional about how we have the students learn the skills of empathy and the means for communicating across different cultures,” Burns said.

With the first year under her belt, Burns said she feels even more optimistic moving forward.

“The thing that I am the most excited and enthusiastic about is the amazing students that we’ve had this year and that are coming back and the new students that we’re getting,” Burns said. “We’re seeing the enthusiasm in the kids. Their eyes light up when they can do work that they’re really passionate about. To me, that’s where things just take off.”

Pathways High will host an ice cream social for prospective students Monday, June 18,  between 6:00 and 7:30 p.m.