Vinehout Is Different Kind of Democrat

A policy wonk, populist and hunter, whose stance on guns annoys some party members.

By Laurel White, Wisconsin Public Radio - Jun 18th, 2018 12:49 pm
Get a daily rundown of the top stories on Urban Milwaukee 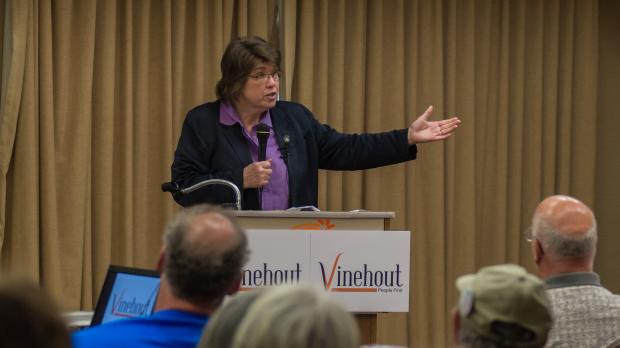 When Kathleen Vinehout walked on stage to give her speech at the state Democratic Convention this year, she was pumping her right fist in the air.

The state senator, who represents a portion of western Wisconsin in the Legislature, had a huge grin on her face and was singing along to her walk-on song, “All Fired Up,” by Pat Benatar.

When she got to the podium, she balled both of her fists, held them to her chest and raised her chin to the sky, totally reveling in the moment.

Vinehout’s enthusiasm isn’t surprising to those who know her, but it’s not usually rock music that gets her going. She’s known for her particular passion for things not everyone appreciates: audits, financial reports, and the Wisconsin state budget.

The senator started writing and releasing her own versions of the state budget in 2011, after Gov. Scott Walker released a budget that cut spending in a number of places, including the University of Wisconsin System.

Vinehout, 59, said she crunched the numbers and didn’t agree the cuts were necessary.

“I kept hearing these stories from the governor that I then knew were absolutely false,” she said. “And I started to realize that there wasn’t anybody else that was really paying attention to the details of the way the budget was constructed and how decisions were made.”

“I’ve taken the same money, I’ve rearranged the priorities. I’ve shown how we can fund what we care about in Wisconsin,” she said.

Vinehout says her budgets “put people first.” They avoid cuts to state programs and fully fund things like the state’s SeniorCare program and additional aid for rural schools by eliminating some of the governor’s tax cuts.

She acknowledges her status as a “policy wonk,” someone who enjoys learning about and dissecting the nitty gritty details of law.

“I believe if you’re going to be a lawmaker, you’d better do your homework — and there’s an awful lot of homework that needs to be done,” said Vinehout, who has been elected to the state Senate since 2006.

However, the senator said she tries to strike a balance between being an approachable lawmaker and someone who can dig into complicated facts and figures.

“I would say I have a nice balance of the down-home folksiness and the policy details,” Vinehout said. “I try to find that balance.”

Sen. Robert Wirch, D-Somers, says state Senate Democrats have come to rely on Vinehout as their own personal budget expert.

“Kathleen is always there with that Ph.D. intellect to dig deeper into issues and give us her opinion, which is certainly highly rated around the Capitol,” he said. “She helps us a lot in policy analysis.”

Wirch said Vinehout often picks up “little things” in the budget others might miss and brings them to the caucuses’ attention.

Vinehout didn’t go to school for economics or policy, she earned her bachelor’s degree in education, has a master’s and Ph.D. in public health, and an associates degree in agriculture.

Aside from her prowess at crunching numbers, Wirch says he appreciates Vinehout’s connection to rural Wisconsin.

“You know when deer hunting season starts out, the governor and (Congressman) Paul Ryan go out into the field for a photo op and then they go home — Kathleen Vinehout gets her deer,” he said.

Vinehout is a hunter. She has said her feelings about guns stem in part from her father, who was a firearm collector and ran a gun repair shop in his retirement.

And though she checks off the boxes of many liberal policies, Vinehout does sometimes stray from the party line when it comes to guns.

Earlier this year, she was the only Democrat in the state Senate to vote against a plan that would’ve reinstated Wisconsin’s 48-hour waiting period for handgun purchases.

“We had the chance with that bill and with several others to actually do a much better job in our state of preventing gun violence and saving lives, and we missed that opportunity,” Bonavia said.

As gun control has risen to the top of many voters’ minds in the wake of increased activism on the issue in the state and across the country, Vinehout said she wouldn’t let politics influence her vote.

“It would’ve been dishonest for me to change my vote just because there’s an election coming up,” she said.

Vinehout also said she’s done research about the value of a 48-hour waiting period and come across a number of studies showing it doesn’t do much to prevent violence.

“There’s a lot of mixed information,” she said. “As things emerge, if there’s more information, I’d be glad to read it and reconsider how I would support it or not support it.”

As for other gun policies, Vinehout said she supports implementing a universal background check in Wisconsin.

Her vote on the waiting period, which could certainly make her unpopular with the base of the Democratic Party, isn’t entirely new for Vinehout.

“She doesn’t stick to all the Democratic dogma,” said Jeff Mayers, president of WisPolitics.com, a political news site.

Mayers said that independent streak could make Vinehout more appealing than other Democratic candidates with Independents in a general election race.

“I have a very different background from anyone else that’s running,” she said.

A big part of that background, she said, is all the time she’s spent reading legislative audits and crunching budget figures. There’s no time for on-the-job training for governor, she said, because whoever is elected will need to present their budget soon after taking office.

“We need somebody who knows the details and can get the job done,” Vinehout said.

And she believes she’s ready to hit the ground running.

4 thoughts on “Race for Governor: Vinehout Is Different Kind of Democrat”