The Republican Love of Big Government

Are Republican states the most socialistic?

When I want a guide to the current Republican prescription for economic prosperity, I turn to Rich States Poor States from the American Legislative Exchange Council (ALEC). In the latest edition, Wisconsin state senator and former ALEC National Chairman Leah Vukmir is quoted stressing the influence these state ratings enjoy among Republican legislators:

State policymakers across America depend on Rich States, Poor States to provide an annual report on their current standing in economic competitiveness. Hardworking taxpayers want their states to follow the best policy solutions that will lead to greater economic opportunity for all. This publication provides exactly that roadmap for economic success in the states.

With its Economic Outlook Rank ALEC rates each state’s economic policies. The Outlook is described as “a forward-looking forecast based on the state’s standing (equal-weighted average) in the 15 important state policy variables shown below.” One of those 15 is the number of public employees per 10,000 of population. The higher the ratio of government employees to the overall population the worse a state scores in the ranking, on a scale where 1 is best and 50 is worst.

The implication is that the fewer the number of public employees in a state, the better off a state will be—particularly that the state will be more prosperous without having to support numerous government bureaucrats. Do Republicans actually believe this and act on it?

The notion that hiring people to work for the government in and of itself is harmful has long been a component of standard Republican and conservative dogma. This is reflected in Wisconsin Governor Scott Walker’s practice of promising to create additional private sector jobs, with the emphasis on “private.”

But do states dominated by Republicans follow ALEC’s prescription? To explore this question, I compared the percentage of the population working for the state or local government in each state to the percentage of that state’s 2016 vote for Donald Trump versus Hillary Clinton. Every month, as part of its jobs report, the US Bureau of Labor Statistics publishes its estimates of the number of local, state, and federal employees in each state.

The first graph shows the relationship between Trump support and the number of public sector jobs in states that voted for Clinton in the 2016 election. The trend line is almost perfectly flat, indicating that there is no relationship between the amount of such support and the decision as to how many such employees are needed to best serve the public.

This conclusion is underlined by the coefficient of determination, shown as R2 on the chart. The common interpretation of the coefficient is that it shows the percentage of variation in one variable (the number of public employees) explained by the other variable (the Trump vote). Thus, in states that went Democratic, even though the number of public employees varies considerably from one state to another, that variation has no relationship to the strength of the Democrats. 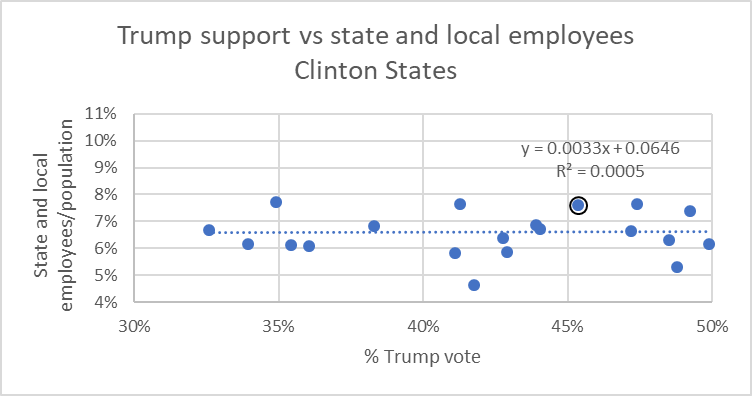 With states that voted for Trump, the story is quite different. Statistically, the greater the Trump margin, the larger is the number of public employees. Using the common interpretation of the coefficient of determination, one could say that 41% of the difference in public employees is explained by Republican dominance. 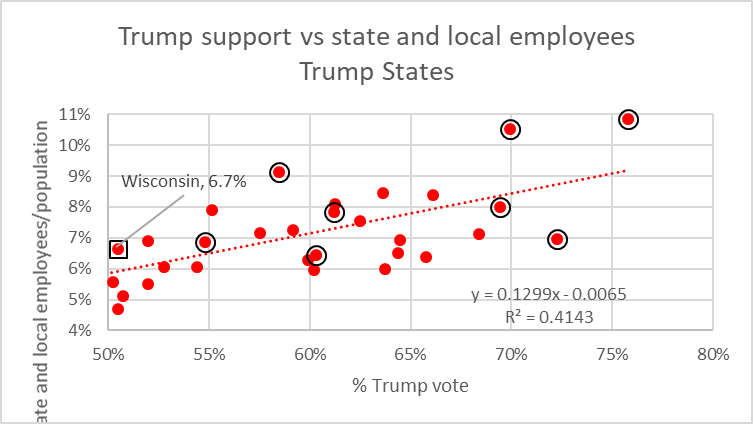 It should be emphasized that the relationship is a statistical construct; it does a poor job of predicting public employment at any particular state. Still, in practice, states dominated by Republicans as a whole act contrary to current Republican and conservative dogma. What explains this relationship?

Part of the explanation is the role played by severance taxes on the extraction of natural resources, notably oil and coal. Unlike other state taxes, which fall mostly on state residents and businesses, the burden of a state’s severance taxes falls on consumers wherever the resources are consumed. In effect, residents of a state that funds, say, 20% of its budget using severance taxes, are receiving a 20% discount on the cost of public services.

In the two charts above, states in which severance taxes form at least 5% of total tax revenues, according to the National Conference of State Legislatures, have circles drawn around them. Except for New Mexico, all went for Trump.

The three states with the highest proportion of public employees—Alaska, North Dakota, and Wyoming—are also the three who get over 20% of their taxes through severance. This behavior is perfectly consistent with the standard model of a market economy: if the price of a good or service goes down demand for it goes up.

However, it flies in the face of ALEC’s underlying assumption that more public employees hurt economic competitiveness. If so, why would the states buy more, no matter how low the price?

Eliminating the states where severance taxes play a major role reduces the strength of the relationship between the Trump vote and public employees, dropping the coefficient of determination to 31%. Although lower, this is still a significant relationship, leading to the somewhat ironic conclusion that the most Republican states are the most “socialistic.”

Without going through a state-by-state analysis, one cannot determine other good reasons that the most Republican states have larger bureaucracies. Many of them are rural with small populations; perhaps it takes more employees to service a population that is more spread out. In addition, such states may find it more difficult to contract-out public services, reducing public employee count.

Wisconsin, according to ALEC, has the 15th smallest public employee to population count of all US states. However, when compared only to the states voting for Clinton, Wisconsin falls almost exactly in the middle, with 6.7% compared to an average of 6.6% for the Clinton states.

Asking whether we need more–or fewer–government employees is the wrong question. It leads to bad policy. It short circuits the more basic questions: what is the problem we are trying to solve and which possible solutions are most effective.

15 thoughts on “Data Wonk: The Republican Love of Big Government”