Some question his ability to be tough in campaign against Gov. Walker.

By Laurel White, Wisconsin Public Radio - Jun 6th, 2018 02:39 pm
Get a daily rundown of the top stories on Urban Milwaukee

Even though he hasn’t been a classroom teacher for years, Wisconsin schools Superintendent Tony Evers has the sort of personality you could see coming in handy in a room of unruly elementary school kids.

He’s calm and quiet. And polite. Some opponents might say a little too polite for politics.

When you ask the Democratic gubernatorial hopeful about one of the biggest political issues of the day, Foxconn, he makes it clear he thinks it was a bad deal for the state, but prefaces his answer with, “It’s not that I want to be a jerk about this…”

It’s that type of answer that has some in his party questioning whether Evers is tough enough to beat Republican Gov. Scott Walker.

Evers, 66, is one of several Democrats angling to win the party’s gubernatorial primary and challenge Walker, who’s seeking a third term in November’s general election.

“He can’t take it,” liberal radio host Mike Crute said of Evers on his “Devil’s Advocates Radio” show last month. “He’s a bad debater and he’d be horrible on the stage next to Scott Walker.”

Jeff Mayers, president of WisPolitics.com, a news service for political insiders, acknowledges Evers is not what some Democrats in Wisconsin are looking for right now.

“I think a lot of rank-and-file Democrats are looking for the passionate leader who will go out there and, you know, cut up Republicans and lead them to resurgence,” Mayers said.

But Evers pushes back on the criticism. He says being a loud, tough, aggressive candidate isn’t what is going to win this race for Democrats.

“Shouting does not translate into leadership,” he said. “I am who I am. Honest to God. I’ve been doing this for a long time, so I don’t feel any pressure to change.” 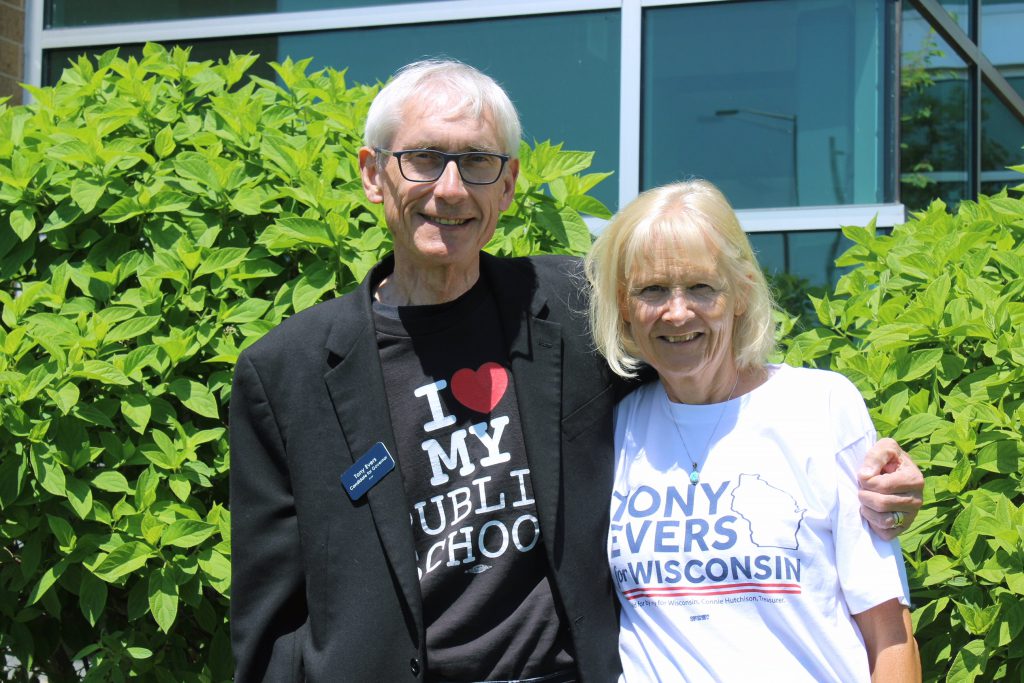 Evers has the political standing to run for governor in part because of his quiet, steady personality. He has years of experience as a successful behind-the-scenes guy running Wisconsin’s Department of Public Instruction. He’s an education policy expert.

He argues his years of experience with education have prepared him to govern the whole state. At the root of his argument is how education touches so many things.

“People recognize the importance of education for economic development, for our democracy, for having good health systems, for having a well trained workforce,” he said. “All of those things begin in our K-12 education system, University of Wisconsin System, tech college system.”

Evers does get animated when he talks about how overseeing school curricula on Wisconsin’s natural resources has prepared him to guide state environmental policy. He also points out that he has the executive experience necessary to be a good governor.

According to state figures, the department oversees about 100,000 full-time staff and 860,000 students.

Evers talks about the power of his name recognition and his record of winning elections a lot in his campaign. He says he brings to the table one very big thing Wisconsin Democrats are looking for in 2018: “They’re looking for somebody who can beat Scott Walker, for starters,” he said.

But while Evers does emphasize his statewide name recognition, he also says, at the end of the day, people cast ballots for candidates they think have the right values.

Evers supports putting more money into schools, implementing universal background checks for gun sales, and chipping away at Walker’s moves to limit the power of union workers in Wisconsin. He says he’d move toward a full repeal of Act 10 by going “piece by piece,” doing things like walking back Wisconsin’s Right-to-Work law and reinstating the prevailing wage for workers on state projects.

“Education, workforce issues, healthcare, natural resources … all those things, at the end of the day, are around what our values are as a state,” he said.

Evers says Wisconsin voters appreciate — and will come to appreciate, as he meets more of them — that he’s an “authentic” candidate. He’s open and true to who he is. He’s not going to change, just because he’s running for governor, even if some people might want him to.

6 thoughts on “Can Tony Evers’ Laid Back Approach Win?”