Have Democrats figured out what it takes to beat Walker?

By Shawn Johnson, Wisconsin Public Radio - Jun 5th, 2018 03:50 pm
Get a daily rundown of the top stories on Urban Milwaukee 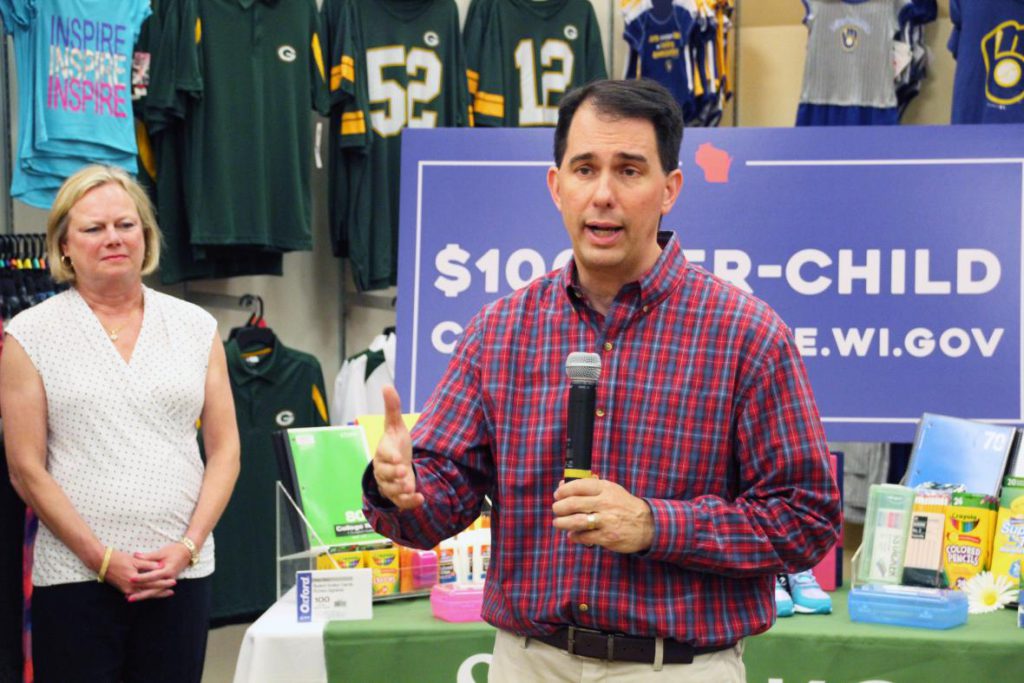 When Wisconsin Gov. Scott Walker stopped at a Shopko department store in the Waukesha County village of Sussex recently to promote his new $100-per-child tax credit, the mood was relaxed, and so was Walker.

About a dozen reporters showed up, and about a dozen employees did too. Walker talked to a few of them on his way in about what he’d heard from a parent of 10 children at a previous stop.

As he moved to a microphone in front of the kids’ sportswear section, Walker said the child tax credit was another way to give back to taxpayers. He said Democrats who call the checks election year bribes are really just knocking him.

As Walker seeks his third term as governor, and pursues his fourth general election victory in the past eight years, it’s events like these that are defining his campaign.

Observers say the approach is likely driven by what’s worked for Walker in the past, and it’s made possible this year because Democrats are still months away from picking a nominee out of a crowded primary field.

The governor’s positive approach so far has carried over to his advertising, where, with money spread thin among Democrats, Walker is the only candidate who’s purchased TV ads.

He’s run four of them so far, all touting accomplishments. Three ads promote people who got private sector jobs with help from state government.

Larry Sabato, the director of the Center for Politics at the University of Virginia, said Walker’s positive approach could be aimed more at casual Democratic voters than it is at Republicans.

Those voters might not like Walker’s more controversial policies, Sabato said, so Walker is giving them something else to think about.

In addition to the latest round of tax cuts, Walker is using other recent accomplishments to make his pitch. The current state budget spends more on schools. Wisconsin’s unemployment rate, which stood at 2.8 percent in the last monthly estimate, is at an all-time low.

The last few years, however, have not been without controversy.

In 2014, Walker dismissed suggestions that he would sign a right to work law or run for president. In 2015, he did both.

And last year, Walker negotiated a contract that could pay electronics giant Foxconn Technology Group up to $4.5 billion in taxpayer money to build flat screen displays at a new plant in southeast Wisconsin.

Walker has toured the state to promote the deal, while U.S. Rep. Mark Pocan, D-Madison, said he tells the governor’s opponents that Foxconn is what will help them win in 2018.

“I have told them all the exact same thing,” Pocan said recently. “That Foxconn is radioactive toxic across the state, not just in my district but anywhere I go.” 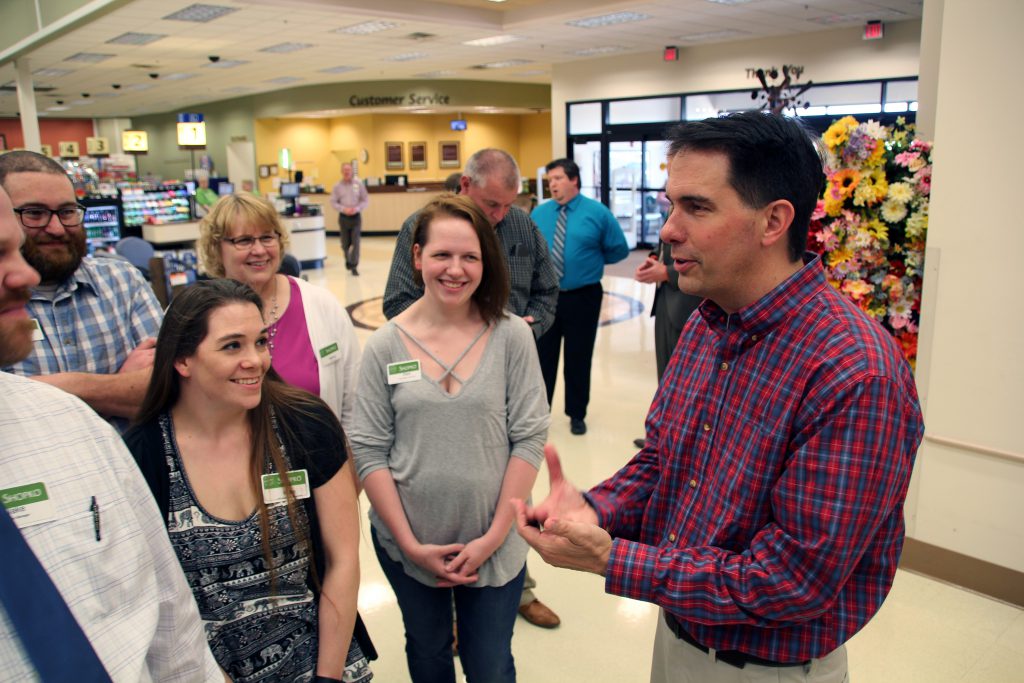 Walker speaks to Shopko employees during a campaign stop in Sussex. Shawn Johnson/WPR

Still, there are at least some Democrats who worry their party still hasn’t figured out what it takes to beat Walker.

Consultant Scott Wittkopf, who is advising Democrat Mike McCabe in the governor’s race, said the party’s focus since Walker took office has been to attack him.

“The problem with that is that that resonates with the choir,” Wittkopf said. “And the slice of the pie in terms of political discourse that aligns with the choir has been shrinking.”

“It’s easy for him to do because conservatives for the last 60 years have done such a great job of laying the foundation for these, what we call ‘deep frames,'” Wittkopf said. “These ideas that evoke their values and their ideas unconsciously.”

Wittkopf contends that when Democrats try to fight Walker on those grounds, instead of establishing their own political “frame,” they lose.

Former conservative talk radio host Jerry Bader, who’s now the communications director for MediaTrackers.org, said when Democrats pledge to repeal Walker’s accomplishments, like Act 10, the law that effectively ended many public-sector unions in the state, they play into his hand. Bader said it lets Walker run a campaign that’s similar to his 2012 recall victory.

“It gives him, perhaps, an opportunity to reignite that passion,” Bader said. “‘Hey, we did it, you protected it, you need to protect it again.'”

Bader thinks Democrats have demonized Walker so much that they’ve lost credibility.

“A lot of the gloom and doom stuff that they predicted did not come to pass,” Bader said.

Walker has even gone so far as to suggest this year that Democrats are filled with “anger and hatred” toward him, referencing a comment by state schools Superintendent Tony Evers, one of the many Democrats running for governor, who said Walker was an “idiot” for rejecting federal Medicaid funds.

“I think a lot of voters are shocked to think that people who hold office would call other people in office things like that,” Walker said.

There is, of course, a more prominent officeholder who insults people on a regular basis.

President Donald Trump, the leader of the Republican Party, is known for calling people names when they cross him. But Walker downplays suggestions that Trump makes his case more difficult.

“You know, Washington is a whole different place,” Walker said. ” I think the contrast is, if people don’t like what’s happening in Washington with anybody – Democrat, Republican alike – if they don’t like the tone there, we’re the cure to that. In Wisconsin, we get things done.”

It’s a fine line for Walker, who supports Trump and has said he would campaign with the president if he returns to Wisconsin.

Walker’s political instincts have served him well in Wisconsin, but at least 10 Democrats are hoping they’ll be the one to end the winning streak.

As Democrats Line Up Against Him, Walker Takes Upbeat Approach was originally published by Wisconsin Public Radio.

16 thoughts on “Walker Runs Race on His Own Terms”