Its economic problems stem from political gridlock over how to pay for its commitments. 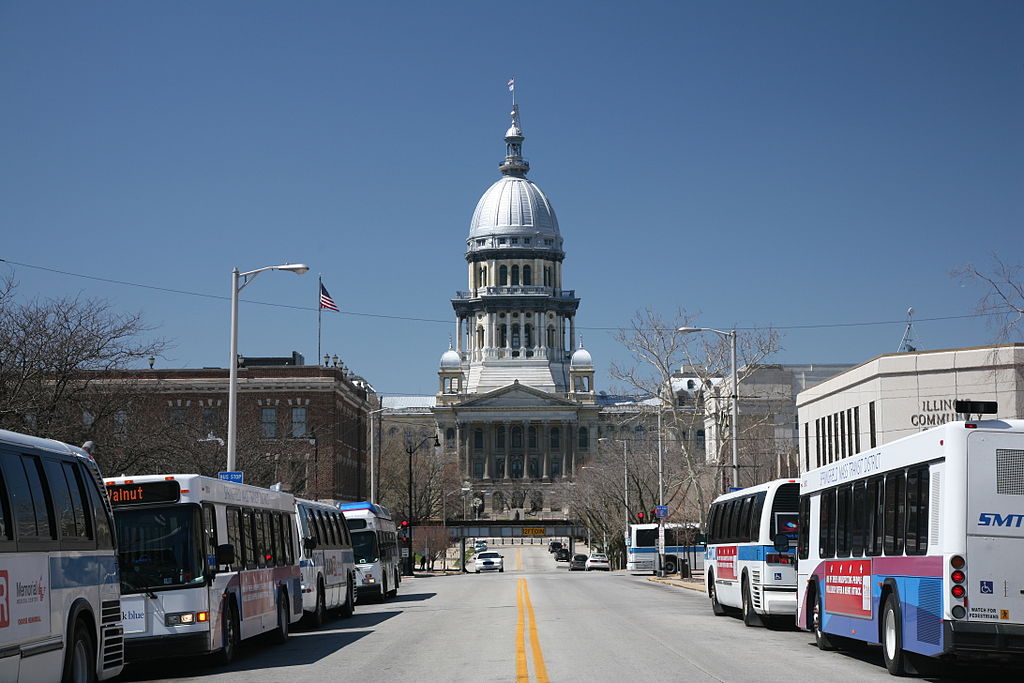 One question that commonly arises in comparisons between Wisconsin and Minnesota is what about Illinois? On almost every measure, Minnesota has performed better than Wisconsin. This better performance has occurred during a period that Minnesota had a Democratic governor while Wisconsin’s was, and is, Republican.

During this period Illinois has underperformed all of its neighbors. At the same time, Illinois has been a reliable Democratic vote in presidential elections. Does it follow, therefore, that Illinois’ underperformance results from “liberal” or Democratic economic policies?

The most obvious cause of Illinois’s problems is its extreme underfunding of its pension obligations to public employees. For years, the state was placed at or near the bottom when it came to funding its commitments to future retirees.

For example, here are the ratios of assets to liabilities for Wisconsin, Minnesota, and Illinois from the latest report on public pensions from the Pew Charitable Trusts. Wisconsin has a long-standing reputation under Republican and Democratic governors and legislature of running a well-funded state pension plan (as does the City of Milwaukee, but not Milwaukee County). 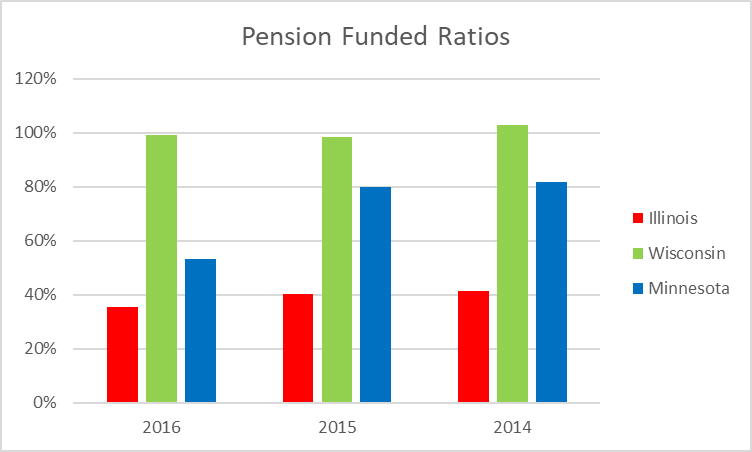 Probably more damaging than the underfunding itself is the inability of the politicians heading Illinois government to agree on a strategy to make up the deficit. The state’s Republican governor seems intent on leveraging the crisis to cut taxes and services, solutions that are unacceptable to the Democratic majority in the legislature. The impasse has led to great uncertainty both as to future tax rates and the continuing availability of public services.

In the short run, not fully funding pensions can be very attractive to elected officials. Two actions are almost guaranteed to bring down the wrath of one or another group of angry voters: raising taxes and cutting services. Promising more generous pensions to employees, instead of more pay, shifts the problem of paying for the pension to the future. Who knows what the next election will bring? It is disappointing, but not surprising, that governors, legislatures, and other elected officials fall to the temptation.

Failing to adequately set aside funds for future retirees is not conservative governance; nor is it liberal governance; it is simply bad governance. There seems to be some evidence that divided government makes the problem. Each side can point to the other as the culprit: Democrats for expanding programs, Republicans for refusing to fund the pensions. According to Pew, Illinois is not even the worst case at least in 2016, the last year for which data are available. Two other states—Kentucky and New Jersey—are worse.

Although accounting standards are getting more stringent. There is still a lot of room for squishiness. Determining the soundness of retirement accounts requires projections of the account’s future returns and of the future payouts. Both offer abundant opportunity for manipulation.

Consider Minnesota’s 2016 pension shock. The projected cost of its obligations jumped from $75 million to $109 million between 2015 and 2016, causing its ratio of assets to liabilities to fall from around 80% to 53%, resulting in Minnesota plunging from 18th place to 43rd place in Pew’s estimation.

In trying to understand the causes, it is easy to get caught in the weeds. See this Bloomberg explanation of what happened in Minnesota. (Part of the problem is that Minnesotans are living longer, for instance.) It appears that the major cause, however, was a decision by the state pension board to switch to a lower discount rate in calculating the present value of future obligations. Unlike Illinois, the Minnesota governor and legislature was able to reach a compromise on a bill that “puts the plans of the state’s four public pension systems on the path toward full funding …”

Although Illinois is widely viewed as a blue state because of its recent record of supporting Democratic presidential candidates, from a “who pays” angle it looks much more like a red state, collecting a much higher proportion of taxes from low earners than high earners. The next chart, based on data developed by the Institute on Taxation and Economic Policy (ITEP) shows that low-income Illinois residents pay a substantially higher proportion of their income than those with higher incomes, particularly the top 1%. 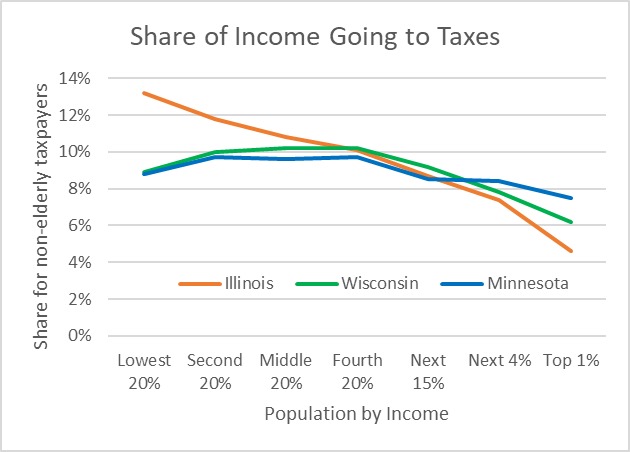 ITEP has also developed an index of tax inequality, arranging the states (including the District of Columbia) in order of decreasing inequality, puts Illinois as the fifth most unequal in the tax burden, as shown in the plot below. Wisconsin and Minnesota come in at 37th and 45th respectively. 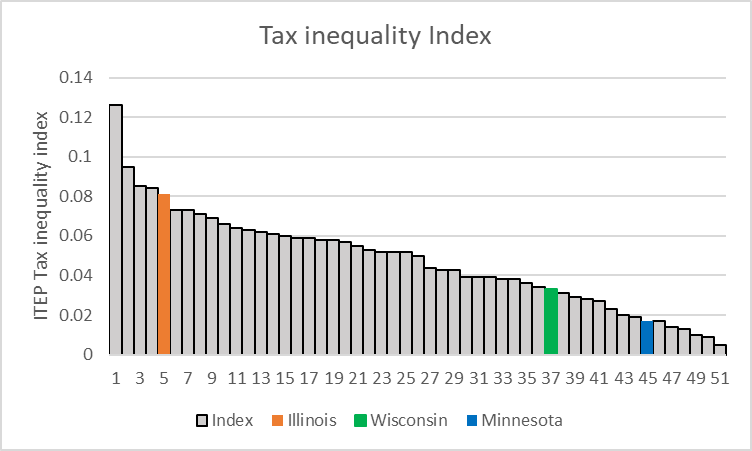 The explanation for Illinois’ low fairness, is that its income tax is a flat tax, as required by the state’s constitution. Thus, unlike in Wisconsin and Minnesota, it is unable to compensate for inherently regressive taxes, notably sales taxes.

This conclusion is confirmed by the conservative American Legislative Exchange Commission (ALEC), a group driven by its belief that America suffers from too little inequality. Thus, ALEC waxes enthusiastic about this lack of progressiveness. In response to its pension crisis, the Illinois legislature overturned the governor’s veto to raise the income tax rate from 3.75% to 4.95%, causing ALEC’s rating of Illinois progressiveness to decline from 12th to 16th. 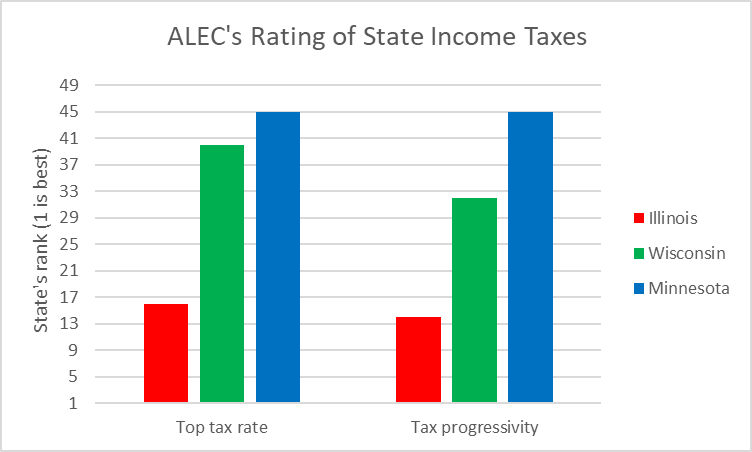 ALEC’s enthusiasm for the regressiveness of Illinois’ taxes doesn’t extend to others of the state’s policies. ALEC is particularly unhappy with Illinois’ inheritance tax and lack of a right-to-work law. As a result, it rates Illinois 48th overall.

It appears that the Illinois economy is likely to suffer so long as its political establishment is unable to agree on how to pay for the commitments it has made. Doing so would be eased if the constitution were amended to allow graduated taxes. Without that change, low-income taxpayers will be particularly hard hit.

An Illinois-based organization, the Center for Tax and Budget Accountability, has issued a proposal for a graduated income tax that according to its calculations would allow both cutting taxes for the middle class and shrinking the deficit. Probably not coincidentally, the proposal would set the top rate at 9.85%, the same as Minnesota’s. The proposal calculates that under this “approach, anyone making under about $314,000 of taxable income—or more than 98 percent of Illinois taxpayers—would see a tax cut of up to $450 from current law.”

Whether or not the constitution is changed is likely to depend on the outcome of this November’s election. The Democratic candidate for governor has endorsed amending the constitution. By contrast, the Republican incumbent seems to believes that the answer lies in cutting public programs.