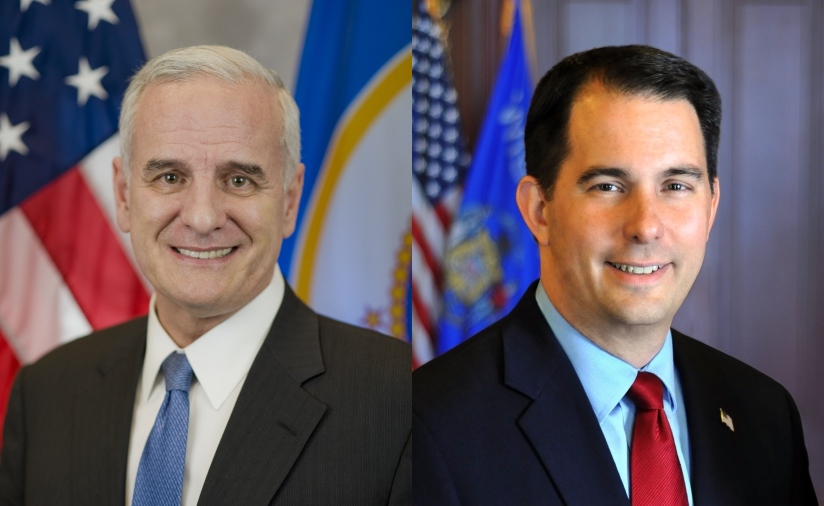 On every economic measure, Cooper found that Minnesota outperformed Wisconsin:

The big question in comparing states, of course, is how much of the economic differences can be attributed to the difference in the governors’ policies and how much to other differences between the states.

Recently the Journal Sentinel published a response to Cooper from John Phelan. Phelan is described as an “an economist at the Center of the American Experiment, a think tank based in Minnesota that advocates for free markets and limited government.”

Although Phelan starts by asserting that “on some important measures Wisconsin’s economy has actually outperformed Minnesota’s,” he mentions only two: the states’ economic growth as measured by the gross domestic product (GDP) and their unemployment rates.

On GDP, Phelan criticizes Cooper’s use of annual data, characterizing it as one of Cooper’s “strange choices,” asserting that “using quarterly data is better because it allows us to select a more precise base period for our comparison.” What he does not mention is that quarterly data serves his purpose better because of its fluctuations. As the next chart shows, Phelan’s argument that GDP grew more in Wisconsin is the result of these fluctuations (like the last quarter of 2017) rather than the long-term trends (shown with dotted lines) over the period of the fourth quarter of 2010 through fourth quarter of 2017. 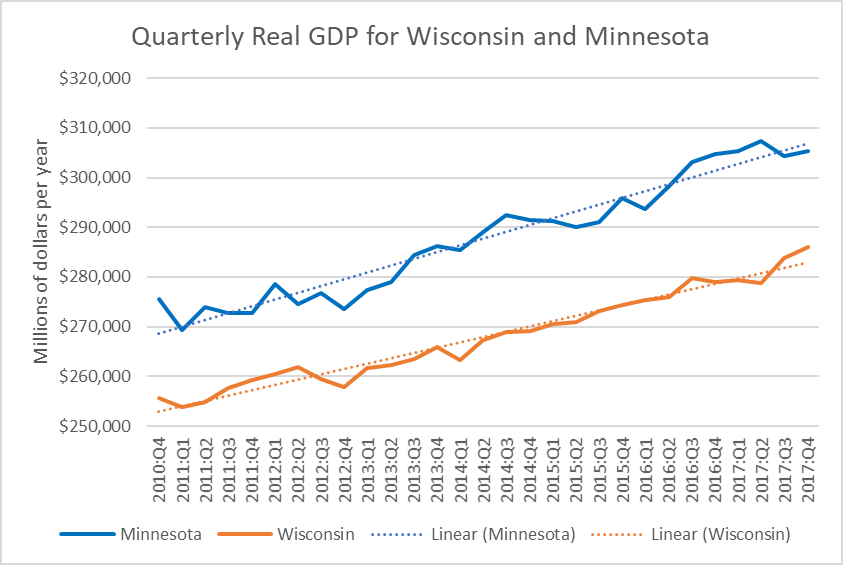 Annual GDP figures smooth out these fluctuations, as shown in the chart below, allowing us to view long-term trends from 1997 through 2017. Until the start of the new century the states’ GDPs were about the same. Then a gap opened. Since the recession, the GDP gap has been widening. 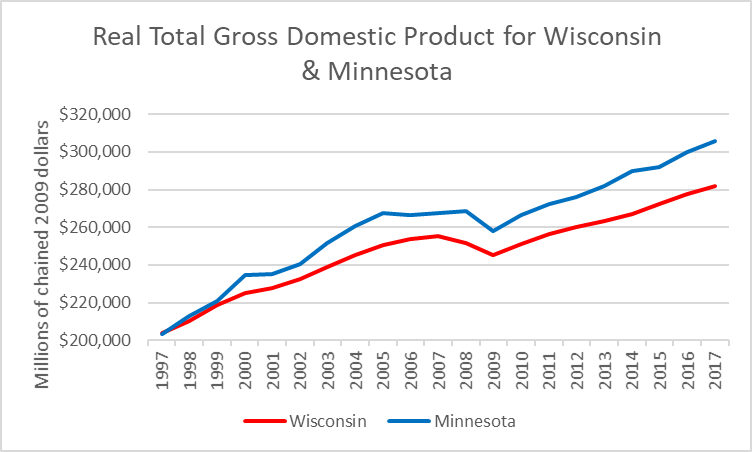 The next chart shows annual GDP behavior since 2010. In order to eliminate Wisconsin’s lower GDP at the starting gate, these are shown as indices, in which the 2010 GDP has been set to 100. 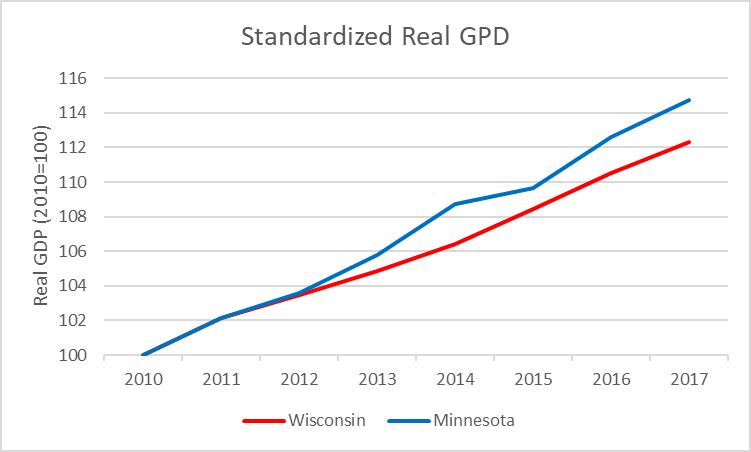 Interestingly, using this measure, the two states’ performance didn’t diverge until 2013 when Democrats took control of the state legislature and started enacting Governor Dayton’s proposals. This may address the concern expressed in my previous column that Minnesota’s superior performance started even before the enactment of Dayton’s proposals.

The other issue that Phelan brings up is unemployment. When the two governors assumed office in January of 2011, unemployment in both states was below the national rate but still very high—8.0 percent in Minnesota and 9.1 percent in Wisconsin. Around 2013, Minnesota’s unemployment rate started shrinking faster than Wisconsin’s, hitting a gap of 1.8 percent. Again, coincidentally or not, this was about the time that Democrats took control of the state legislature. 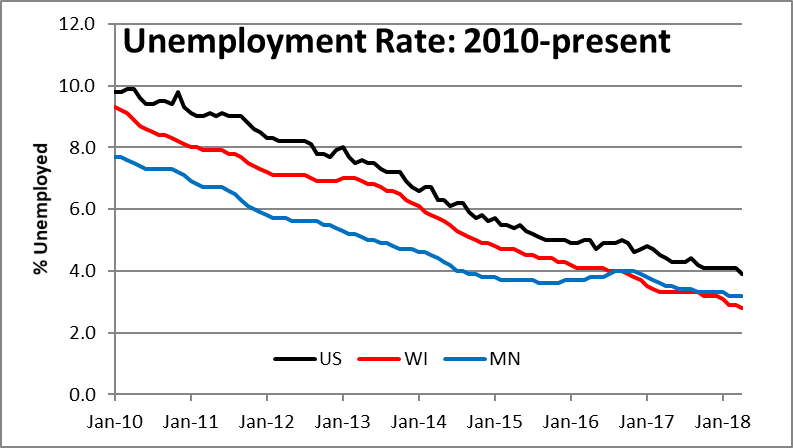 After falling below 4 percent, Minnesota’s unemployment rate decline stalled, allowing Wisconsin to catch up and eventually fall slightly below Minnesota’s. What happened? I should stress that the following discussion is speculative, but consistent with the data.

When unemployment rates decline, the most obvious cause is that people get jobs, but there are other mechanisms. One possibility is that unemployed people leave a state’s workforce by moving to another state. It appears that may have occurred in Wisconsin. As the next chart shows, between 2011 and 2015, Wisconsin’s workforce was flat. If enough unemployed Wisconsinites moved to Minnesota, Wisconsin’s unemployment rate would decline and Minnesota’s increase while the new arrivals searched for jobs in Minnesota. 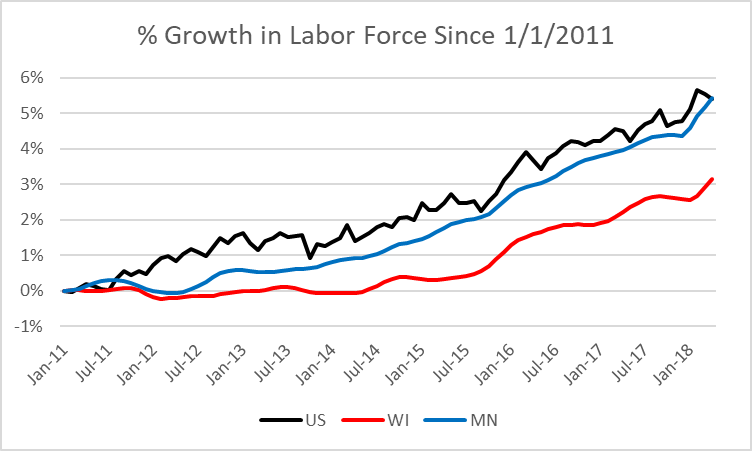 Under Walker, Wisconsin has an image problem. Minnesota benefits from articles with titles like Why Minnesota Is the Perfect Place for Millennials, “where affordability, career opportunities and urban amenities come together.” The net migration figures reported by Cooper reflect this. Between 2010 and 2017, Minnesota’s net domestic and international migration—the difference between those moving to the state and those leaving–was plus 71,000. By comparison, to Wisconsin had a net loss of 18,000.

The GROW Wisconsin legislation that promises to help pay student loans if graduates move to Wisconsin is a tacit acknowledgment that Wisconsin has fallen short in attracting people starting their careers. By promising companies low labor costs, Wisconsin may have hurt its ability to attract workers.

Out of the seven broad topics addressed by Cooper, Phelan chooses only unemployment and economic growth to discuss. It is surprising that he is unable to identify any areas in which Wisconsin has a clear advantage.

Among the topics that Cooper analyzes, but Phelan does not, is health insurance. Cooper found that Minnesota did better on insuring its residents. A recently-released report from Gallup indicates that the Minnesota advantage grew in 2017. The chart below shows Gallup’s estimates by state of the percentage of people without health insurance. Wisconsin’s increase in uninsured residents is statistically significant; Minnesota’s is not. Reflecting the Trump administration’s hostility to health insurance, no state had a statistically significant decline in the number of uninsured people. 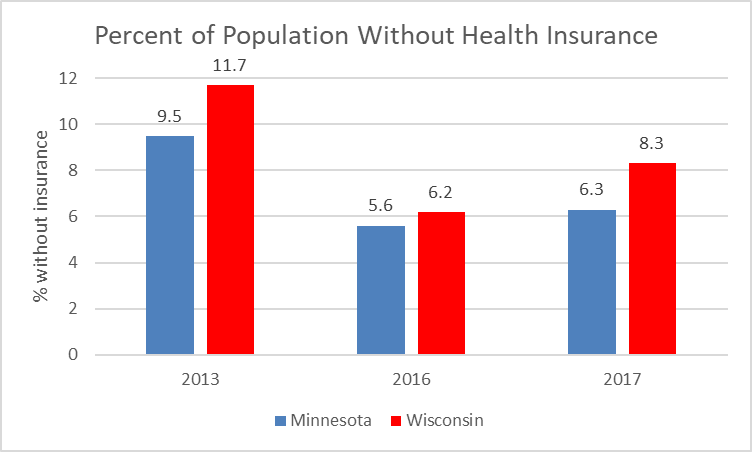 Percent of Population Without Health Insurance

Why has Wisconsin done worse than Minnesota on insuring its residents? It can be argued that Wisconsin, unlike other states that refused to accept the federal Medicaid expansion funds, did make health insurance available to most its residents. Perhaps it is hard to promote health insurance in a political environment whose leaders are intent on destroying Obamacare.

Rather than arguing that the performance gap between Wisconsin and Minnesota is not real, Phelan might be more successful at showing it does not reflect state policy. Unfortunately for him, this approach would violate conservative orthodoxy that prosperity results from low taxes, few regulations, and keeping labor costs low.