Why Jazz in the Park Endures

Now 27, it offers a great venue, great music and a music booker who looks for variety. 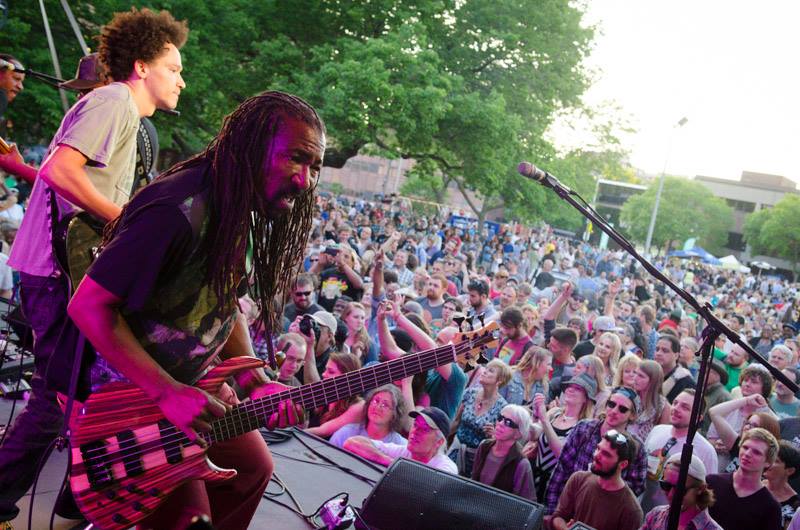 Jazz in the Park. Photo by Melissa Miller.

The annual music outing is presented by the East Town Association, whose history goes back more than half a century, to the early 1960’s when a group of East Town merchants began working together to spur the growth of the business community in downtown Milwaukee.

Officially incorporated in 1983, the association has made great strides toward improving the health of the business community and creating a vital neighborhood for corporations, retailers, restaurants, and service providers. Today over 200 businesses, members of East Town Association, are committed to the economic growth and vitality of downtown Milwaukee.

And Jazz in the Park, launched in the early 1990s, has become a showcase for the East Town area. “We usually draw between three and four thousand people,” Ertl says. “We always hope for an enthusiastic and responsive audience, and we almost always get that.”

When discussing Jazz in the Park’s longevity, Ertl is quick to make the distinction between Summerfest and a music series. “Summerfest is a different animal, in an entirely different league. That’s a festival, not a series.”

So where does Ertl find all these stellar jazz acts to fill Cathedral Square Park?

“Our bookings are primarily a regional thing,” Ertl said, calling from his summer home in upper Michigan. “Chicago has an awesome jazz sound, and there’s a strong jazz representation in Madison, Milwaukee and the Fox Valley,” Ertl said. “If we happened to pick off a national act that’s touring and we can get them on a Thursday night, we do that too. Most of our acts are from northern Illinois, Minnesota, Wisconsin and Chicago. ”

Ertl says when he books Jazz in the Park, he shoots for a diversity of jazz styles: “There are multiple styles. I recently had a conversation with the executive director of the Sioux Falls Jazz Festival and he said if you asked 10 different people what jazz is, you’d get 10 different replies.”

Ertl notes that a younger generation of students and musicians is providing their own influences and interpretations. He feels that’s also what feeds the series’ always diverse audience. “It’s comprised of high school students to Baby Boomers. I think younger kids understand a lot of quality jazz and we should attribute that to some incredible music programs that have expanded that fan base. People are willing to experiment with music if you give them a chance.” 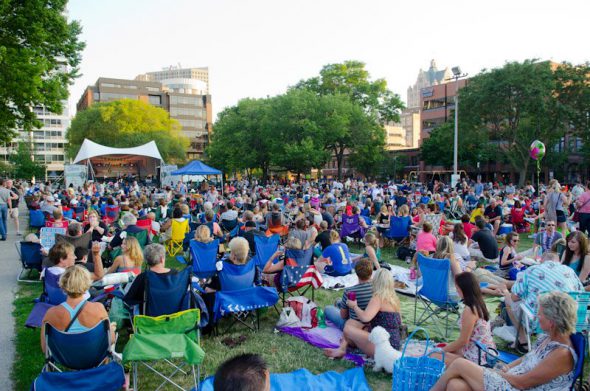 Cathedral Square Park is full of people enjoying Jazz in the Park. Photo by Melissa Miller.

British musicians have long had deep roots in jazz. “The UK has incorporated jazz and blues influences,” Ertl notes. “One of the legendary blues guys in Europe will probably surprise you. It’s Tom Jones. Yes, the guy who made it big with ‘It’s Not Unusual’ in the 60s on the Ed Sullivan Show.”

Or take an R&B musician like Ray Parker Jr., best known for doing the movie theme song “Ghostbusters. Ertl recalls hearing him perform at A Taste of Colorado. “After his show I walked up to him and said his style of music would work in jazz. He just smiled, gave me the biggest hug and said, ‘Finally, somebody gets me.’”

In addition to Jazz in the Park, Ertl books locally for Bastille Days, Watertown Riverfest and Major Goolsby’s.

Ertl says he tries to spread the wealth in terms of acts for Jazz in the Park. “We try not to repeat an act for at least two or three years,” he notes, and yet “cover all the bases.”

By any measurement, Jazz in the Park has been a huge success. The mission of East Town Association has been to use its events and programs to cultivate a vibrant community experience, enhancing the neighborhood image and appeal. This concert series serves that mission each and every summer.

Jazz in the Park Gallery 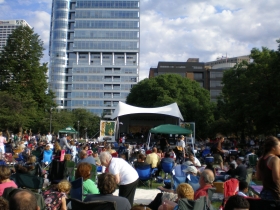 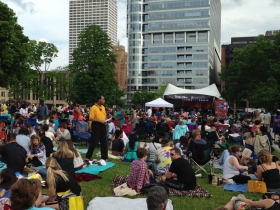 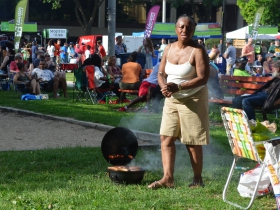 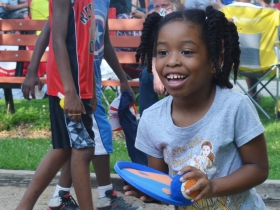 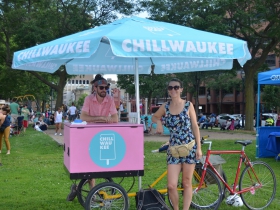 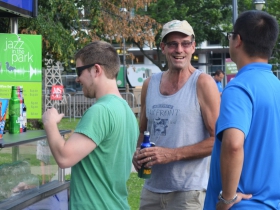 2 thoughts on “Why Jazz in the Park Endures”