He’s a patriot and man of character. Contrast this to Trump, Vukmir and Nicholson. 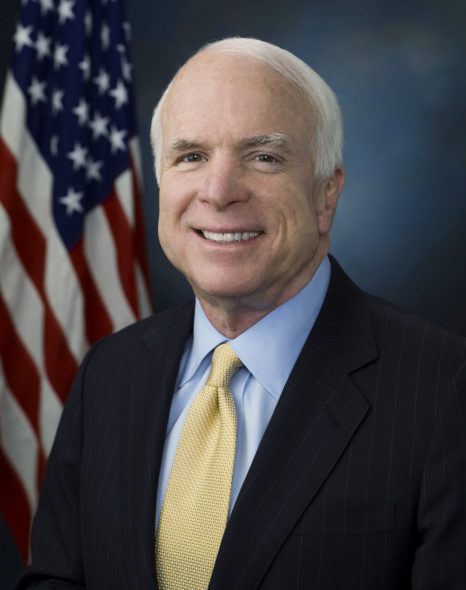 Sen. John McCain, who chairs the Senate Armed Services Committee, recently urged his colleagues to vote against confirming Gina Haspel, Donald Trump’s nominee for director of the Central Intelligence Agency. McCain opposed Haspel, who oversaw the torture of captives at a CIA prison in Thailand, because, in his words, “Her refusal to acknowledge torture’s immorality is disqualifying.”

Tragically, John McCain was not on the Senate floor to cast a vote against Ms. Haspel when she was confirmed last week. He is home in Arizona suffering from the late stages of brain cancer. He probably will not be able to return to Washington to serve out his term in the Senate.

John McCain is a conservative and a Republican. I disagree with him on many issues and actively opposed him when he ran for president. None of that stops me from greatly admiring the man and considering him a model of what a patriot and public servant should be. McCain’s life and character contrast sharply with the sad decline in the decency and dignity of today’s national politics.

Even though John McCain suffered greatly as a prisoner of war in Vietnam, he refused to be released and abandon his fellow prisoners. McCain’s commitment to country while serving in uniform carried over to his service in Congress. In many ways, he exemplified an era when bipartisan cooperation was not a deplored concept. A shining example is the campaign finance reform legislation championed together by John McCain and Russ Feingold.

A bipartisan approach was once common in Wisconsin as well. When I was developing the Stewardship Fund, I worked with Gaylord Nelson, a former Democratic governor, and Warren Knowles, a former Republican governor. That fund, the largest conservation effort in state history, which has protected over 600,000 acres of our outdoors, is appropriately named for those two statesmen.

McCain was not afraid to buck his party when called for, whether denouncing indecent tweets and statements by Donald Trump, voting against the dismantling of affordable health care or opposing the current CIA nominee. What has been so disappointing is the vitriol directed at him by his own party. The most shocking example is a White House official mocking McCain’s illness, dismissing his thoughtful concerns because “He’s dying anyway.” Even more appalling is the refusal of the Trump administration to apologize, but then again, they are following the example of Trump himself, who criticized McCain’s service because he was a prisoner of war. Former Vice President Joe Biden hit the nail on the head when he said, “Given this White House’s trail of disrespect toward John and others, this staffer is not the exception to the rule; she is the epitome of it.”

The two Wisconsin Republican candidates seeking to join John McCain in the Senate provide a striking contrast to his decency. Leah Vukmir has smeared our senator, Tammy Baldwin, for siding with John McCain in opposition to torture. Because of Baldwin’s agreement with McCain, Vukmir issued a press release with Baldwin’s image next to a terrorist leader which says that Baldwin is part of “Team Terrorists.”

The other Republican candidate seeking to oppose Baldwin is Kevin Nicholson. Not to be outdone in sleaziness by Vukmir, he attacked the “cognitive thought process” of veterans who are Democrats. He was scolded by Sen. Tammy Duckworth, who lost both legs serving in Iraq. She said, “It is beneath any serviceman or woman to politicize veterans and assert that patriotism is limited to members of one political party.”

John McCain must be saddened to see the ugliness and indecency that has overtaken and degraded his party.