Why would a Republican governor be as anti-highways as Scott Walker? 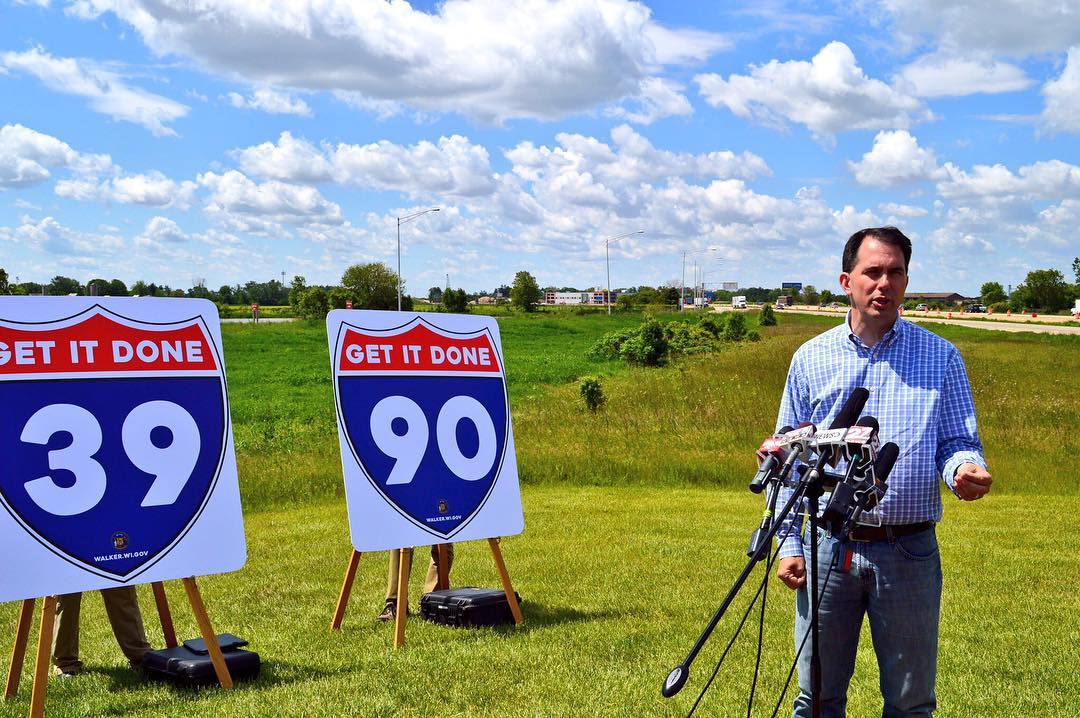 If you’re a disenchanted GOP supporter of Gov. Scott Walker looking to take some shots at him, the liberal Cap Times in Madison is the perfect venue. And so former transportation secretary Mark Gottlieb talked to reporter Katelyn Ferral and the Cap Times gave Gottlieb plenty of space to air his complaints.

Gottlieb charges that Walker didn’t want a real transportation plan or a comprehensive, well-thought-out approach to the state’s growing highway needs. “They wanted the department to submit a budget that pretended if we just went along like we were… everything would be fine,” he told the newspaper. “We got to a place where the facts were being ignored in favor of political spin.”

Gottlieb, I should note, is a Republican of long-standing with a sterling reputation, and arguably one of the best appointments Gov. Walker ever made. A navy veteran and trained civil engineer, Gottlieb “worked on public road projects on the local and state level for more than two decades, served in the Assembly for eight years and is a former mayor of Port Washington,” as Ferral reports.

Gottlieb was ranked as one of the 10 best legislators in a February 2009 Milwaukee Magazine feature, where he won raves from observers. “Scary smart,” said one observer. “The more complicated the bill, the more likely they’ll come to him for help.” Gottlieb, said a legislative staffer, was a detail man on budgets on par with longtime, legendary Legislative Fiscal Bureau head Bob Lang.

Gottlieb is known as someone who cares about the future of the state, and tried his best as transportation secretary, serving six years (from January 2011 until December 2016) until resigning, probably pushed out by Walker, after Gottlieb told legislators that roads would worsen under the govenor’s approach to transportation.

By 2014, Ferral writes, Gottlieb began to realize Walker “was moving away from a goal he thought they shared: fixing the state’s transportation funding problem and its deteriorating roads.”

Gottlieb had served on a high-profile transportation commission championed by Walker, and stacked with eight Republicans along with two Democratic members, which released a 176-page report in 2013 which affirmed  “what at least two other commissions led by both Republicans and Democrats over the last decade had found: Wisconsin’s highway system and local roads were rapidly deteriorating and there was not enough money to fix or maintain them,” Ferral writes.

The commission concluded that in order to maintain a “safe and efficient system,” the state should spend $479.5 million more annually over the next ten years. Without this spending, the commission predicted that the percentage of state highways “that would fall into poor or worse condition would more than double, from 20 percent in 2013 to 42 percent in 2023,” Ferral writes.

But when Gottlieb submitted a transportation budget which incorporated the commission’s call for more funding, “it took the governor less than 48 hours to reject that budget,” Gottlieb told the newspaper.

For the 2016 budget, Walker didn’t even give Gottlieb an opening to present a realistic budget. The governor released a public letter to his own department head instructing Gottlieb to “Develop a budget request with specific priorities” and avoid “spending on mega projects.”

After the DOT leader stepped down, Walker replaced Gottlieb and his deputies with Dave Ross, the governor’s safety and professional services secretary and two deputies from the Public Service Commission.

The three “had a combined total of zero days experience in transportation,” Gottlieb tells the Cap Times. “Try to find any time in the past when that has been true. It is a very a complex agency and to install a set of top leaders who have no experience in that industry I think was a mistake.”

Walker is now left with a divided party on transportation. Senate Majority Leader Scott Fitzgerald and Assembly Speaker Robin Vos have both differed vociferously with the governor, calling for greater transportation funding. And he is badly exposed on an issue he campaigned on in 2010, when he called for more transportation funding and lambasted his predecessor, Democratic Gov. Jim Doyle.

To combat criticism on this issue, Walker has offered questionable numbers, claiming he spent billions more than Doyle on transportation. In fact, in real un-inflated dollars, Walker has actually spent less than Doyle, for whom transportation was a low priority. As Ferral notes, the Legislative Fiscal Bureau has found that total highway funding under Walker declined from $3.11 billion in the 2013-15 budget to $2.79 billion in 2015-17 to $2.54 billion in 2017-19, and funding for the highway improvement program is down 8.8 percent from the last two-year budget.

In what looks like an attempt to reduce transparency about this trend, new DOT leader Dave Ross has provided less data. “The agency has not updated a key spending report, ‘Transportation Budget Trends,’ from its last two budgets. The reports are posted on DOT’s website and have been produced for decades,” Ferral reports.

Walker and his loyalists have also tried to sully Gottlieb, as Urban Milwaukee Contrarian columnist George Mitchell noted in a piece for Right Wisconsin entitled “The Political Lynching Of Mark Gottlieb.” Mitchell charged that “Legislators who should know better joined Gottlieb’s successor in piling on. They portrayed WIDOT as a mismanaged agency during Gottlieb’s six-year tenure as Governor Walker’s transportation boss. As he surely OK’d the comments of Gottlieb’s successor, Dave Ross, the Governor himself was complicit in the attack.”

The conservative MacIver Institute joined in with a report claiming there were inefficiencies at DOT under Gottlieb, which he easily refuted with a point-by-point rebuttal.

Meantime, Wisconsin is left with a system of roads and highways ranked as 49th worst in the nation. The system would be even worse if not for lavish borrowing: the transportation fund’s debt has risen 87 percent under Walker, ballooning by $3 billion. According to the Fiscal Bureau, 22.3 percent of every Transportation Fund dollar will go toward debt retirement by 2019.

What’s astounding about this horrific decline in the state’s transportation system is that Walker is a Republican, a party that has long stood for strong transportation. What explains his stand on this?

For Walker politics always comes before policy. And a mega-project like finishing the rebuild and expansion of I-94 in Milwaukee, even if it is the state’s most important transportation corridor, doesn’t go over well with outstate voters Walker needs. In a 2016 listening session in Ashland, Walker played to the outstate antipathy to Wisconsin’s biggest city, promising not a dollar for metro Milwaukee freeways. “We are not spending another penny down there for the next several years,” Walker said, according to a December 2016 story in the Ashland Daily Press.

Then there are Walker’s presidential ambitions. He still hopes to run again, most likely in 2024 (assuming he is reelected governor in 2018), and he signed the Grover Norquist pledge not to raise taxes and has repeatedly emphasized his unwillingness to raise the gas tax or any other tax to pay for transportation.

Walker, of course, also turned down the federal expansion of Medicaid, so he could run in the Republican presidential primary as a stalwart opponent of Obamacare. This has already cost state taxpayers $700 million and that could rise to $1,3 billion by the end of 2020, money Walker might have spent on transportation.

Whatever the reasons for it, Walker may go down as the state’s most anti-transportation governor in modern history.