The Magic of Mozart

By Marguerite Helmers - May 4th, 2018 02:22 pm
Get a daily rundown of the top stories on Urban Milwaukee 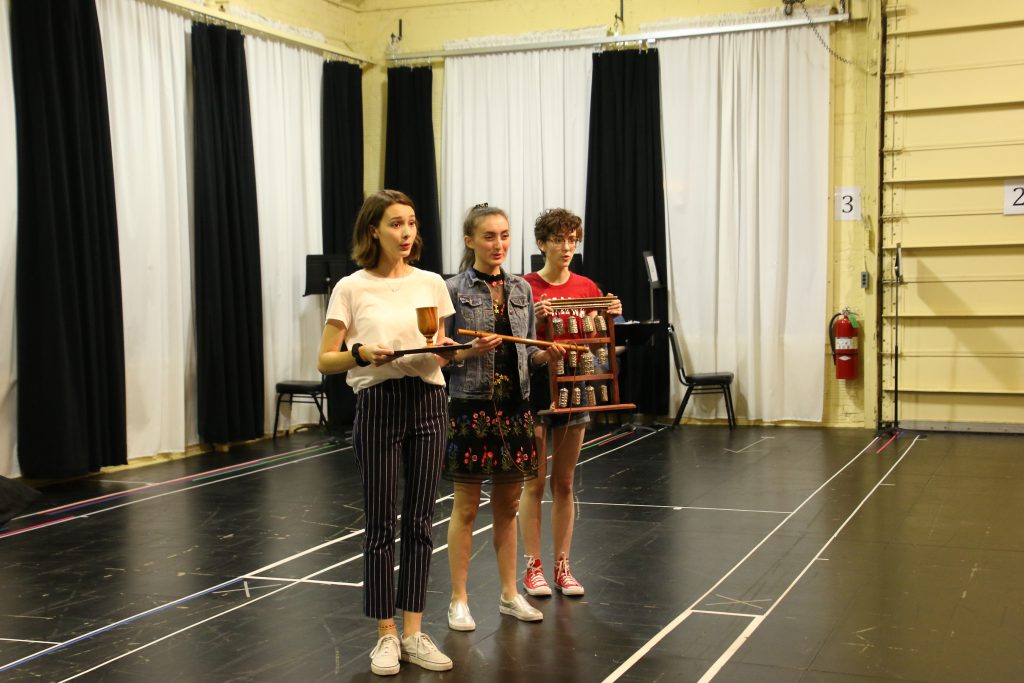 The Three Spirits. Photo from the Florentine Opera.

In the classic quest narrative, a hero embarks on a journey with a companion, battles evil, and either rescues a princess from danger or saves the world from annihilation.

Think Don Quixote and Sancho Panza, Frodo and Sam, the plot of every American road movie since The Wizard of Oz and video games like The Legend of Zelda: Ocarina of Time. In Wolfgang Amadeus Mozart’s The Magic Flute, Prince Tamino and the rustic Papageno are tempted with a lofty reward, “He who travels these laborious paths will be purified by fire, water, air and earth.” Tamino is given a magic flute to protect him on his quest.

Milwaukee Florentine Opera will perform The Magic Flute on May 11 and May 13. This is a reprise of the 2009 production, performed in English with a translation by Andrew Porter. Joseph Rescigno conducts the Milwaukee Symphony Orchestra.

It’s not such a stretch to compare The Magic Flute to popular narratives. Composed during an incredibly productive period between April and September 1791 and premiered only months before Mozart’s death, The Magic Flute was conceived of as musical theatre, or singspiel (song speech), in the popular theater tradition of 18th century Vienna.

The Magic Flute is perhaps Mozart’s best-loved opera. According to the musicologist Peter Branscombe, even in its day writers claimed that it had “received such excellent and general approval that it was performed a hundred times within a space of twelve months.” The applause it received was said to be “without parallel.”

“It’s a great way to introduce people to opera,” says Leurquin, a student at Kettle Moraine Lutheran High School who debuts as one of three spirits who guide the characters through their trials.

Will Liverman, the baritone performing the role of Papageno, adds, “It’s a complex show. The story has a twist. The people who you think are good in the beginning turn out not to be so good.”

The story opens with the Tamino (tenor Noah Stewart) battling a serpent. Overcome, he faints (a common 18th century literary device to show his noble and sensitive character). He is saved by three ladies working for a dark queen. In the first of two breath-taking arias, the queen tasks Tamino to rescue her daughter Pamina (soprano Jamie-Rose Guarrine) from a castle, where she is being held by Sarastro (bass-baritone Jeff Beruan).

Soprano Laura Pisani, who makes her US and Florentine debuts as the Queen of the Night says she thinks of her character as “a force of nature — like she’s not human. Because there are so many things about balance in this opera. There are good people, bad people, light, darkness. She wants to recover the power that she had. That’s the evil part. She’s only interested in power.”

The role of the queen involves the famous second act aria in which, out of rage and jealousy, she gives Pamina a dagger and commands her to kill Sarastro, “Forever disowned, forever abandoned, forever destroyed may all ties of nature be, unless Sarastro dies at your hands!”

Pisani has sung the role before in Buenos Aires. The Queen of the Night’s arias were her introduction to opera.

“I heard The Magic Flute when I was 17,” she said in a recent interview at the Wayne & Kristine Lueders Florentine Opera Center. “I was singing in a choir and I discovered that I had those high notes. A friend told me to listen to the Queen of the Night. I started trying the arias, playing. I wasn’t serious about it at first.”

One of the most beloved characters in opera is Papageno, a lonely bird catcher who longs for a wife and a big family. He accompanies Tamino on his quest to rescue Pamina and as a reward discovers his soulmate, Papagena. Papageno is based on a stock character in German comedy, a country buffoon known as a “Hanswurst” character.

Liverman thinks it’s possible to look beyond the slapstick. “Papageno is the comic relief, but he’s really going through serious things. It gets to the point where he’s going to kill himself at the end when he thinks that all hope is lost. It’s challenging because the music is so light and in major keys at times and you have to fight the urge to be really ‘charactery’ and not play it too funny.”

Papageno and Tamino are accompanied on their journey by three spirits, “young, beautiful, gracious, and wise.” The roles will be performed by three high-school aged singers who have taken part in the Florentine Opera’s Young Singing Actor Intensive, a week-long summer music intensive.

Rachel Mauney, a student at West Bend East High School, points to The Magic Flute as her introduction to opera. “In 2009 the Florentine production came to my elementary school when I was in third grade. I was enamored with it. I couldn’t stop talking about it!”

The spirits unite Prince Tamino with Princess Pamina and intervene when Papageno attempts to hang himself, calling, “Stop, Papageno, and be wise!”

Sarah Leurquin is happy that, as one of the three spirits, she has some power over the outcome of the story. “I love being on stage with all of the others and playing off of them–and being in charge of them.”

The trio of singers has found working with the professionals to be inspiring.

“It’s a great learning experience,” says Madeleine Keane, a student at Divine Savior Holy Angels High School. “Even when I’m just sitting and watching at rehearsals, I feel like I’m being taught.” She adds, “Mozart is very unique and special. The opera is complicated and beautiful.”

Thinking about the opera’s finale when the queen and her minions of darkness are vanquished and all the characters gather on stage for a final chorus, Mauney says, “It’s amazing being up there with everyone. Here’s a room with amazingly talented people—and also I’m here.”