Is California the Future?

The data about California may have political and economic lessons for Wisconsin. 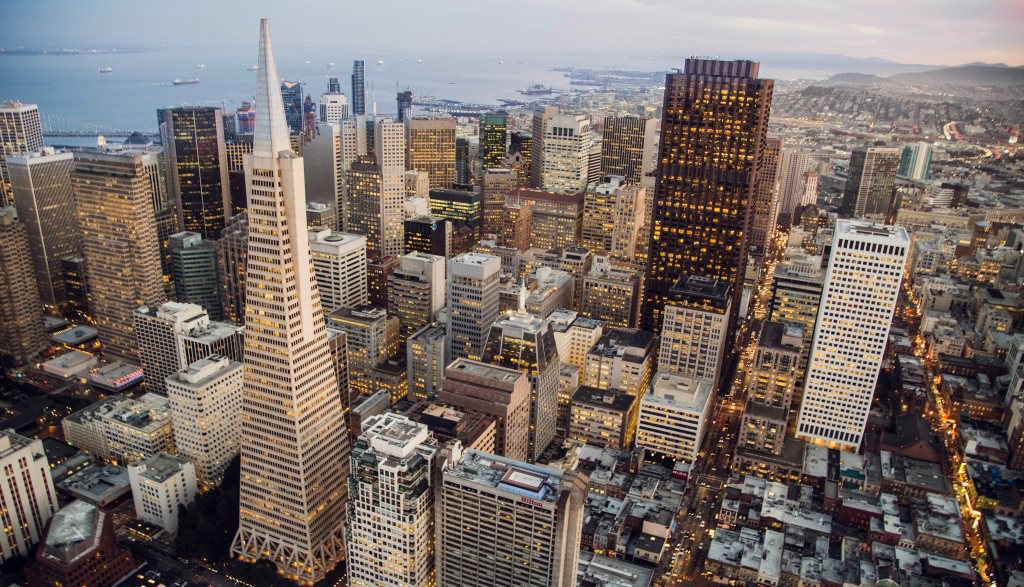 In 2002, John Judis and Ruy Teixeira wrote a book entitled The Emerging Democratic Majority, in which they argued that Democrats would enjoy an increasing demographic advantage in American elections. This was largely based on the observation that minority groups were growing at a much higher rate than white Americans. The Census Bureau projects that by 2040, America will become a “majority minority” country, in which white Americans will be a minority.

For a time, elections seemed to bear out this thesis, including the 2006 wave election in which Democrats took control of both the US Senate and the House, followed by Barack Obama’s election as president. Later, however, elections have not followed its expectations, with the Republican “wave” off-year elections in 2010 and 2014 and Donald Trump’s election in 2016.

Judis now argues that he and Teixeira were wrong, while Teixeira continues to argue that the growth of minorities will ultimately shift the political balance towards the Democrats.

However the theory is borne out in future elections, Judis and Teixeira’s thesis seems to have had a profound effect on the right and the left. For the left, it encouraged Democrats to ignore the concerns of the white working class, perhaps contributing to Hillary Clinton’s loss in Wisconsin, by promoting the notion that it was becoming increasingly irrelevant.

It also contributed to a sense of panic, both on the right and among some members of the white working class. Here is the opening paragraph of a pro-Trump article published anonymously during the campaign:

2016 is the Flight 93 election: charge the cockpit or you die. You may die anyway. You—or the leader of your party—may make it into the cockpit and not know how to fly or land the plane. There are no guarantees.

The author, later identified as Michel Anton who went on to become a national security adviser in the Trump administration, went on to argue that:

… the ceaseless importation of Third World foreigners with no tradition of, taste for, or experience in liberty means that the electorate grows more left, more Democratic, less Republican, less republican, and less traditionally American with every cycle.

Perhaps this sense that America was becoming less American contributed both to the election of Trump and the Republican willingness to make states like Wisconsin less democratic to avert the looming disaster. If the alternative to radical gerrymandering and disenfranchising voters is to allow democracy to slip away, such measures may be justified, in this thinking.

Judis and other critics of the prediction that demographic change guaranteed success to Democrats pointed to several major flaws. One is that it assumes that children of people who self-identify today as Hispanic or Asian will continue to claim those identities. Another is the assumption that the political preferences of demographic groups are fixed and don’t change over time. Finally, it assumes that today’s political preferences of young people will remain fixed over time. Some of us remember a time when it was widely expected the baby boom generation would be far more liberal than their parents.

The emerging Democratic majority thesis has been revived and revised in the so-called California essays, written by Peter Leyden with Ruy Teixeira. Leyden argues that “California Is the Future of American Politics.” He goes on to assert that “Trump is the last gasp of the conservative era and will bring down Republican rule. What’s coming next is in California right now.”

Politically, California has become a one-party state and Leyden describes the process in some detail, particularly how California Republican politicians systematically antagonized the Hispanic community. Leyden goes on to predict that the rest of the nation is 15 years behind in following the same path. I believe there are compelling reasons to be skeptical of Leyden’s confidence.

Even if one assumes that the present political preferences by demographic groups will remain fixed over time, states like Wisconsin are way down on the list of those shifting to majority minority status. If any of the many Democratic candidates for Wisconsin governor are depending on this shift, they are living in a fantasy world. For Democrats to be viable in this (and many other states), they will need to win the votes—and address the issues–of a large number of working class white voters.

In addition to arguing that the rest of the nation is poised to follow in California’s footsteps, Leyden argues that this is a good thing. Most conservatives would, on the other hand, likely regard that as a terrible outcome. Let’s take a look at the record.

Start with job growth. If one believes that increasing the number of jobs is the most important role a state can play—as Wisconsin’s Scott Walker appears to believe—California is a clear success story. The chart below shows the percentage of job growth since January 2011 in Wisconsin, the US, California, and San Francisco. Both Walker and California’s Jerry Brown took office in 2011. 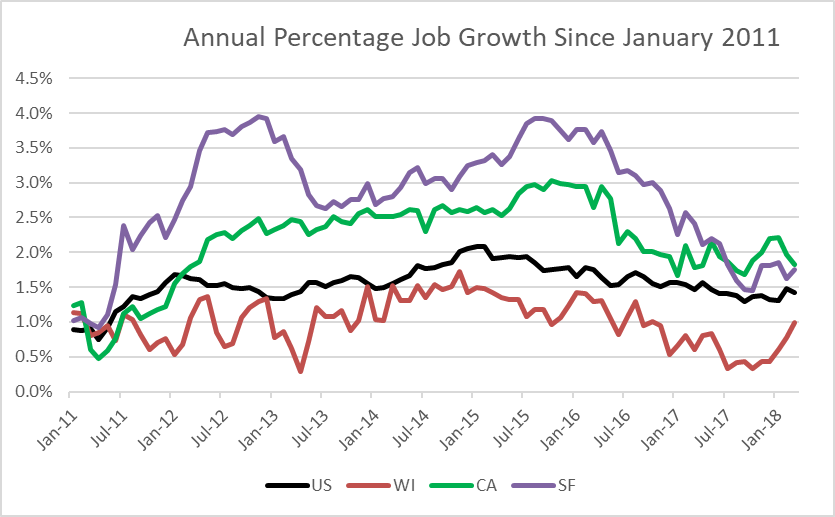 By this yardstick, at least, Brown is a far more successful governor than Walker. And as Leyden describes in some detail, California job growth was not promoted by sacrificing environmental protection. To the contrary, the state has taken the lead in countering global warming.

California also shows that conventional economic success has costs. As the next graph shows, compared to Milwaukee, the housing cost in California cities is astronomical. Part of the explanation is geography. Squeezed between the ocean and the mountains, California’s cities can’t spread out, like cities such as Houston (famous for its lack of zoning). San Francisco is almost completely surrounded by water. There is nowhere to go but up and tall buildings have entrenched political opposition. As a result of all these factors, housing units in San Francisco have grown much less than job numbers, resulting in a price squeeze. 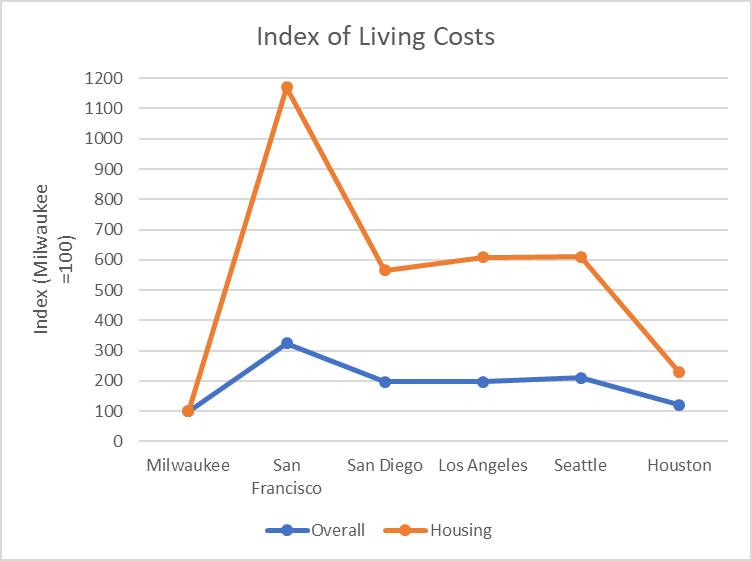 Viewed just from a market economy aspect, rising prices can be regarded as a sign of success. Demand for a product—houses in California—is running way ahead of supply. Good for those who already own such houses, but not for those contemplating moving to California.

Another common criticism of California focuses on its educational outcomes. The next two graphs show scores for 4th grade reading on the National Assessment of Educational Progress (NAEP) for two ethnic groups (results for math and 8th grade generally show the same patterns) and for three states and the US.

Massachusetts is widely regarded as showing what can be accomplished when all the major players get together to raise student achievement. Wisconsin shows what happens when a state starts out ahead but lets others pass it by.

California NAEP results earned their poor reputation in the past. More recently, however, it has been closing the gap with Wisconsin and the nation. 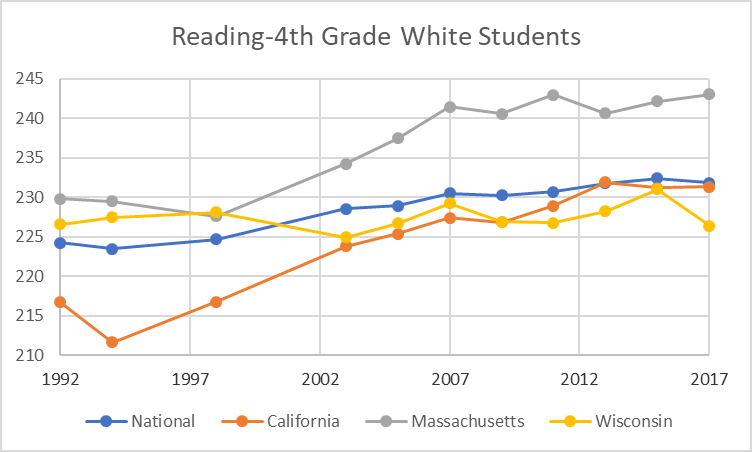 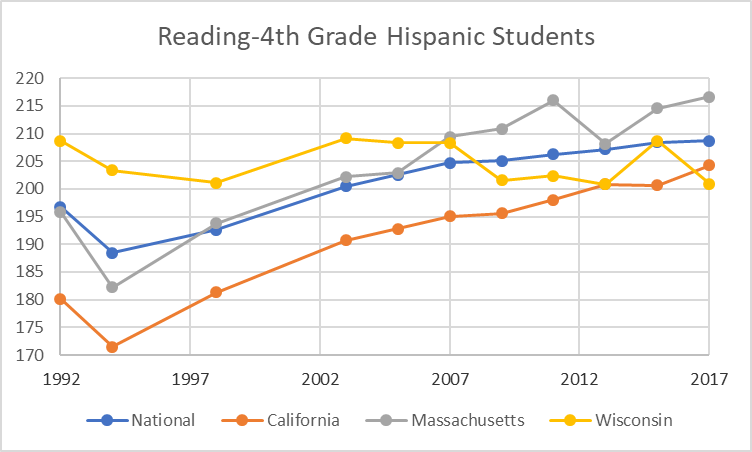 What are the lessons for Wisconsin of the California story? The first is political: Democrats should not expect demographic changes to rescue them or allow them to say goodbye to white working class voters.

The second is economic: increasingly, prosperity will flow to areas where people want to live. Therefore, to allow environmental degradation or to subsidize private industry by diverting resources from public services is likely to be counter-productive in the long run.

9 thoughts on “Data Wonk: Is California the Future?”