Menu and restaurant are big and upscale, but results at Third Ward place were uneven. 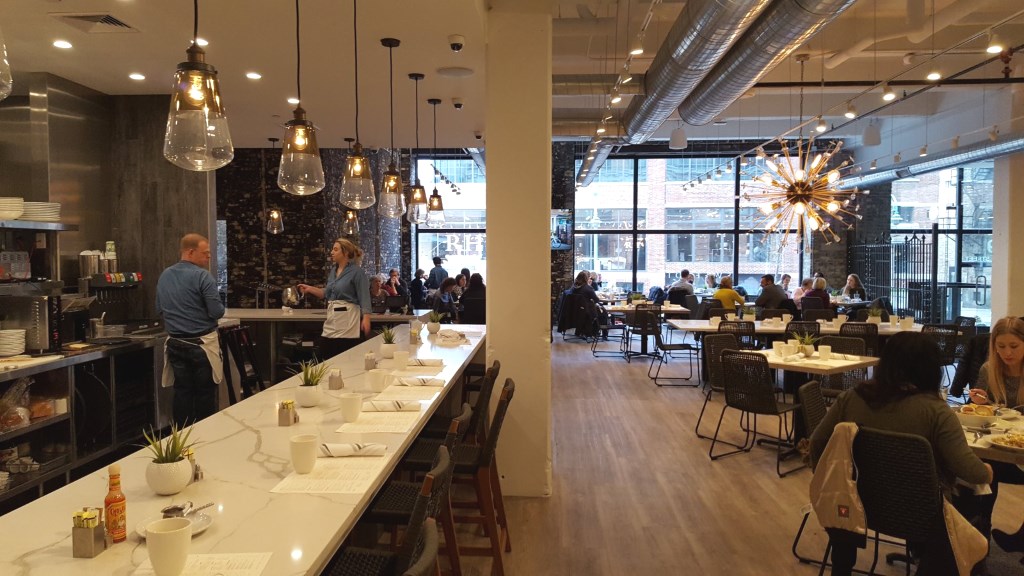 Because I heard glowing reports about a new restaurant in the Third Ward, high expectations preceded my visits to Sweet Diner, the spiffy new pseudo diner on Chicago Street. This upscale restaurant, with no resemblance to an old fashioned locally owner diner other than its menu, has a long list of brunch/lunch dishes. Many have received do overs, for example the Chilaquiles, the Monte Cristo and the Southern Benedict.

Spiky gold-colored chandeliers set an upscale tone, while exposed weathered Cream City brick tones down the glitz in this light-filled space with windows that look toward Chicago Street. A long counter faces an open kitchen giving diners an opportunity to watch the crew tossing omelettes and assembling Skillet Bowls. How appropriate that Sweet Diner is located on Chicago since its three owners George Prassis, George Karkalis, and Yiannis Konstantinou are Chicagoans.

I’ll start with Bowls. You have four choices including the carnivore’s Meatatarian, a mix of ham, sausage, chicken sausage, Canadian bacon, and bacon, all topped with cheddar cheese. Or, you can consider Ham Hash, topped with gruyere cheese, the Veg head, a bowl of veggies with shaved cheese, or Chilaquiles.

I found the Chilaquiles nothing like the Mexican dish. Instead, it was a bowl of mainly chorizo surrounded by corn, pico de gallo, chopped red onion, potato, melted cheddar, and hidden in the center, scrambled eggs. It came topped with slivers of corn tortillas, not crispy, chewy. A little residue of grease from the chorizo had settled in the bottom of the bowl. Our server warned us about the spicy chorizo, but we found it quite mild. Overall, this dish needed something to bring it to life, maybe a few squirts of Sriracha.

From Eggs Benedict, Classic, Florentine, and Mediterranean, the Southern Chive Biscuits, topped with sausage patties, poached eggs, and sausage gravy sounded the most interesting. In addition to the biscuits in the dish, it came with a side of two more biscuits which had been grilled and buttered. The gravy, flavored with cumin, was delicious, as were the biscuits, though we couldn’t taste the chive. This Benedict could have been even better with more sausage gravy in place of the two sausage patties under the poached eggs, but like every dish we sampled, the meat, in this case sausage, was the biggest player. The gravy was by far the star.

Meat lovers will appreciate the Pound of Ham, “Just because you can’t get enough of this magical animal,” listed as one of the Sweet Diner Classics. According to our server, no one has yet polished off this one. Most wisely opt to share. Among other Classics are Famous Ham Off the Bone served with eggs, Marinated Skirt Steak, Fiesta Chorizo and Scramble Egg Tacos, and with a nod to vegetarians, Avocado Toast.

We found the Scramble Egg Tacos crisp, but the bland chorizo disappointing. The chef put the add-on avocado at the bottom of the tacos, maybe because it tasted as if it was at the end of its life. With the addition of red salsa and sour cream, this egg taco scramble, four tacos, made a filling, if not memorable lunch.

When you think of a typical brunch, omelettes come to mind, and at Sweet Diner you have four to choose from, or you can build your own, using one protein, two veggies, and one cheese. If you want to stuff more into your creation, there’s a small additional charge. On the omelette menu, you’ll also find the Wisconsin with sausage and cheese curds, the Veggie, Guiltless with egg whites, and Denver, green pepper, onion, and cheddar. We found the Veggie with zucchini, onion, tomato, broccoli, and mushrooms, a healthy choice.

Moving on to Breakfast Sandwiches, eight in all, there’s grilled chicken, grilled cheese, a couple breakfast burgers, a BLT with avocado, a Croque Madam, and the Monte Cristo.

The latter was an unfortunate choice. It was served on grilled, slightly sweet French toast which needed maple syrup to give it some flavor. The ham in the sandwich had an off taste; the grilled chicken was dry; the jam and the gruyere cheese barely present; the sandwich was served cold; and the accompanying Breakfast Potatoes had spent too much time under the heat lamp.

On this extensive menu you will also find the usual Pancakes, Waffles, and French Toast. The Cinnamon Apple Pie Glaze Waffle sounded especially enticing with its sautéed apples and caramel swirl whipped cream.

Overall I was underwhelmed by this big new addition to the city’s breakfast scene. But it’s a popular addition to the always changing, ever expanding restaurant roster in the Third Ward. And whatever dish you’re hankering to have for breakfast, they most likely serve it at Sweet Diner. 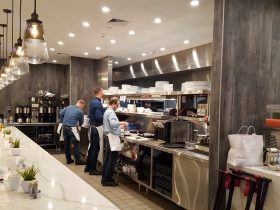 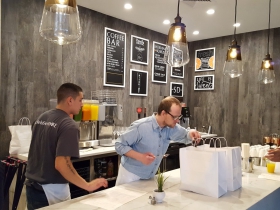 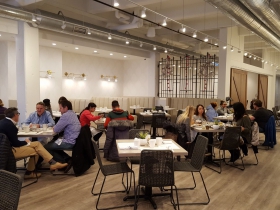 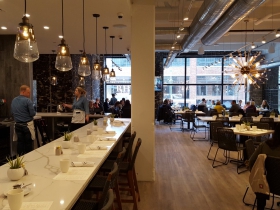 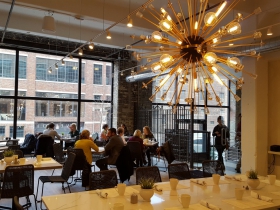 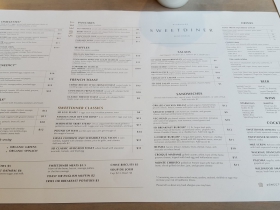 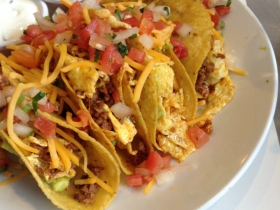 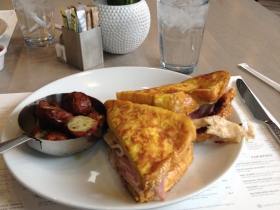 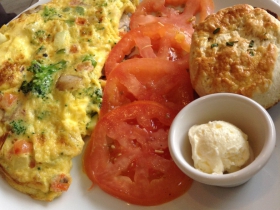 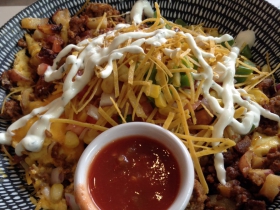 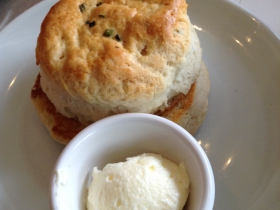 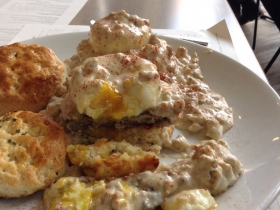