Why Is City’s Student Achievement So Low?

A recent Washington Post article by Arne Duncan argued against the view that education reform hasn’t worked very well: “while today’s kids bring more learning challenges, they perform as much as 2½ grades higher than their counterparts from half a century ago.” Duncan, Education Secretary during much of the Obama administration, is hardly a neutral observer, but the evidence backs him. Overall national scores on the National Assessment of Educational Progress (NAEP) on 4th and 8th grade reading and math exams have risen substantially since 1971.

Unfortunately, this improvement has largely skipped Wisconsin. An analysis from the Wisconsin Reading Coalition finds that:

All Wisconsin racial, economic status, and disability status sub-groups perform below the national average for that sub-group

The coalition finds that Wisconsin has dropped from third place on the 4th grade NAEP exam in 1994 to 34th place on the recently released 2017 results. This decline was entirely due to the improvements in other states’ results. I may have more to say about the state in future columns, but here will concentrate on Milwaukee versus Chicago, whose results show that an urban school district can see improvements in results.

A comparison of Chicago public school students’ standardized test scores in 2009-2014 with those of public students across the U.S. reveals two striking patterns. First, Chicago students’ scores improved dramatically more, on average, between third and eighth grade than those of the average student in the U.S. … Second, at each grade level in grades three through eight, Chicago students’ scores improved more from 2009 to 2014 than did the average scores of all students in the U.S.

The approach taken by the Stanford group was to compare the scores on the 8th grade exams to the scores for the same cohort of students when they took the exam four years earlier (five years earlier in the case of the Illinois exam).

The Chicago cohort continues to follow the pattern found by the Stanford study, improving more than the average of all US students or those in large cities. By contrast, the average Milwaukee student started behind all students nationwide and remained behind. 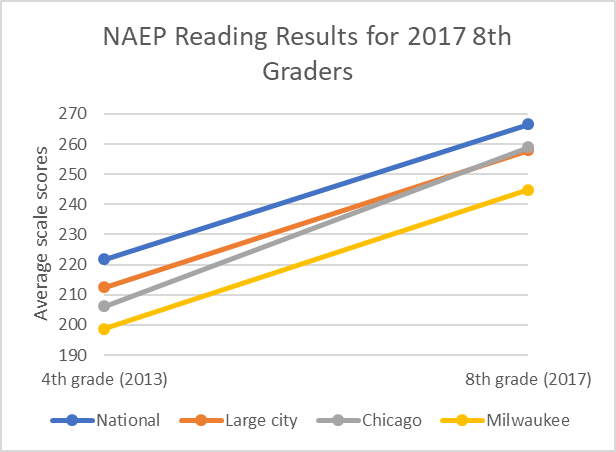 The same pattern is found when the results are broken out by ethnic group. As shown below, Chicago’s black students advanced more than their peers nationally and in other cities. By contrast, Milwaukee’s gap remained essentially unchanged. (The pattern for white and Hispanic students was much the same.) 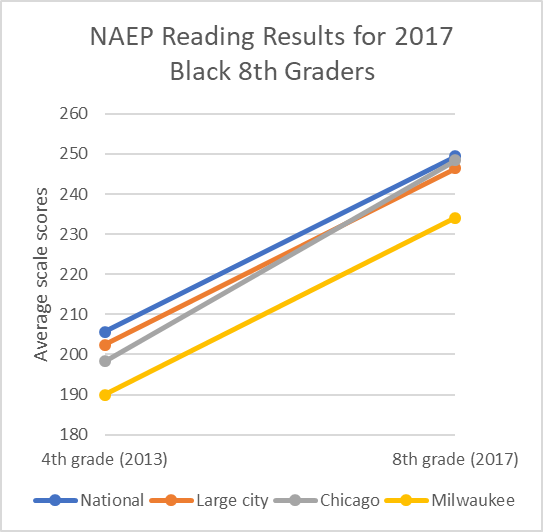 On the math exam, Chicago students gained ground while Milwaukee students lost ground, as shown below: 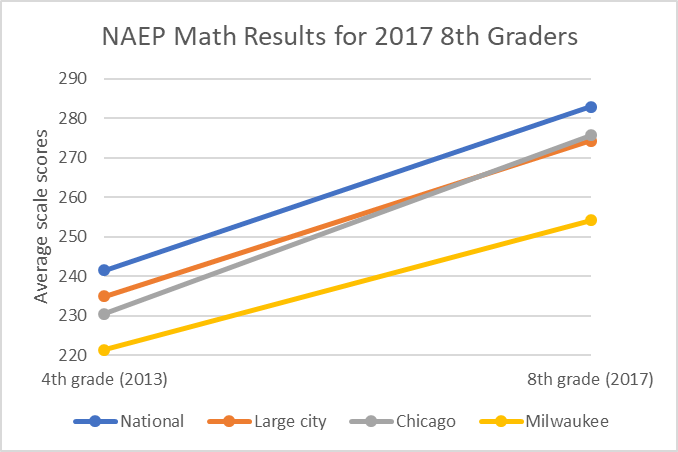 While this effect was repeated when broken out by ethnic group, the gap between Milwaukee black students and those elsewhere was most dramatic. 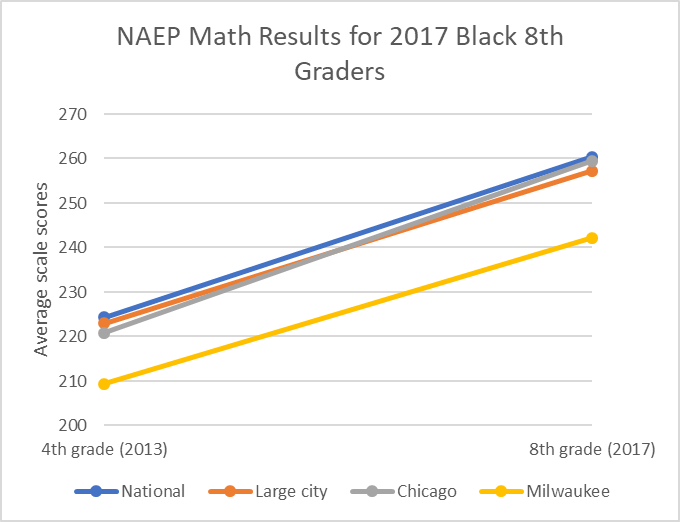 Looking at Hispanic students, Chicago’s advanced more compared to those elsewhere while Milwaukee’s fell behind. 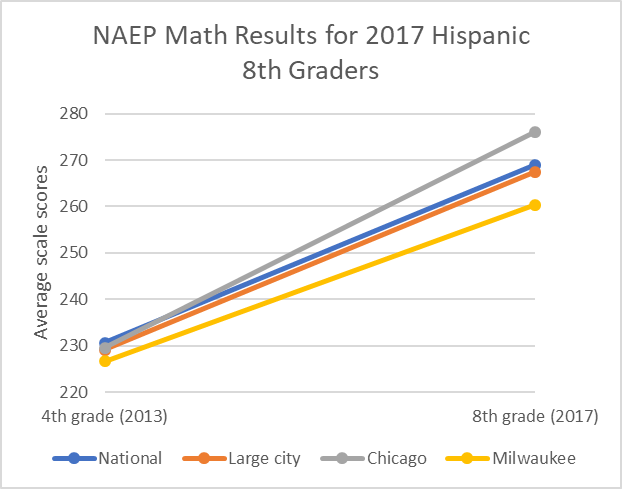 The recently-released 2017 NAEP results are consistent with the Stanford study’s conclusion that students in Chicago advance more than students elsewhere. Most disturbingly, they also point to the need to search out the causes for Milwaukee’s gap.

Various reasons have been advanced to explain why so many Milwaukee students have trouble with their education. These include the trauma that students experience with neighborhood violence, the effect of lead poisoning, family instability and evictions and the loss of manufacturing jobs, pessimism from growing up in a stressed-out environment and drug dealing.

However, these factors don’t go very far in explaining why Chicago schools outperform Milwaukee and other American cities. The factors that purport to explain Milwaukee’s lagging performance, from lead poisoning from old paint to neighborhood violence would be expected to have at least as strong an effect on Chicago. What is different about Milwaukee? The biggest difference is leadership.

A headline, Milwaukee School Boss Walks Away, could have been written today. Instead, it is from the Christian Science Monitor in 1991, reporting the decision by then-MPS superintendent Robert Peterkin to quit his job. In the thirty years since 1988 when Peterkin was hired, MPS has had 10 superintendents: Peterkin, Hawthorne Faison (interim), Howard Fuller, Robert Jasna, Barbara Horton (interim), Alan Brown, Spence Korte, William Andrekopoulos, Gregory Thornton, and Darienne Driver, who recently announced that she was leaving.

In contrast to MPS’ leadership churn, both the cities of Milwaukee and Chicago are notable for leadership stability. In Milwaukee, John Norquist took office in 1988 and left at the end of 2003, to be followed (after a few months with Acting Mayor Marvin Pratt), by Tom Barrett, who has now served 14 years.

Like Milwaukee, Chicago has had two elected mayors: Richard Daley between 1989 and 2011, followed by Rahm Emanuel. Unlike Milwaukee, the Chicago school superintendent reports to the mayor. Could this help account for the difference in outcomes?

One possible factor is a churn in policies with the turnover in superintendents and board membership. Incoming superintendents announce a fresh set of policies but leave before the policies can bear fruit. As a result, the district never learns what works and what does not. Was the policy dropped because it didn’t work or because it was viewed as someone else’s baby? Who knows?

A second possible mechanism is that mayoral control offers some insulation from political pressure against changes that may threaten the economic and political interests of various pressure groups. It is striking to me how much energy is expended in Milwaukee trying to prevent charter schools from expanding.

Whatever the reason behind Chicago’s better results in achievement, it is worth further exploration.

12 thoughts on “Data Wonk: Why Is City’s Student Achievement So Low?”