Will Foxconn Employ Any Milwaukeeans?

Despite nearly $4.1 billion subsidy, company only has goals, not mandates for hiring. 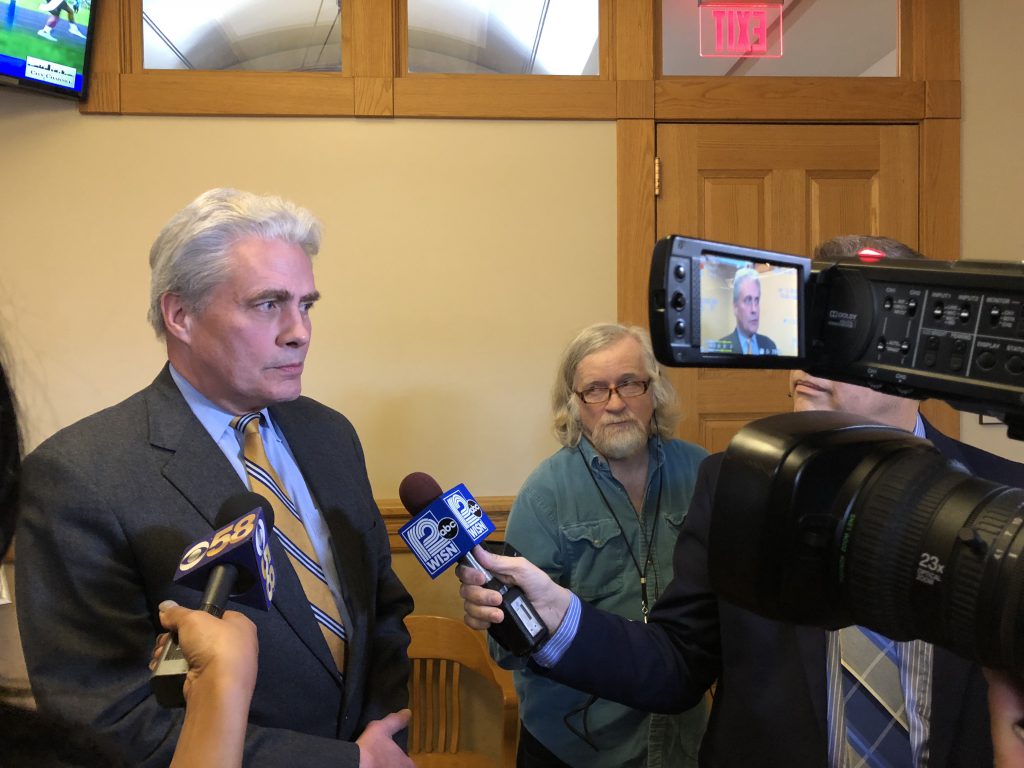 The Milwaukee Common Council is attempting to engage electronics manufacturer Foxconn and state officials to create a pipeline for Milwaukee residents to get jobs at the proposed plant in southern Racine County.

The $10 billion Foxconn project promises to create 10,000 construction jobs and 13,000 permanent jobs. Conversely, while the state’s unemployment rate is at 2.9 percent, nine out of 15 aldermanic districts in Milwaukee have employment rates in excess of 10 percent.

Many of those unemployed Milwaukeeans are minorities. Or as Employ Milwaukee’s Willie Wade, a former alderman, puts it: “2.9 percent [unemployment] means that every white person in the state has a job.”

On the construction side of the project, general contractors Gilbane Building Co. and M-W Group, in partnership with Foxconn, have created hiring goals and are holding 14 meetings across the state to get people involved in the project.

Referring to Gilbane, Matt Maroney, the state’s Director of Strategic Economic Initiatives, said: “we want to mimic some of the things they did with the Northwestern Mutual building.”

Will such a thing happen with the Foxconn project?

“Why is that percentage so low, especially given that you’re combining the three of those categories together?” asked Alderwoman Milele A. Coggs.

Jelen said “it’s based on the capacity in the region.” He stressed that contractors have yet to be hired and that Gilbane is undertaking a gap analysis right now to better identify who could participate and at what level. He said a similar analysis was key to the Northwestern Mutual effort.

Ten percent of the estimated 10,000 construction jobs would create a combined 1,000 jobs for the three target groups. But unlike Milwaukee’s mandated job program when city money is provided, the Foxconn hiring program wouldn’t guarantee those residents are from Milwaukee or even Wisconsin residents, nor would they have to be recently unemployed.

That didn’t please Ald. Robert Bauman. The alderman has held a number of hearings on connecting workers to the project with public transit, and recently commissioned a Legislative Reference Bureau report on Foxconn and the project. Bauman compared reading the report to reading Upton Sinclair‘s book “The Jungle,” which deals with turn-of-the-century worker exploitation.

Calling the presentation by Maroney “propaganda,” Bauman asked him why the state didn’t include mandatory hiring levels in their deal with the company. “Doesn’t $4 billion worth of subsidy give the state more than a little leverage to mandate certain things?” asked the alderman.

Maroney also confirmed the state has no current plans for public transportation as part of the project, and would prefer any solution to come forward from local government. “Transit, housing, those are all long-term issues. We are early,” said Maroney.

Attempting to play peacemaker in a meeting that was getting tense, Council President Ashanti Hamilton offered this thought: “in many ways the state identifying a minority hiring goal is a step further than where we are.” The city’s Residents Preference Program only looks at city residency and employment status, not whether the worker is a minority. A disparity study approved by the council in the latest city budget could change that in the future.

Hamilton’s olive branch to the state doesn’t mean the alderman is standing pat. “With the right type of partnership we could do a lot better than that,” said Hamilton about the 10 percent hiring goal.

Hamilton singled out Bernadette Karanja for praise. Karanja is the city’s Workforce Development Coordinator, a position funded by Hamilton’s office.

“There are some things that have happened here that give us a line of communication that we didn’t have before,” added Wade. He noted that with his switch from the city to Employ Milwaukee, and Karanja’s reverse move, communication lines are open that weren’t before. Chytania Brown also went from Employ Milwaukee to the state’s Department of Workforce Development, and has worked extensively on the Foxconn project.

However, shortly after the meeting, news broke that Wade’s boss, Earl Buford, would be leaving Employ Milwaukee for a job in Pittsburgh, PA.

One thing to watch for in the coming month is a presidential groundbreaking. Bauman says he has heard a mid-May groundbreaking is planned with President Donald Trump in attendance. When asked, Maroney said that would be news to him.

Trump has inserted himself into the process before. According to his former Chief of Staff Reince Priebus, Trump was shown a site in Kenosha via helicopter on a visit to the state in April 2017 and pitched Foxconn on Wisconsin in a subsequent meeting at the White House.

Foxconn’s absence created an awkward situation early in the meeting where Jelen explained that the current hiring process applies to the Foxconn project’s first phase, but that he wasn’t able to estimate how big the buildings involved would be or how many people would be employed for that phase.

11 thoughts on “Eyes on Milwaukee: Will Foxconn Employ Any Milwaukeeans?”