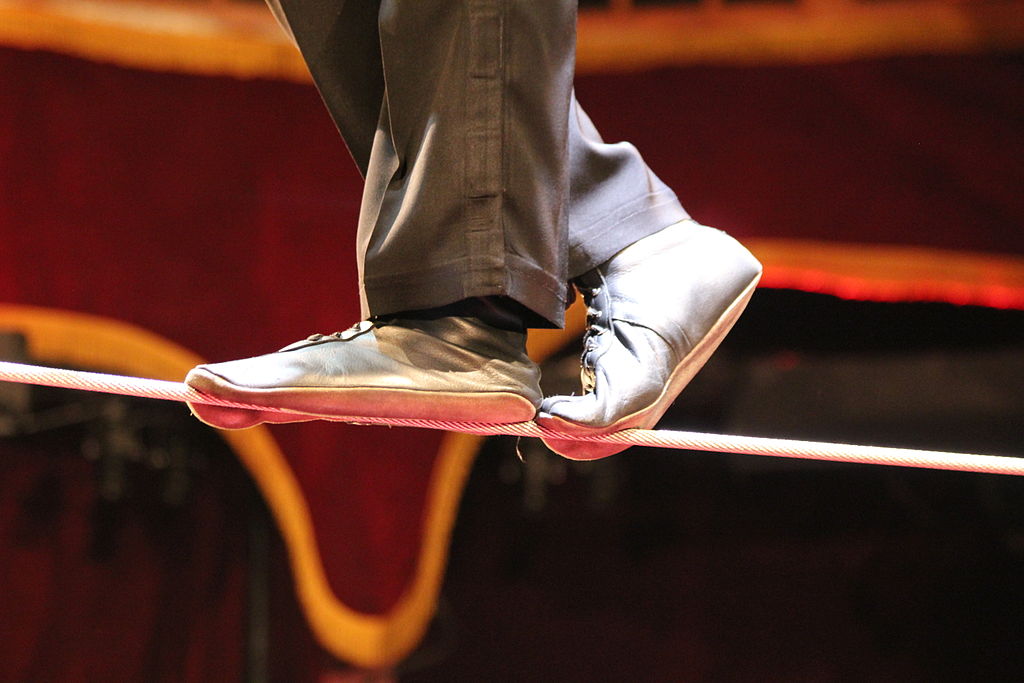 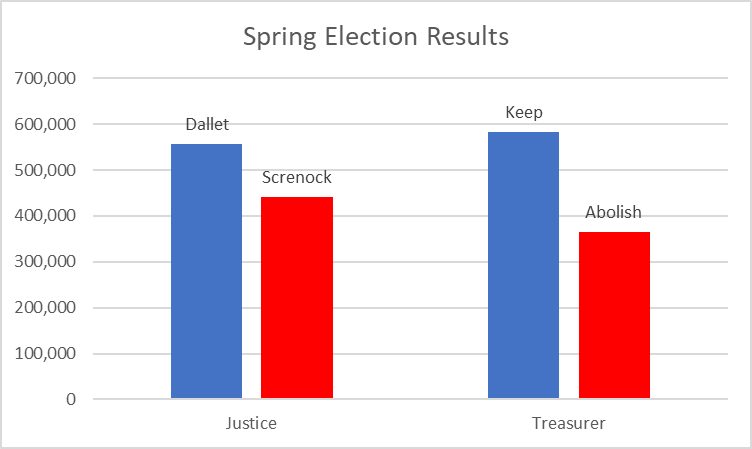 The treasurer’s margin of victory is almost double that of Dallet’s (22.9 margin to 11.6 margin). This means a substantial number of Screnock supporters must have broken with the Republican Party and voted to keep the treasurer.

Although both votes were nominally nonpartisan, support for Michael Screnock mostly came from traditional Republican sources, including the party itself. Dallet’s supporters included national Democrats, including Eric Holder and Joe Biden.

By contrast, both supporters and opponents of the constitutional amendment were strikingly quiet. While the vast majority of Republican legislators, as well as Gov. Scott Walker, supported the amendment, there seems to have been little attempt to generate public support.

The opponents were almost as quiet. Save Our Fiscal Watchdog, the only committee registered to oppose the amendment, reported receiving $209.11; $200 came from former treasurer Jack Voight. This stands in sharp contrast to estimates exceeding $2.5 million spent on the race for Supreme Court. Although several prominent Democrats were on record as opposing the amendment, they did little to publicize their opposition.

Why, then, did the voters reject the amendment so emphatically? I think a statement from one of the few Republicans to oppose the amendment and an editorial supporting it throw light on the voters’ thinking.

Wisconsin Senator Chris Kapenga, quoted in the Journal Sentinel, explained his senate vote this way: “I’m concerned about pulling a constitutionally authorized office away because I like having separation of powers. I like having independence. This is a role that, if you look at a lot of other states, they use it so that you can have good independent transparency into the government, into the finances of a government.”

An editorial in the Wisconsin State Journal urged its readers to abolish the Treasurer’s office, arguing it had become both toothless and redundant. Toothless because most of its former powers had been transferred to other state agencies. Redundant because agencies such as the Legislative Fiscal and Audit Bureaus have assumed the role of giving the legislature unbiased analysis.

The answer to the first point is to look at what powers should be restored to the treasurer and other constitutional offices. Is it really good policy to place so much power in the hands of any governor?

As to the second, the fate of the former Government Accountability Board should serve as a warning. For the crime of trying to enforce Wisconsin law against coordination between candidates and independent groups, the GAB was dissolved and replaced with two much weaker agencies. Attorney General Brad Schimel continues to try to prosecute anyone associated with the GAB. The Republican legislative leadership blackballs them when they are hired by these replacement agencies.

The vote to maintain the treasurer position can be viewed as a vote for the checks and balances that help protect transparency in government. With neither the state Supreme Court nor the heavily gerrymandered legislature serving as an effective brake on the Walker administration, people are reluctant to get rid of offices that at least theoretically serve that role.

Taken together, Dallet’s election and the treasurer vote add up to a call for Wisconsin’s various agencies to exercise their independent powers. Both the Attorney General and the Supreme Court majority should take notice and stop viewing themselves as arms of the Walker administration.

The futility of this hope was suggested by a story published by the Journal Sentinel (ironically on the same day it reported the election results): it involved a lawsuit in Kewaunee County in connection with an application from a very large dairy to get even larger. After the DNR backed off on proposed conditions, neighbors and an environmental group sued and won in district court.

The question became which branch of the Wisconsin Court of Appeals—in Madison or Waukesha–should hear the state’s appeal. As he demonstrated when defending Walker’s refusal to schedule special elections, Schimel is partial to the Waukesha branch.

The Supreme Court decision by Justice Daniel Kelly, joined by the other four conservative justices, involves a state law that discourages judge-shopping. The law requires that appeals go to the district containing the county in which they were filed. However, it makes an exception if the county was “designated by the plaintiff.” Then the other party can pick the appeals district.

To suggest that is the case here, Kelly’s contortions get impressive, as he discusses whether the plaintiffs — the environmental group suing the state — had “designated” the court. He asks, “does ‘designate’ mean ‘choose’?” and concludes that it does not: “plaintiff can ‘designate’ venue even when there is only one county in which the matter may be filed. … we conclude that even when the latter statute eliminates any opportunity to choose a county, the plaintiff still designates venue …”

Kelly’s decision has all the hallmarks of someone trying way too hard to arrive at a pre-determined destination, to give Schimel and Republicans what they want, and four other justices went along with his ruling.

In response to the election results, Governor Walker tweeted: “Big government special interests flooded Wisconsin with distorted facts & misinformation. Next, they’ll target me and work to undo our bold reforms.” The size of government is not the problem, in my judgment. Rather, it is the disappearance of the boundaries between nominally independent branches of government. As a result, the units no longer act as checks on each other’s’ excesses.

Dallet’s compaign made clear she would be a check against other branches of government, rather than a “rubber stamp for Walker,” as she dubbed Screnock. And the strong vote to preserve the state treasurer office suggests voters want some checks and balances. That issue may continue to be potent in this fall’s elections.