Voices of the Open Housing Marches

By Margaret Cannon, Milwaukee Neighborhood News Service - Mar 29th, 2018 10:04 am
Get a daily rundown of the top stories on Urban Milwaukee 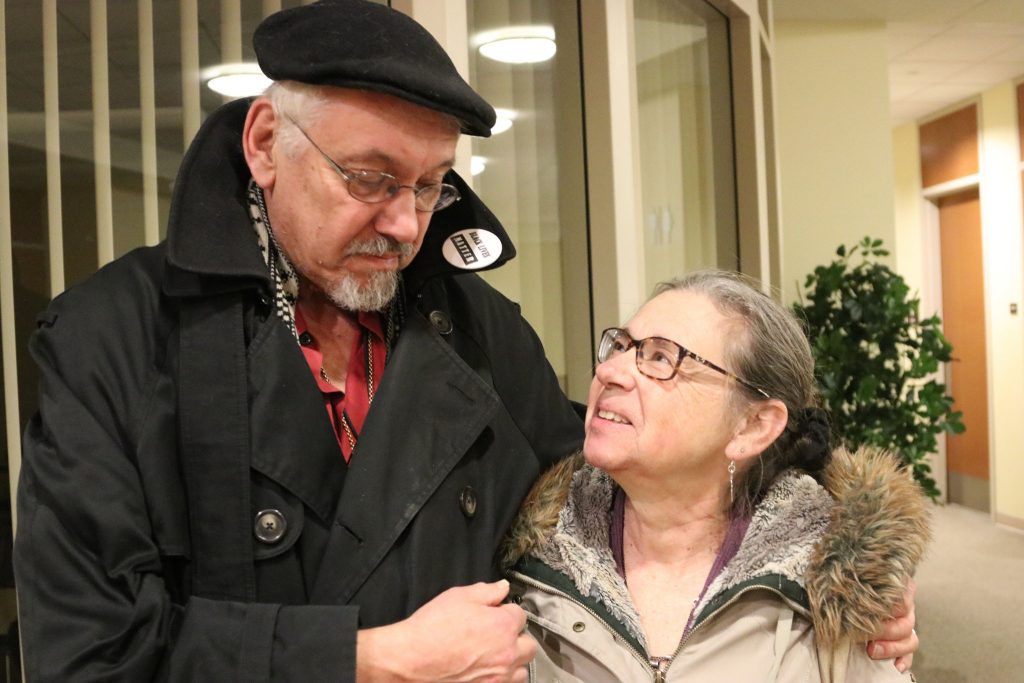 John Hagedorn and his wife, Mary Devitt, were interviewed by professional archivists about their personal stories involving the 1967-68 Milwaukee open housing marches. Photo by Margaret Cannon.

John Hagedorn was arrested twice in the summer of 1967. Hagedorn was one of hundreds of members of the NAACP Youth Council and others who marched for 200 nights in 1967-68 to protest housing segregation.

“It went to the core of my being that there was something deeply wrong,” said Hagedorn, who is white.

As a student at the University of Wisconsin-Milwaukee, Hagedorn became a member of the Young Democrats, which supported open housing and opposed the Vietnam War. He said it would have been hypocritical of him not to march.

Hagedorn said he realized the depth of prejudice in Milwaukee when he crossed the 16th Street Viaduct and walked into a crowd of angry white people, ready to attack.

His first arrest was the night after Mayor  Henry Maier banned the protestors from further marches. Hagedorn described the night as an “out of control riot.” 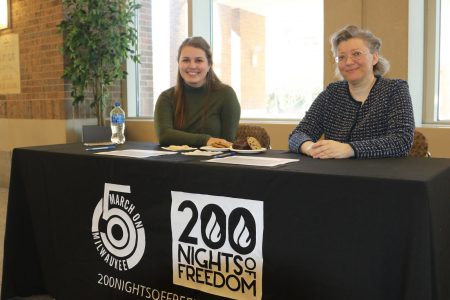 Madeline Krolczyk, a student assistant for university archives at Marquette, and Olga Schennikova, a Ph.D student at Marquette, help sign individuals up for their interviews. Photo by Margaret Cannon.

Hagedorn was released the next day, but was arrested again soon after. He said he was surrounded by six policemen and was hit on the head with a club. He also remembers seeing a young black man dragged by policemen and beaten so badly that his whole body was shaking while the two were in a paddy wagon. Hagedorn put his left arm across the young man to calm him, but was told by the police to “get your hands off that nigger,” or he would be shot.

Hagedorn said participating in the marches was a turning point for him. “It put me on a path of fighting for social justice for my whole life,” he said.

Fifty years later, wearing a “Black Lives Matter” button, Hagedorn sat with a professional archivist and recorded his story at Marquette University Raynor Memorial Library. Milwaukeeans were invited to participate in an ongoing oral history project organized by March on Milwaukee 50th, an initiative to commemorate the marches.

Kristen Leffelman, a field services representative with the Wisconsin Historical Society, said many people tend to think their own story is not significant enough to be historic.

However, nothing can compare to hearing an individual speak about his or her personal experiences, according to Leffelman. She said the history project gives people who may not have been leaders of the movement an opportunity to tell their story.

“Whenever you get a collaborative model between repositories, the result is greater than the sum of its parts,” said Amy Cooper Cary, head of special collections and university archives at Marquette.

Kevin Abbring, an archivist at the Milwaukee County History Society, said connecting historical institutions with the community through these events has exposed people to a new way to learn about Milwaukee and its past.

One of project’s goals is to bridge the gap between the experiences and people in the 1960s and today’s young political activists. The first recording event was held at the Wisconsin Black Historical Society in August, prior to the launch of “200 Nights of Freedom,” and focused on the marchers. Another event was held in November at the ACLU Youth Social Justice Forum, where more than 23 people were interviewed, most of whom were young people. Abbring said organizers hope to host one more event to record stories at the beginning of May.

Will Tchakirides, a University of Wisconsin-Milwaukee Ph.D. candidate in history, is a member of the March on Milwaukee’s oral history committee.

“I do this because I think it’s important for the community to develop its own institutional memory,” said Tchakirides. “I want to help facilitate that process and lift up voices that haven’t been heard yet regarding the March on Milwaukee.”

Hagedorn’s story will now be preserved for generations to come.

“[The marches] are a transformative event for people as well as Milwaukee,” he said. “These movements shook the city and were part of shaking the country in the ’60s.”