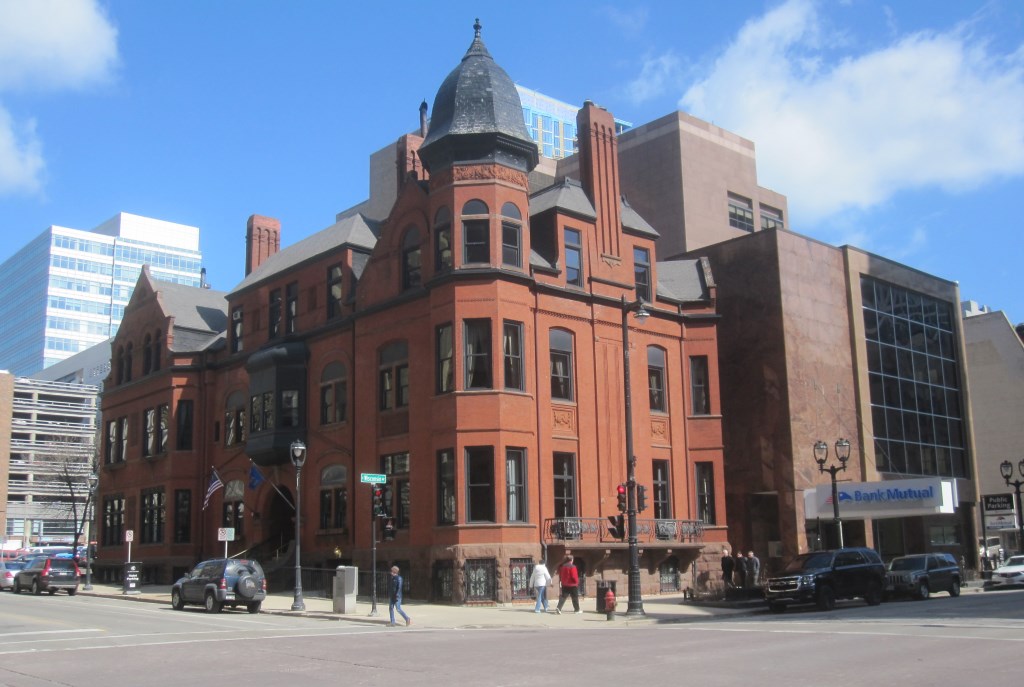 In a city of superlatively old taverns, the staid Milwaukee Club, 706 N. Jefferson St., exists in a league of its own. This private club was incorporated in 1882. Nearing its centenary, a committee was organized under the leadership of William W. Allis to commemorate that milestone with a club history to be authored by architectural historian H. Russell Zimmermann.

From the 1982 book’s introduction:

“It is one of only a handful of buildings that can claim to have served its original owner, in the same capacity, for 99 years.”

The statement rings true today, except that the place has now been in business, a true gentlemen’s club, for 134 years. (The grand opening was held June 1st, 1884). The Milwaukee Club remains under the same ownership (a non-profit corporation) and serves the same clientele, many of whom, like the late Bill Allis, are descendants of club founders. The club is housed in an 1883 building designed by Chicago architect Daniel Burnham, and soon expanded by Edward Townsend Mix, who supervised the original construction. It has been scrupulously maintained over the decades, as has the gentility and exclusivity of its membership.

The club’s first president, Alexander Mitchell, [1817-1887] whose own home is now the Wisconsin Club, would find this place virtually unaltered from its original state, right down to the cuspidor in the men’s bathroom and the art on the walls.

This is not a matter of neglect, but rather of design by an institution known as “the oldest and most exclusive club in the city,” and “a genteel old stronghold on conservatism.” Is it ever.

We’ll patch her up so she will do, but we’ll not change the old one for a new.”

A view of a floorplan from the club’s 1935 Class “B” Tavern license application shows that the bar area, located discreetly off the main lobby out of sight of casual passersby, is unaltered from the current layout of the room, with the exception of the large, round copper-topped table that seats eight. It’s moved about eight feet in the past eight decades. The “portable service bar” is right where it always has been, in the northwest corner of the panelled room. The “Application for Permit to Occupy” was dated April 16th, 1935. and asked to use “one room on the first floor” as a “Tavern.” According to the application, the space was previously a “.” The term was struck through (and the space left blank) perhaps by one of the club lawyers who knew the space had always been a tavern, even during Prohibition.

However, you could spend a lifetime in the club, with a drink in your hand all the while, and never set eyes on the bar, since drinks are brought to you by waiters. From time to time some members have quietly suggested that an actual bar with stools might be a reasonable amenity, but such talk has never passed the scrutiny of the House Committee.

As a reporter noted in a Milwaukee Journal article of August 3rd, 1941 entitled “Days of Bygone Era at Milwaukee Club are Recalled”:

“They have always opposed any suggestion to have a bar in the place. A gentleman sits down to drink.”

The reporter was Gustave Pabst, Jr., whose familiarity with the club was also familial, as he was a member and the grandson of one of the original incorporators, Capt. Fred Pabst, a frequent customer until his death in 1904.

The reminiscence focused on the upcoming retirement of club manager Eugene Trimberger. At the age of 58, Trimberger had already put 46 years of service into the club, and he remembered the horse-and-buggy days when folks like Pabst’s father would arrive in a four-in-hand, while young whippersnappers like John Burke in his tandem bicycle and Frank Abbott “in his English model” would “leave their wheels on the rack outside the club.”

One of the few changes over the decades is that the hitching post is gone and there is no longer a rack outside the club to leave one’s wheels.

Zimmermann, in his book, noted the grossest change to the building:

“At least 20 handsome stained glass windows have disappeared and some of the basement windows have been filled with the worst possible material … glass block.”

The offending glass block was replaced with stained glass and decorative ironwork in 1999, and it has made a tremendous improvement to the building.

We’ve pressed our nose against the immaculately clean windowpane long enough. Let’s head inside. The place seems busy today. Must be the funeral of a member. Can’t think of any other reason it would be so active. First stop: the men’s toilet.

The bathroom, more of a suite, has a quarry tile floor, marble walls and partitions, mahogany trim, and that other accessory so seldom seen in toilets nowadays: a stained-glass skylight. You’re on the honor system to hang your coat in the open racks, not far from where the shoe shine stand is located. There is a cute little stool that you can sit on to pull off your galoshes, or perhaps enlist somebody to do so for you. When you are done washing your hands, you dry them on soft cloth towels, depositing the used ones in the slot below the brass marker engraved, “Hand Towels.”

Once emergent, take a look at the library, which fronts busy E. Wisconsin Ave. with the Federal Building across the street. You will find here a magnificent collection of 2,000 rare books in fine bindings, presented to the club on July 22nd, 1910 by Lydia Payne in memory of her husband, Henry Clay Payne, a Postmaster General in the Theodore Roosevelt administration. Club old timers will tell you that these books are “relatively new,” and were assembled in under two decades after the original Payne library perished in the Newhall House Fire of 1883.

Among the modern works are the 130 volumes of “The War of the Rebellion: Official Records of the Union and Confederate Armies,” published between 1880 and 1901. “Science and the Hebrew Tradition,” might be a good read and is the closest thing to Judaica you’ll find in the place, including among the names engrossed in the membership rolls. The club, a story in Milwaukee Magazine once reported, did not allow Jews as members until the 1990s. 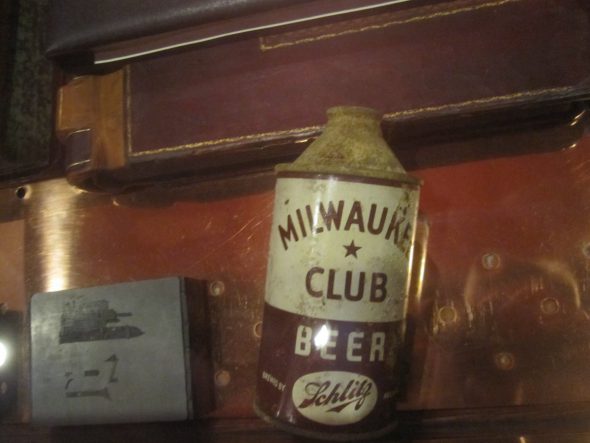 The lobby also has a tiled floor, and some old artifacts like advertisements in a display cabinet for Milwaukee Club beer, once brewed especially for members by the Joseph Schlitz Brewing Company. The tall case clock in the lobby was a gift of William Uihlein, one of the many members of the brewing family who were also club members over the generations. You will note an abundance of fireplaces, all kept in working order and frequently used. Oak, which is too common a wood to serve in the club’s interior, is instead burned in the walk-in fireplaces.

We learn from Zimmermann that:

the fireplace mantels were supplied by Milwaukee’s Conway Mfg. Co, which made them from special designs which were copyrighted … ‘Preventing their duplication elsewhere.'”

The tilework was by Henry Diblee, and the stained glass by McNally & Miles of Chicago, while club member T. A. Chapman, then Milwaukee’s most prominent merchant, provided the linens for the $50,000 club built on its $16,000 lot.

Back to the Tap Room

The bar room is topped with a Jacobean ornamental plaster ceiling, with a ship’s wheel light fixture pendant above. The fireplace with its custom mantle is flanked with stained-glass windows. The tap room lies within an arched doorway, with a discreet paneled wall divider located steps within, ensuring the privacy of the occupants, while enabling access for the waiters and customers. Just behind the temporary bar (which has been there forever) is a wall with plaster and wood vertical accents, hosting a number of English portraits of the 18th Century hunter genre, a theme that would be a cliche if found in a Trump resort, but is perfectly in sync here. A swinging door padded in red leather leads to a service area, which is terre inconnue for any gentleman, and thus beyond the scope of our inquiry. Bourbon, Scotch and gin seem to be the preferred spirits here, especially for casual drinking. The wine list can be trotted out for dinner. Although the Milwaukee Club Beer is no longer served, the place offers Lakefront products on tap, drawn from somewhere beyond the red leather padded door. Before we leave to find our seats in the library, take a look at the painting entitled “The Bootblack,” painted in 1866 by Englishman John-George Browne. It’s the best painting in the house, which includes Wisconsin artists like Richard Lorenz, Max Fernekes, Francesco Spicuzza, Ernest Roth, George New, and Paul Hammersmith. 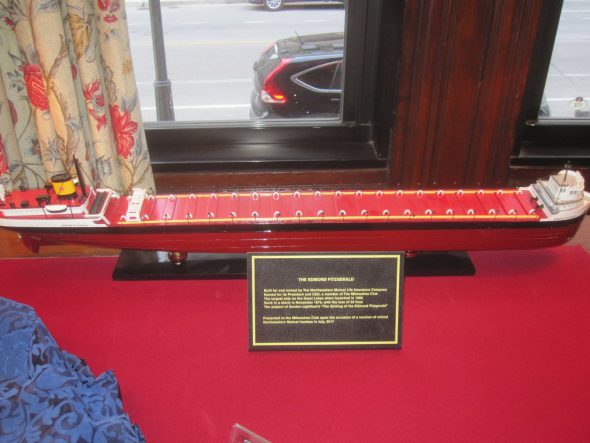 The Browne painting shows an appealing young lad with the tools of his trade in hand, and no customer in sight. Perhaps the painting recalled to some of the self-made men of the Milwaukee Club their humble origins, while reminding other members from more privileged backgrounds of a life they never had to pursue.

And possibly that their shoes could use a shine.
It reminds one that unlike the University Club or the Milwaukee Athletic Club, the Milwaukee Club has not had to resort to selling its art collection to keep the doors open.
Houseboy! Fetch me another Scotch. I’ll be seated at the table with the scale model of the Edmund Fitzgerald, reading Zimmermann’s history of the Village of River Hills. 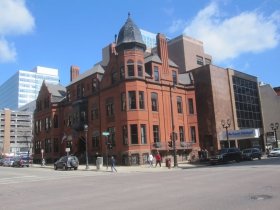 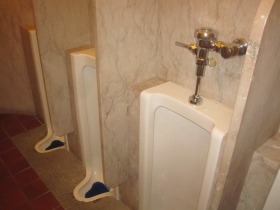 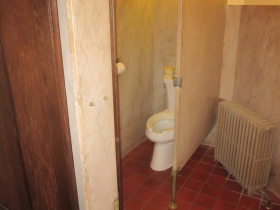 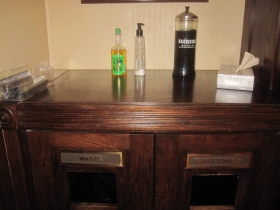 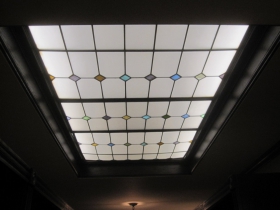 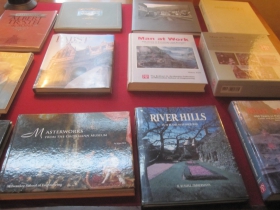