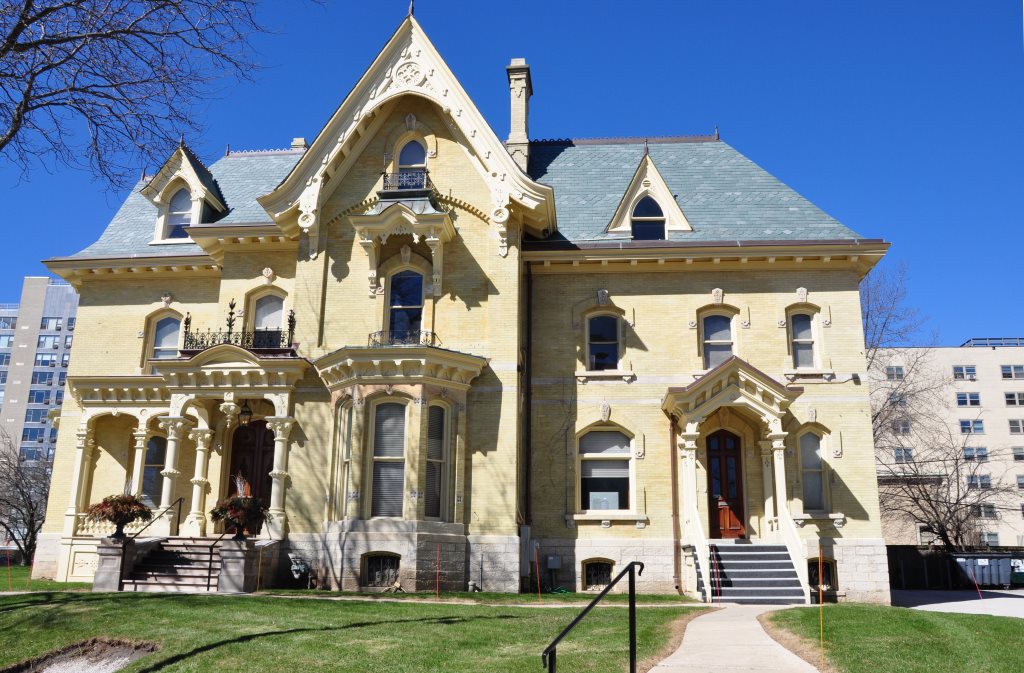 Jason Downer (1813-1883) came to Milwaukee from Vermont in 1842 and undertook the practice of law. He was the first editor of the Milwaukee Sentinel when it became a daily in 1844, but quit after a half year, returning to the law. He served on the Wisconsin Supreme Court from 1864 to 1867, when once again he returned to the law. In 1874 he built a Prospect avenue mansion that has recently been exhaustively and spectacularly restored by famed architectural historian H. Russell Zimmermann and now serves as the Milwaukee Art Museum Research Center.

In 1969, the Historic American Buildings Survey was sufficiently impressed with the structure at what is now 1201 N. Prospect Ave. that its researcher pronounced it “one of the finest specimens of Victorian Gothic architecture in the city of Milwaukee.” Although, like many of its contemporaries, it had been converted to office use, the old home “has seen fewer changes than most of its contemporaries and survives in reasonably good condition,” the report noted. Among the unchanged details were the front doors of mahogany, by then hidden under paint. Missing were the original front porch, decorative crockets, cresting and finials upon the Vermont slate roof, (since sheathed in asphalt shingles) and an elaborate carved finial surmounting the newel post of the home’s impressive front stairs. Altered were such things as the Cream City brick, smothered in an unappealing blue paint, the gutter and downspout system and other elements.

The home’s relatively fine condition notwithstanding, even the slightest alteration of an Edward Townsend Mix building serves as a battle cry to Zimmermann, the ardent preservationist whose restoration portfolio includes the WE Energies headquarters in the Public Service Building and the Grain Exchange Room in the Mix-designed 1879 Mackie Building (nee Chamber of Commerce). He also designed and made drawings for the last circus band wagon built in America.

Both home and architect had a significant benefactor in the person of Dan Wilhelms, the owner of the building. He and Zimmermann had worked together on the restoration of the Emanuel Adler home, another fine mansion-turned-office at 1681 N. Prospect Ave. at the southwest corner of E. Brady St. for which the owner received an award from the City of Milwaukee Historic Preservation Commission in 2017.

Zimmermann’s connections to the property go back to 1963, when, as a young architect, the Kentucky native was permitted to remove anything from the building that was not affixed to the structure. A settee from the Downer era remains to this day in Zimmermann’s office in the Railway Exchange Building. There was a certain ambiguity in the instructions as to what could be removed, and Zimmermann, naturally drawn to the finial at the staircase, gave it a wiggle and found that it moved. It was not strictly nailed down, but his conscience would not permit him to take the artifact.

On October 16th, 1963, reporter Violet Dewey of the Milwaukee Journal interviewed Mrs. Harry K. Robinson, who lived in the home with her family, serving as caretakers. For over 80 years, since the 1888 death of Downer’s widow Alcy, the home had been owned by the nearby Immanuel Presbyterian Church, and operated as the “Downer House for Retired and Fatigued Ministers.”

Retired and fatigued Presbyterian ministers were not by definition a particularly rowdy lot, which helps to explain the home’s relatively fine condition. But the house itself presented its demands and challenges, particularly in the form of that finial. Dewey tells the story of the Robinson family’s first encounter with the home, as viewed through a dusty window:

‘All I could see was a sort of wooden totem pole.’ This proved to be one of those fat, ornately carved newel posts that the late Victorians were so fond of and that seem to be a combination of every design that occurred to the wood turner in the throes of creation.

Since that first weird impression, Mrs. Robinson has grown rather fond of the post, except for the constant dusting of it…”

By 1969, when the building was inspected by the National Park Service, the newell-post finial was gone. According to Zimmermann, the finial, like many of Milwaukee’s High Victorian Victorian artifacts, was stolen.

But there were other missing things to be rediscovered by Zimmermann as part of the restoration process. The mahogany entry doors were stripped, crockets were cast for the roofline and new Vermont slate was ordered. Zimmermann the detective also wanted to restore the original porch, yet had some gaps in his historic knowledge of its structure. Using logic, vanishing points, his architectural knowledge and perhaps a bit of luck, Zimmermann calculated what he figured to be the original dimensions of the missing porch where for decades retired and fatigued ministers sought their leisure.

He transferred his calculations to full scale and marked a spot on the lawn of the home, instructing a laborer to start digging there. A few scoops of dirt later, the worker hit an obstruction — one of the original pilings that supported the lost porch. There still remained some issues about the profile of the porch and its supports. Again, a bit of detective work and serendipity led to a portion of the exterior that had been covered. When removed, it revealed a ghost image of a porch column that had been laid against the brick. Once copied, Zimmermann had his prototype and restoration of this significant element of the structure was begun.

When an architect himself reaches the age of a historic building, the thought of legacy naturally comes to mind. Zimmermann did not intend this to be a “pop-up” restoration. He wanted it to last. Regrettably, porches are the first things to go on an old house, as many readers will attest. To forestall decay on the reconstructed amenity, Zimmermann specified wood of Pinus Radiata, sourced in New Zealand and shipped to the Netherlands, where it underwent a proprietary Accoya process, wherein the wood is acetylized, rendering it immune from most natural depredations, including rot, insects and woodpeckers. The owner was happy to pay a premium of over five times that of conventional treated lumber for a 50-year guarantee of immunity from the weather.

But what to do about the missing large drop finial for the porch that was merely hung to look pretty? Here, too, Zimmermann found a specialist ready to supply his need in the person of James Gray, a carver in Napa Valley, California who specializes in custom historic restorations. 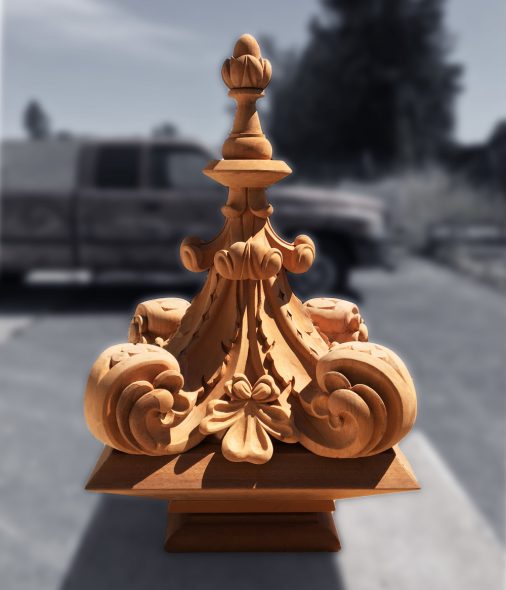 As Gray notes on his Studio Gray blog:

Working together with an architect in Milwaukee Wisconsin, I created this hand carved wooden drop finial, (photo is inverted), for an historic restoration of a wooden porch that was removed for rot in the 1920s, but is back in full glory now. I have considerable experience with restoration of cathedral and ecclesiastical restoration, and commercial and high end residential restoration.  The acanthus type is unique to this home and my knowledge. Seems to be more shamrock than acanthus :).

The results are yours to see at 1201 N. Prospect Ave. The Milwaukee Art Museum Research Center is open by appointment to researchers, but is not a public facility. 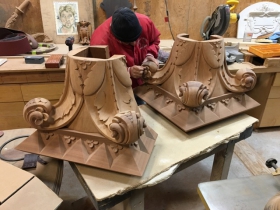 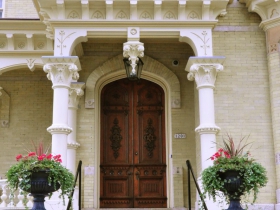 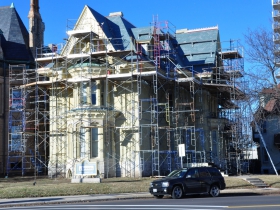 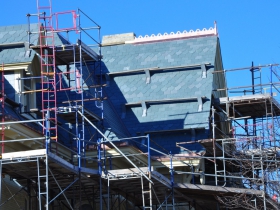 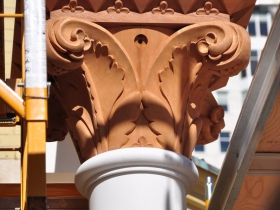 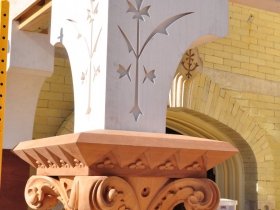 How Milwaukee Is It? The residence is about one-eighth mile northeast of Milwaukee City Hall.