Pete’s Fruit Market, one of his projects, also a big winner. 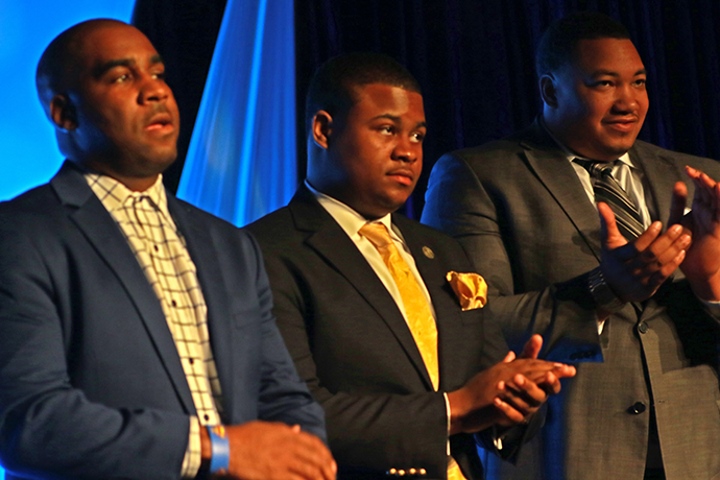 Milwaukee commercial development “superhero” Kalan Haywood, Sr. walked on the stage to collect an individual achievement award at the MANDI dinner Thursday trailed by a half dozen African-American colleagues.

“You see my team here; you see black excellence here,” he said. “I don’t do anything by myself. Most people carry a rabbit’s foot — I carry my men around with me.” Under his dress shirt, Haywood sported a Superman t-shirt.

A native of Milwaukee, Haywood has developed multiple projects in the past 18 years, including homes and commercial spaces. His $25 million Germania building renovation in 2014 made him the first African-American developer to build in downtown Milwaukee.

Asked about the significance of the awards, Haywood said, “I hope we set an example… If it inspires someone else to do it or do it better, that’s what matters.” He added, “No matter what failures you might endure … you can always make a difference.”

Haywood shared the individual leadership award with Dr. Mark Eppli, who created the highly lauded ACRE program at Marquette University in 2005. ACRE, which recruits and trains people of color for careers in commercial real estate, is now run by LISC Milwaukee.

Eppli learned at the event that a new venture capital fund, which will provide early stage investment through a revolving grant to developers, will be named in his honor.

“I didn’t know that was coming,” he said of the fund. “I couldn’t think of a better honor.”

According to Raina Johnson, a manager at AWE, “We have demonstrated how the arts can impact everyday life and create an avenue for creative expression, especially in historically disinvested neighborhoods.”

For the first time this year, the MANDI event, attended by nearly 800 people, included an award specifically for economic development. The new Chase Economic Development Award was presented to Menomonee Valley Partners for the revitalization of Menomonee Valley.

Once an eyesore, the Menomonee Valley has become a national model in economic development and environmental sustainability. The 300 acres are now home to 47 companies and more than 5,000 jobs. One million square feet of green buildings and more than 60 acres of new trails and park space have been constructed, according to Corey Zetts, executive director of Menomonee Valley Partners.

The Northwestern Mutual Collaboration Award, recognizing nonprofits that collaborate and align, was also presented for the first time this year. The winning partners were Literacy Services of Wisconsin and WRTP/BIG STEP for an innovative program that allows individuals to simultaneously receive a High School Equivalency Degree and construction trade credentials in three months. Eric Christophersen, president of the Northwestern Mutual Foundation, announced a $40,000 contribution to support a new cohort of trainees.

All MANDI winners receive a trophy and a $1,000 contribution.

Artists Working in Education received the BMO Harris Bank Cornerstone Award, which recognizes an organization for its commitment and effectiveness over time. The other finalist was Community Improvement Project Matching grants.

The Layton Boulevard West Neighbors Block Club Menu program received the PNC Bank Trailblazer Award, which recognizes an innovative approach to a community problem. The other finalist was Safe & Sound.

Pete’s Fruit Market (developed by the Haywood Group) received the State Farm Building Blocks Award, which recognizes a real estate project that advance the community. The other finalist was the Mitchell Street Branch Library/Alexander Lofts.

Menomonee Valley Partners received the Chase Economic Development Award, which a program that stimulates economic and business development. The other finalist was Northwest Side Community Development Corp.

“These people are working hard to create safe, healthy, vibrant neighborhoods for their community. The MANDIs celebrate these efforts, and offer all of us inspiration and hope for an equitable economic future for all,” said Donsia Strong Hill, executive director of LISC Milwaukee.

More about the MANDIs