BMO Tower is Ready to Rise

Take in the rare view of City Hall before 25-story tower rises.

A key indicator that the development of the 25-story BMO Tower has switched phases from demolition to construction arrived on site this week. The first piece of a tower crane was installed this week along E. Wells St.

The change over presents a once-in-a-generation view of one of Milwaukee’s most attractive buildings, while one of downtown’s least attractive structures is now just a memory. Milwaukee City Hall is now clearly visible from N. Broadway, while the BMO parking garage, originally built in 1967, is no longer blighting one of downtown’s main streets. The view won’t last for long though as the new tower rises.

The 359,920 square-foot tower will replace the 417-stall parking garage at 790 N. Water St. BMO Harris Bank, which acquired M&I Bank in 2011, will occupy 123,000 square-feet in the tower, spread over floors 11 through 15, with a flagship, two-story bank branch on the corner of N. Water and E. Wells streets. Law firm Michael Best & Friedrich will lease 59,000 square-feet of space spread across two-and-a-half floors at the top of the tower. An eight-level parking garage at the base of the tower will include 647 parking spaces.

Irgens Partners is developing the $132 million project. Contracting firm J&H Findorff & Son, Inc. will lead the construction of the new tower. Kahler Slater is serving as the project architect.

A raze permit for the garage was issued on October 3rd, though significant work didn’t get underway until after a formal groundbreaking ceremony on November 16th.

City records list the garage as being built in 1967 in conjunction with the 21-story M&I Bank tower. As part of big redevelopment scheme, Irgens will also redevelop the existing tower. That part of the project won’t start until 2020 at the earliest. Developer Mark Irgens has suggested a mix of uses could be included in the overhauled tower, including workforce housing, a hotel or office space.

The facade, which will be wrapped in glass, reflects a focus on the interior according to Irgens. “We tried to create a clean, sophisticated look with lots of light,” says the developer. This is reflected in the building’s lobby, which Irgens says is unlike any in town. A two-story lobby will be constructed off of N. Water St. and clad in granite and wood. The large space is planned to include a two-story tall video board. Separate elevator banks will service the parking garage and office tower.

We last covered the project in January as demolition was ramping up on the parking garage. 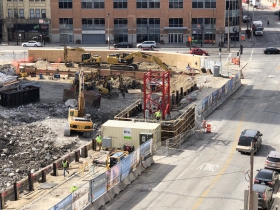 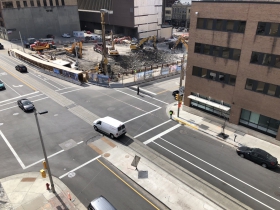 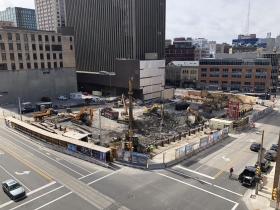 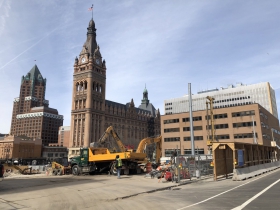 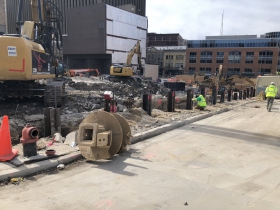 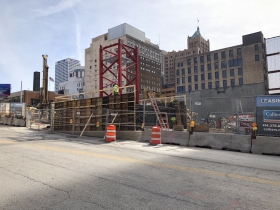