About half of all traffic and pedestrian stops failed to show "reasonable suspicion.”

By Jabril Faraj, Milwaukee Neighborhood News Service - Mar 6th, 2018 11:26 am
Get a daily rundown of the top stories on Urban Milwaukee 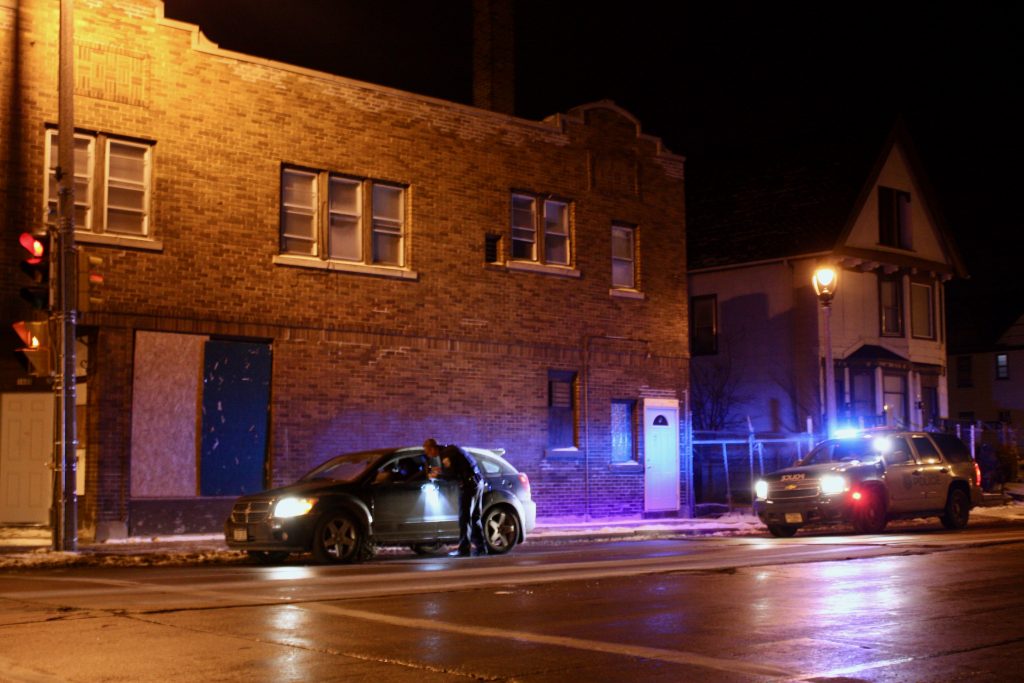 A Milwaukee Police Department officer pulls over a black resident near 35th and Clybourn streets. Photo by Jabril Faraj.

Community leaders are saying three reports recently released by the ACLU of Wisconsin vindicate members of the black community who have for decades protested the way police treated them.

An examination of Milwaukee Police Department (MPD) records of traffic stops, pedestrian stops, frisks and searches between 2010 and 2017 concluded that 350,000 of those stops — 48 percent of traffic stops and 59 percent of pedestrian stops — fail to show “articulable reasonable suspicion of criminal activity or a traffic or vehicle equipment violation.” The review was conducted by Margo Frasier, a criminal justice consultant and former police monitor and sheriff in Texas who was president of the Major County Sheriffs’ Association.

A separate report by David Abrams, a professor of law, business economics, and public policy at the University of Pennsylvania Law School, shows that Milwaukee police conduct more more than three times the number of stops in primarily black and Latino police districts as in white districts. Abrams also found that black and Latino drivers are more likely to be stopped, even in primarily white areas, and are more likely to be searched than white people, despite the fact that searches of white people more often result in discovery of drugs or weapons.

“That’s just the way that they police — they occupy these areas,” said Nate Hamilton, the brother of Dontre Hamilton, who was shot and killed by an officer in 2014. He added, “I feel like the black community’s being used for profit, when it’s all said and done,” citing high rates of incarceration for black men and the fact that poor residents are disproportionately ticketed. 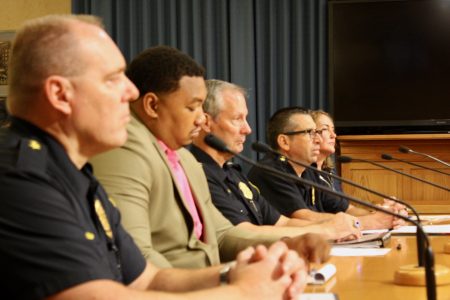 “We knew this was part of (former MPD) Chief Flynn’s policing strategy, which we opposed,” said NAACP President Fred Royal, also a member of the Community Coalition for Quality Policing, an advocacy group that includes the ACLU. Royal said MPD has employed a “broken windows” strategy, which called for officers to preemptively stop people in high-crime areas for questioning “even if their home was in that geographical area.”

MPD’s standard operating procedure governing citizen contacts, field interviews, and search and seizure states an officer must be able to articulate facts that “lead a police member to reasonably believe that criminal activity has been, is being, or is about to be committed.”

In an email, MPD Sgt. Sheronda Grant wrote that during the first week of training, an internal affairs officer “instills the importance of following all guidelines set by the agency and thoroughly explains the agency’s Code of Conduct and Core Values” to recruits. Grant did not say whether MPD officers are tested on, or regularly reminded of, these standards.

The ACLU filed a class action suit early last year alleging that MPD’s stop practices are unconstitutional and racially discriminatory. The suit, which includes nine plaintiffs, is expected to go to trial in May.

ACLU of Wisconsin Legal Director Larry Dupuis said Frasier gave the police department some latitude in evaluating the stops. For example, if an officer documented he or she pulled someone over for a broken tail light, she considered this a sufficient reason for a stop. However, if the officer simply listed “loitering,” that would not be sufficient because “what is commonly thought of as loitering is not, itself, a crime.”

He also said it’s possible that, through court testimony of the officer involved, a particular incident could meet the standard. However, he added there are many stops that never would.

“Even if you went back and … asked every single officer, there’s a huge number of these stops that, under any scenario, are unjustified.”

Flynn defended MPD’s stop policies when the ACLU suit was announced, claiming that the department did not engage in stop-and-frisk because it avoided the “trap” of giving those searched a ticket, unlike in New York City where the practice was ruled unconstitutional in 2013.

The third report concluded not only that MPD maintained unconstitutional stop, frisk and search practices but also that the Fire and Police Commission (FPC), the civilian oversight board tasked with oversight of MPD, “has failed to adequately fulfill its official responsibilities.” The report was prepared by Samuel Walker, professor emeritus of criminal justice at the University of Nebraska and a respected criminal justice consultant,

Walker also concluded that FPC Executive Director MaryNell Regan has little to no understanding about what constitutes a lawful search, based on her deposition. He noted that the FPC’s decision to “believe management” about whether MPD maintains informal quotas for stops, instead of opening an investigation, constitutes “an abdication of the FPC’s basic mandate to provide independent oversight.”

Regan, who has served in the position since September 2015, did not respond to calls and voicemails requesting comment.

Jamaal Smith, racial justice coordinator for the YWCA of Southeast Wisconsin, said the FPC’s inability to provide adequate oversight is borne out by the data. “If you have 350,000 stop records that fail to show officers had reasonable suspicion, someone dropped the ball,” he said.

Smith said FPC commissioners should be required to undergo an orientation that includes basic information, such as police policies and procedures. Hamilton acknowledged the FPC does not have the resources or the information to be successful but said the body needs to be more bold.

Royal and Smith said that Mayor Tom Barrett, who appoints the commissioners, must be held accountable.

Ultimately, however, Hamilton said the responsibility falls to the people of Milwaukee to protect each other. He said individuals must become more knowledgeable about police procedure and policies so they can make specific complaints when those standards are violated. He also said onlookers or passersby must record interactions between citizens and police, adding that it will take people patiently and persistently putting pressure on Barrett, the FPC and interim MPD Chief Alfonso Morales to change the department’s practices.

Royal and Smith said it is essential for the department to implement problem-oriented community policing, and evaluate officers based on their problem-solving and relationship-building ability. Royal suggested giving residents a receipt of police interactions.

“We are people; we are human,” said Smith. “We have to also look at officers in that way as well. But the only way that will happen is if you see officers who are really trying to build (a relationship) with the community.”