Wonderful Prospect Ave. mansion built in 1890 by one of city's best architects. 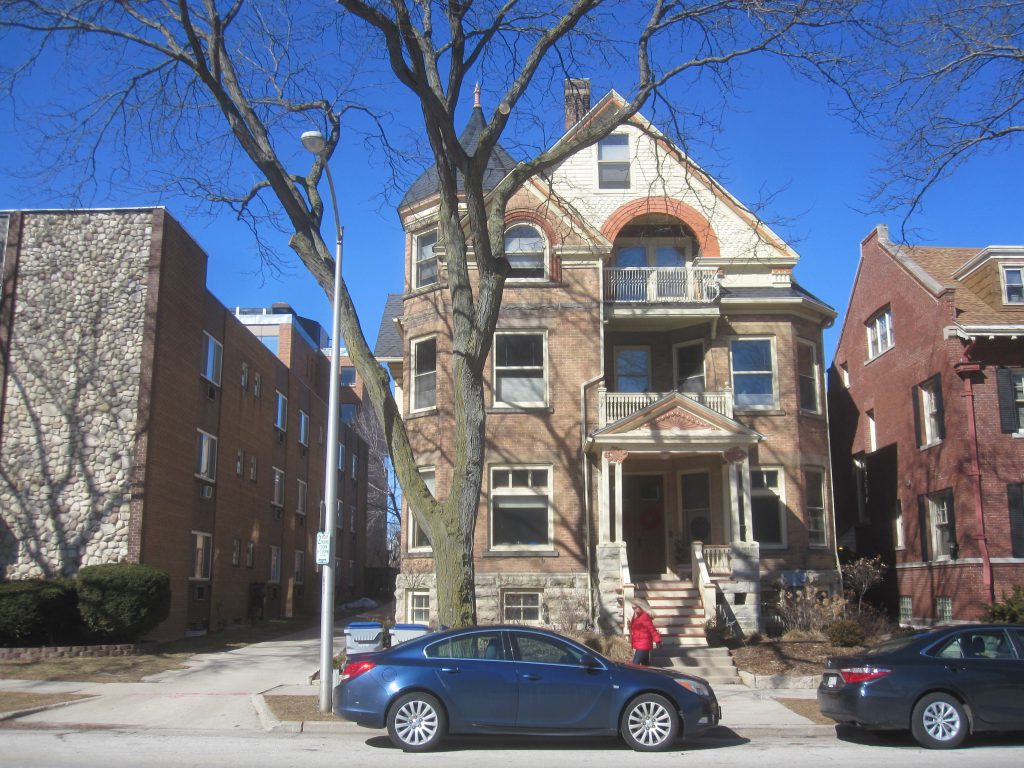 A career at Northwestern Mutual was not for James Douglas, but designing houses for its executives suited him just fine.

In February, I wrote a story about the Louis Frank home at 1616 N. Van Buren St., a fine residence designed by architect James Douglas and slated for demolition for the construction of a new senior living facility. A search for a suitable Douglas home to profile here finds us now on N. Prospect Ave., in front of the mansion Douglas built for Northwestern Mutual Insurance Co. Vice-president Willard Merrill in 1890 for $7,000.

Douglas had a knack for designing grand homes for executives of the Milwaukee insurance giant, including C. H. Watson, the secretary of the firm, whose house next to the Frank home has since been lost.

The connection between the architect and the insurance executives is easy to establish, and yields a surprise. According to an 1881 history of Milwaukee, Douglas, born in Scotland in 1823, arrived here with his parents in 1843, and took work as a carpenter in the pioneer settlement. He was among the crew that built the first bridge to cross the Milwaukee River, as well as the original steeple of the Cathedral of St. John the Evangelist. He carried on this work until 1863, at which time he left the uncertain world of general contracting to take a job with the very stable Mutual Life Insurance Company of the State of Wisconsin, now Northwestern Mutual. That career lasted 10 years, and put Douglas in day-to-day contact with his future clients like Watson and Merrill.

According to his biography:

In the Spring of 1872, feeling that the problem of his destiny could not be worked out to its fullest fruition except in architecture, he severed his connection with the Northwestern and has since devoted his time and talent to the business of architecture, which has from natural bias been his life study.

Douglas prospered in his new career until his death in 1894. He was perhaps the most prolific architect of the Lower East Side, where many homes show evidence of his “Termes Mordax” or anthill style. The name derives from the complicated roofs of many of his homes, which were said to resemble the cone-shaped colonies of African termites. Young architects working for Douglas included Alfred C. Clas, Cornelius Leenhouts, Fred Graf and Otto C. Uehling.

The home that Douglas designed for Willard Merrill [1831-1905], his wife Clara Dickinson Merrill and the couple’s two daughters, Sarah and Grace, at what was then 95-Prospect Ave., included a whopping 6,745 square feet of finished living area. It has three bathrooms, one powder room, seven bedrooms and two family rooms. It was equipped with a pantry for the resident maid and a butler’s pantry for the resident butler. The resident stable hand also bunked somewhere on the property.

It was by no means the grandest of the Prospect Avenue mansions — those were on the east side of the street, overlooking the lake — but it was far more imposing than the modest middle-class houses that Douglas also designed in the neighborhood. The High Victorian home also had any number of adornments associated with a mansion of La Belle Époque including fine woodwork, intricate moldings and whimsical touches like protruding balconies and porches in the gables, stacked one upon another. Even the attic has its own attic.

Upon Willard’s death, the home was occupied by his daughter Grace, still in residence as late as 1940. In March, 1945, Mrs. Margaret A. Stephenson considered turning the place into a convalescent home, anticipating a use now common on that street. But she changed her mind.

By 1947 Prospect Avenue had declined considerably from its glory days, and so did the use of this home when it was purchased by George P. Manz. The new owner turned the place into furnished rooms, following many of the other former grand homes to this ignominious fate. The home, valued at $29,400 in 1929, was by then assessed at a mere $12,500.

There were still a few holdouts on the street, like Mrs. Grant Fitch in the “Lion House” on N. Franklin Pl., (now the home of the Bradley Foundation), and Atty. George D. Van Dyke [1854-1949] who lived at 1306 N. Prospect Ave. Both his father, John H. Van Dyke [1823-1909] and brother, William Duncan Van Dyke served as presidents of Northwestern Mutual.

Running a rooming house was no picnic, Manz learned. On October 6th, 1948, Manz filed a complaint about his tenants with the building inspector, who drafted a report headlined, “Cooking being done in sleeping rooms. Rooming House.”

According to the inspector’s report:

Owner complains that tenants of sleeping room on 2nd fl. having a private bathroom, are cooking. When tenants are questioned they say they are not cooking. Cooking utensils are kept hidden. Advised owner that it is his responsibility to keep the room as sleeping room only.

Missionary Catholic Women to the Rescue

By 1956 the roomers were gone, as was Manz, and the home was purchased by an organization known as the American Missionary Association of Catholic Women for use as a “club room and offices.” Rev. Julius A. Dorszynski signed the deed for the women. In addition to the club room and offices, it appears the home’s appeal as a residence was too much for the missionary women to resist, as the Milwaukee Fire Department listed the place as a “Rooming House 9 rooms – 26 persons” in April, 1958. “Entire basement [2.315 s.f.–Ed.] used for storage of used clothing,” the Bureau of Fire Prevention and Investigation inspector wrote disapprovingly. The organization was to remain in the building until the current owner returned the home into private residence status in 1981, and only after interviewing her as to her suitability.

In April, 1981, Carolyn A. White bought the home as her residence, paying $150,000. By then almost every remaining old mansion on the street had been converted into offices. Those that did not survive, including two buildings immediately to the south, were replaced by some of the most hideously ugly apartment buildings ever constructed in the city. Other lots were combined, especially on the lake side, and turned into large senior living facilities, including the Milwaukee Jewish Home and Saint John’s on the Lake. Still other mansions gave way to high rise luxury apartments.

White, an artist and educator, headed the Milwaukee Art Museum/Milwaukee Public Schools’ satellite program, and was looking for a new home. She later told a reporter, “I wanted to buy in the downtown area, and I wanted an interesting home on the Lower East Side. … But I hadn’t originally planned to live on Prospect.” Mindful of her teacher’s budget, and considering the vast amount of space under the Termes Mordax roof, she took out a permit that year to convert the single family residence into two duplex apartments, hiring R. Leon Garcia as the carpenter.

Such a conversion naturally attracted the attention of the assessor, who dropped in for a visit in 1984 with the home back on the tax rolls after a three-decade absence. His notebook was soon filled with his impressions: “First floor — Kitchen, Dining Room, Living Rm., Powder room, Bedroom / Den, ‘Receiving Room’ — Immense. Full width of Hse., ART, Fpl.+ Elaborate large oak staircase. … Second floor 1 bath, 3 br. Front half belongs with 1st floor unit.”

Of course, the assessor needed something to complain about, so he emphasized the “OLD butlers pantry,” as if he had one at home that was newer and better. There were other faults, despite the interior and exterior being in “Very Good” condition. “Renovation work on 2nd and 3rd not entirely 1st class workmanship – esp. the drywall. Only 1 heating facility for both units. Highest and Best uses here is probably office space.”

For the last 37 years, despite the assessor’s wish, this has been a residence, now occupied by Carolyn White-Travanti, and her husband Leon Travanti, a retired UW-Milwaukee art professor, whom she married in 1986.

A Party for Home’s 100th Birthday

The original building permit for the home was dated July 3rd, 1889, and the owners thought it would be fun to hold a party for 100 friends to celebrate its first 100 years. Dave Jensen of the Milwaukee Journal wrote a story headlined “East Side Survivor Comes Back Strong.” He took a look around the house with an eye considerably less jaded than that of the assessor, and marveled at the home’s splendid detail and ornateness. His attention was drawn to the second floor stair balcony, which takes advantage of its prominent position to show off a bit. “The balcony … suddenly curves outward, as if the architect realized at the last minute that he was about to commit a straight line,” Jensen noted in a terse bit of architectural criticism that might have amused James Douglas.

Today the home looks as handsome as could be, with no trace of the grime and deferred maintenance that marked it during the rooming house days. It sits beside other old mansions that are now largely converted to office space, and is particularly convenient to 1451 Renaissance Place, the event space located in a 1907 Christian Science Church building. Should the Travantis decide to abandon their home, renounce their U.S. citizenship and become Mexican nationals, no problem, since the Consulado de México en Milwaukee is just steps away.

Arable land is in short supply on N. Prospect Ave., but the owners have made the most of their small front plot to plant it with hardy perennials like hydrangea and stella d’oro daylily. A pair of pots alongside the stairs to the home was decorated for the holiday season. Their current state is a reminder that Christmas is now more than two months gone. The massive stone foundation of the home is very effective at trapping the warmth of the sun, much to the pleasure of the thousands of paperwhite flowers that have already budded here. There is some irony that this James Douglas house, now located on a street lined with senior housing, should remain a private residence, while the Douglas home at 1616 N. Van Buren St. will be sacrificed to become senior housing. It is hoped that the Van Buren home could be moved; certainly that is the opinion of Carlen Hatala, the City of Milwaukee’s Historic Preservation officer.

The Merrill Family Papers are located at the Milwaukee County Historical Society, and include treasures for the historian, with personal papers, photos of the residence and other ephemera of Merrill and his family. Merrill’s expense books from 1883 until 1903 are among the items in the collection, as are his reading glasses, which are so easy to misplace. At some point these items came into the custody of Northwestern Mutual. The collection’s handling by the insurer shows it is as careful with ephemera as it is with its members’ assets.

According to the archival note:

Collection transferred to the Milwaukee County Historical Society by Northwestern Mutual Life Insurance Co. on Jan. 7, 2009 with consent of the original donor.  Collection was already arranged and boxed by NML archivist. 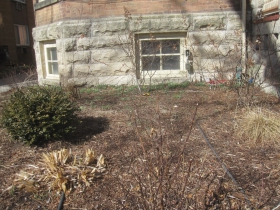 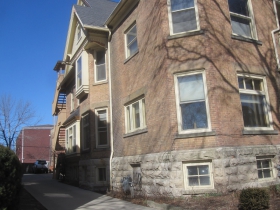 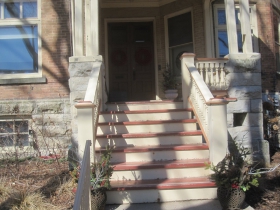 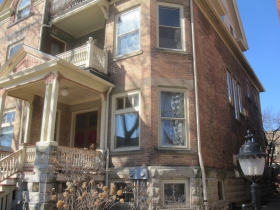 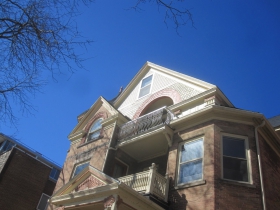 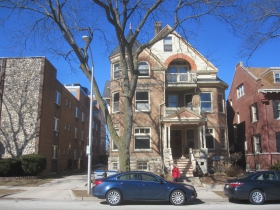 How Milwaukee Is It? The residence is about one mile east-northeast of Milwaukee City Hall.