The Lessons of Amazon’s City Search

What can Milwaukee learn from from losing its bid for Amazon’s headquarters?

Early this year, Amazon announced the 20 finalists who are possible locations for its second headquarters. To no one’s surprise—and the relief of many Milwaukeeans–Milwaukee failed to make the list. Asking cities for their proposals seems to have two goals: (1) Identifying a city that best meet Amazon’s needs, particularly in staffing and (2) extracting a large amount of funds from that city.

Some skeptics believe that the second goal dominates. Amazon has shown it’s no slouch when it comes to getting local government subsidies, particularly for its distribution centers. It is also a master of analyzing data, suggesting that it does not need the help of local governments when it comes to the analytical part of choosing the second headquarters city. But simply announcing the city that makes most sense for the company would reduce its leverage for obtaining subsidies from that city and its state.

Still, it is useful to look for common elements in the cities that made the first cut. The Brookings Institution tried some reverse engineering on the Amazon decision based on factors that Amazon stressed in its request for proposal. Using US Census data, Brookings matched the finalists against the percentage of adults between the ages of 25 and 34 with a college degree.

Fourteen of the nineteen US finalists (Toronto was the 20th) are in metropolitan areas that rank in the top twenty for this demographic measure. This is shown in the chart below. In most cases there are obvious explanations for why cities in the top 20 metros were not chosen. Either they were too small or too close to Amazon’s existing headquarters. The only really surprising omission is Minneapolis—number 9 in the percentage of college graduates. 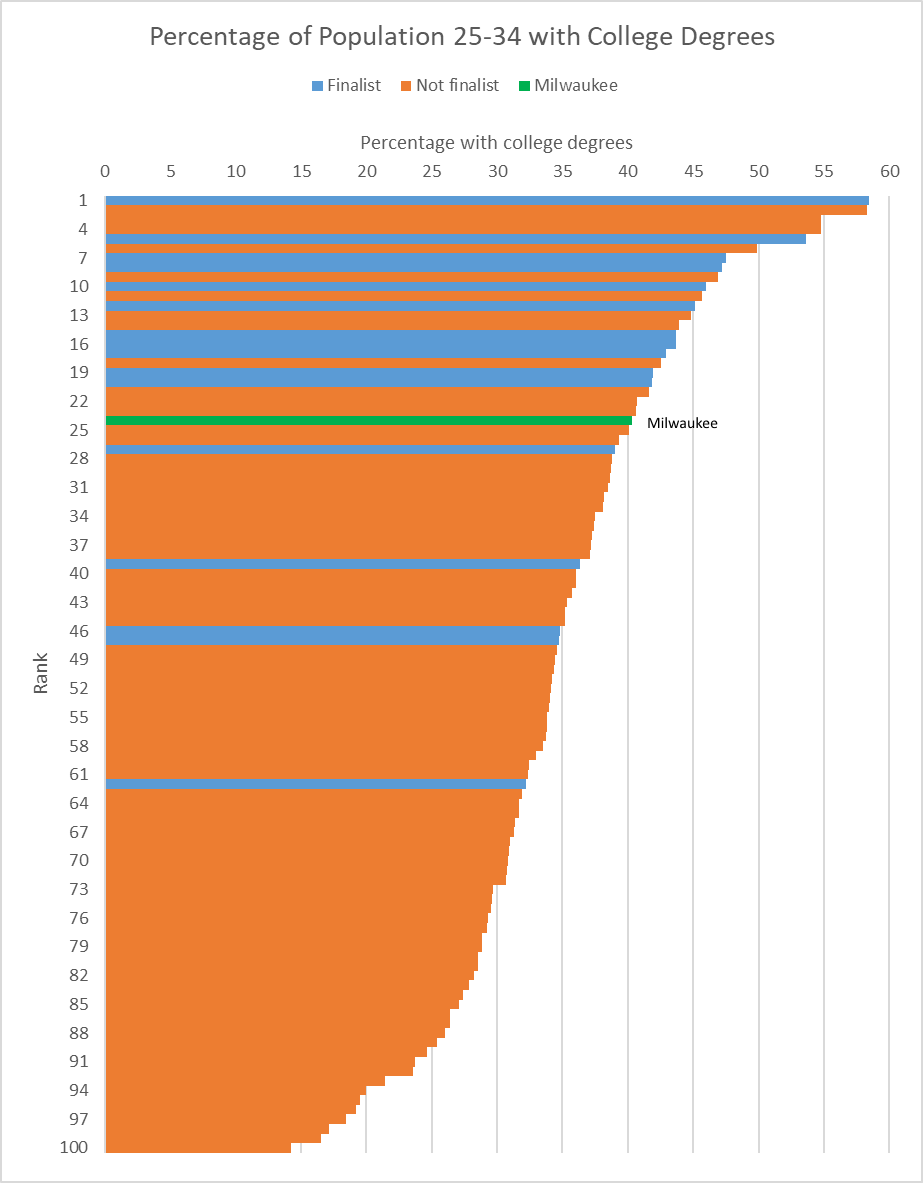 Percentage of Population 25-34 with College Degrees

That leaves five finalists outside the top 20 metros. Four of these are very large–Atlanta, Los Angeles, Dallas, and Miami—so Amazon may have concluded that sheer numbers made up for a lower percentage of college graduates. Indianapolis is the exception: a finalist while 39th in college graduates and 34th in size.

A big surprise is how well Milwaukee ranks on this metric: 40 percent of Milwaukee’s older Millennials have college degrees placing Milwaukee in 24th place. If indeed the future lies with cities with an educated population, this implies that Milwaukee is in a fairly good position.

That is the good news. The bad news is that between 2010 and 2015, Milwaukee’s Millennial population, aged 18 to 35, grew by only 1.9 percent. According to the same Brookings study, this low percentage growth puts the four-county Milwaukee metropolitan area in 95th place among the hundred largest metros. This would seem to undermine the value of having a well-educated population. Having a higher percentage of college graduates does not do much if they don’t stick around.

One interpretation of Amazon’s 2nd headquarters approach is that it is trying to benefit from two contradictory economic development strategies. One says that the way for a city or state to prosper is to make lavish offers to firms considering establishing facilities. Such offers often combine monetary rewards and relief from regulations. We are seeing a lot of them in Wisconsin.

The second strategy argues that a better path for cities and states is to work to create an environment that people want to live in. The trouble is, such civic amenities—ranging from college education for students who come from low income families to robust public transportation to environmental protection–are expensive.

The first model starts with the need to keep businesses happy. These are, to those on the right, the “job creators.” Since employers create jobs, the thinking goes, the key to prosperity is to keep businesses happy. If they are sufficiently happy, they will build plants and other facilities that employ residents of a state or metro area. The trick to prosperity, then, is to reward these “makers” so that they will choose to build their factory in our state rather than somewhere else.

An extreme version of this model was promoted by Ayn Rand in her novel Atlas Shrugged. In it the main characters are plagued by parasitic “takers” who try to steal their business while contributing little value to the economy. Eventually they discover a libertarian paradise established by the legendary John Galt, who has convinced most of his other makers to go on strike and thus crashing the American economy. In reality one of the strengths of a free market is that the resulting vacuum would be quickly filled by entrepreneurs who viewed the absence of the existing businesses as a great opportunity.

Over the past seven years, Wisconsin’s government has enthusiastically endorsed the business-centric model, reducing taxes on business, eliminating environmental and other regulations, skewing labor law to the management side, and generally following “business friendly” policies. It is really hard to find credible evidence that these policies have had a positive effect on job numbers.

A recent analysis by the Economic Policy Institute of the many government subsidies for Amazon fulfillment centers found:

no evidence that overall employment increased, and in some instances employment even fell relative to comparison counties. The implication was that the commitments made to win Amazon’s facilities ― subsidies likely worth over $1 billion dollars in total ― usually were enough of a drag on the rest of the economy, either by imposing a higher tax burden or diverting resources, to more than offset any jobs and spending created by Amazon.

In searching for a city to house its second headquarters, Amazon and its leader Jeff Bezos seem to be putting a high priority on the city’s quality of life, the environment, and the educational attainment of its population, while crippling the city’s ability to supply those amenities. As Dean Baker wrote, Amazon’s request for proposals might be best viewed as “Jeff Bezos’ quest to find America’s stupidest mayor.”

6 thoughts on “Data Wonk: The Lessons of Amazon’s City Search”