The Life of a Muralist

Milwaukee artist has done murals in Milwaukee, Mexico and Colombia. 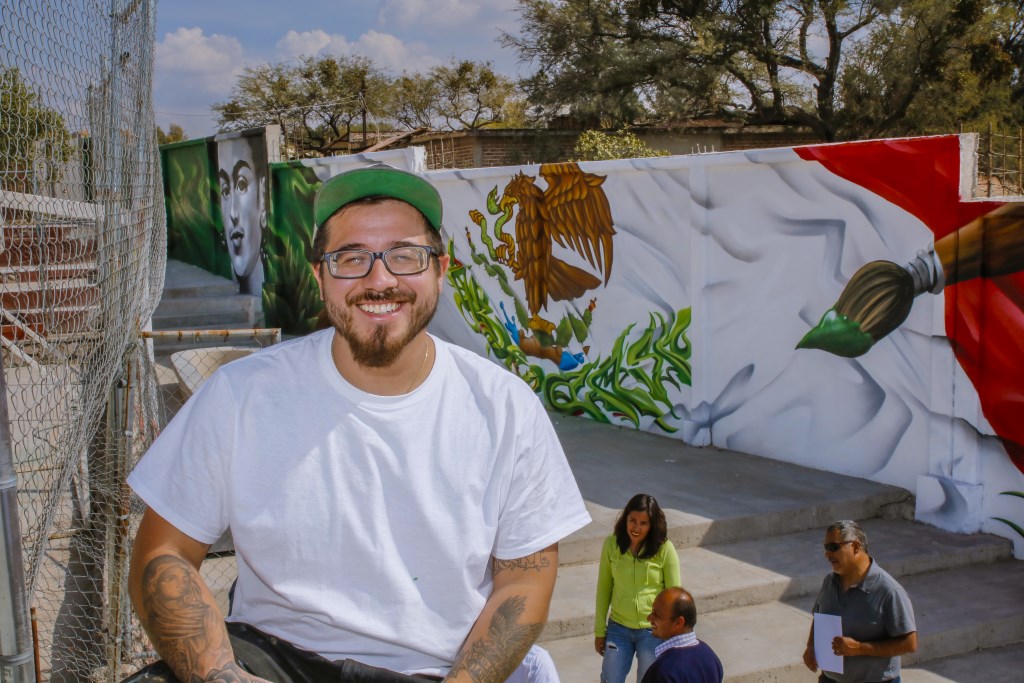 Chacho Lopez is all smiles as he sits in front of the completed mural. Photo by Rafael Montero.

Sitting at his work desk at his studio in Walker’s Point, Chacho Lopez is surrounded by walls full of paint, doodles and graffiti. Every day Lopez is creating art and working towards becoming the best artistic version of himself. An artist of several working mediums, Lopez is a tattooer at Walker’s Point Tattoo Co., as well as a muralist and artist at the Walker’s Point Creative Collective.

During his teen years, Lopez found himself getting into trouble with the law for his graffiti, landing him tickets for loitering, trespassing and vandalism. Lopez describes graffiti and street painting as something that was always a part of his life, from the time he was just five years old.

In recent years, Lopez has used his graffiti background as a tool to give back and create murals around his home town. He’s contributed a total of 30 murals to neighborhoods and organizations in Milwaukee.

“It’s gratifying to do big murals,” Lopez said. “It feels good giving back to the neighborhoods I grew up in.”

In graffiti, there’s a mentality of wanting to put up a tag or a roller anywhere you can. Lopez still has that energetic drive to put his art up wherever he is able to, but as an adult does it in a more positive way.

“Murals are important for the people and for the children because it makes you proud of your neighborhood and proud of your people.” Lopez says.

Lopez’s unbounded energy to create has led him to create murals with Painting It Forward, which focuses on painting culturally-centered murals within schools of impoverished communities both local and worldwide.

Ben Stark founded the organization 10 years ago and last year he asked Lopez to begin working on international murals with him. In December of 2016, Stark and Lopez painted a four-story tall mural in Colombia.

Their most recent project was a ten day trip to Telesecundaria 291 school in San Andrés De La Barranca, Mexico. Together the two artists painted a schoolyard mural that was 180 feet long and nine feet high.

Pablo Mario Montero, the former Coordinator of Bilingual Education of the Department of Education for the State of Guanajuato, connected Stark and Lopez with Juan Leonardo López Sánchez of Telesecundaria. 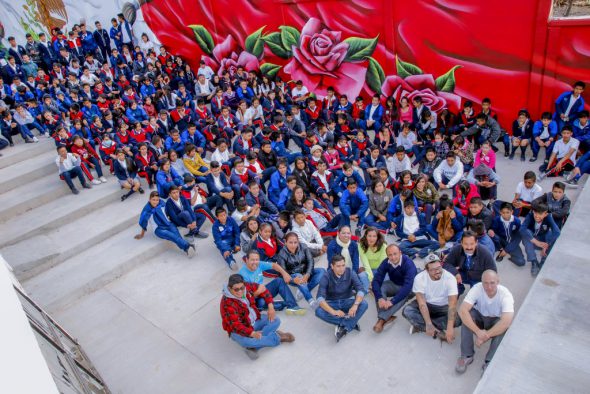 Their mural is of the Mexico flag, adorned with roses, cacti, paintbrushes and a portrait of the country’s celebrated artist: Frida Kahlo.

Other than some supply donations from the school, all expenses for the mural came out of pocket for Stark and Lopez.

“Sure, I have a family to feed,” Lopez says with a chuckle. “But for me it’s just about doing the work and giving back.”

Lopez and Stark say it’s gratifying to do work like this, even for free, because of the sense of pride they feel from serving the communities.

While the artists didn’t feel threatened during their time in Mexico, they were warned by locals they were in a dangerous area. Even the teachers at the school shared a convoy, out of fear of the local cartels. This made Lopez feel like this mural would have a very positive impact for children of that school.

“Half the kids in this little town didn’t even know we could do what we do with spray paint,” Lopez says.

In contrast, both the artists feel an even bigger sense of community pride doing murals outside their own neighborhoods.

Milwaukee aldermen have an idea that some of the murals these artists do are anti-graffiti, Lopez observes, but in reality the artists use the same artistic tool as with graffiti to get the job done. Lopez finds it frustrating that some of the joy gets lost in the process of defending the craft.

“Over here you have to talk to board members, and several other people to make a mural happen,” Lopez said. “It’s better when you can just go for it without having to pitch an idea and go through that whole legal process of permission.”

Lopez and Stark are attracted to the artistic freedom of doing murals in other countries. “I prefer to paint in rural areas abroad because of the lack of exposure.” Stark says.

Lopez and Stark both describe the after-effect of this mural as a really happy gathering. There wasn’t necessarily a mural unveiling, because there was so much interaction from teachers and students while they were working on it.

“Everyone was really happy with it,” Stark says, “and we did a pretty good job in my opinion.” The feeling was mutual, it seems. After the artists were finished with the mural, they received a thank-you ceremony and were gifted with plaques, letters and little origami trophies. 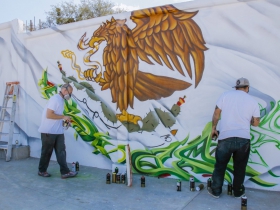 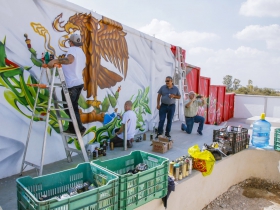 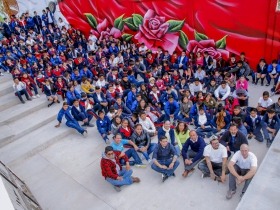 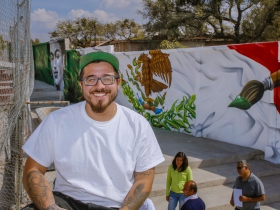 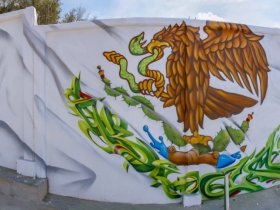 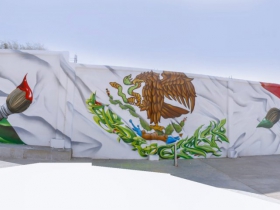