It has some benefits, but not enough to make up for Trump’s health care changes.

In a recent column, the Journal-Sentinel’s Christian Schneider, a reliable Republican advocate, accused Democrats in the state legislature of excessive partisanship for not enthusiastically embracing Governor Walker’s proposal to set up a state “reinsurance” plan to handle high medical bills. Is Schneider right?

The Affordable Care Act—Obamacare–includes two subsidies (summarized here) aimed at making health care affordable. The first is the premium subsidy. This refundable tax credit acts as a cap on the insurance premium that a person must pay.

The subsidy varies with income as shown in the chart below. An individual just above the Federal Poverty Level (FPL)–$12,060 in 2018—gets a subsidy that keeps the net premium for the second most expensive “silver” plan from exceeding 2.01 percent of his or her income. For larger incomes, the cap increases to 9.56 percent of income for someone making between 300 percent and 400 percent of the FPL.

Plans offered on the exchange are rated Gold, Silver, and Bronze, depending on how much of the average treatment costs the plan is projected to cover. Silver plans are designed to cover 70 percent of costs. 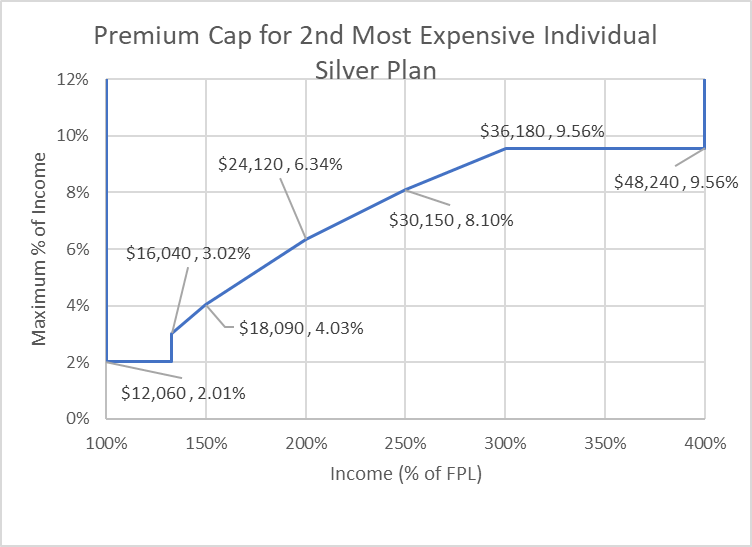 The premium subsidy is available only for those making between 100 percent and 400 percent of the FPL. At the low end, the ACA’s designers mistakenly expected that all states would take advantage of the generous subsidies the ACA offered to states which expanded Medicaid to cover people making up to 133 percent of FPL.

Try entering a $12,050 income into the government’s web site–$10 less than the FPL. Here is how the site responds:

The premium credit also disappears at the upper end, for people making more than 400 percent of FPL–roughly $50,000 for an individual and $100,000 for a family of four.

The second subsidy, called “cost sharing,” is less well known. Available only on silver plans bought through the exchange, it requires insurance companies to pick up part of their enrollees out-of-pocket costs, deductibles, copayments, and coinsurance. Cost sharing is limited to enrollees whose income is less than 250 percent of the FPL. As the next chart shows, for people making slightly more than the FPL, this subsidy reduces the consumer’s share of silver plan costs from 30 percent to 6 percent. 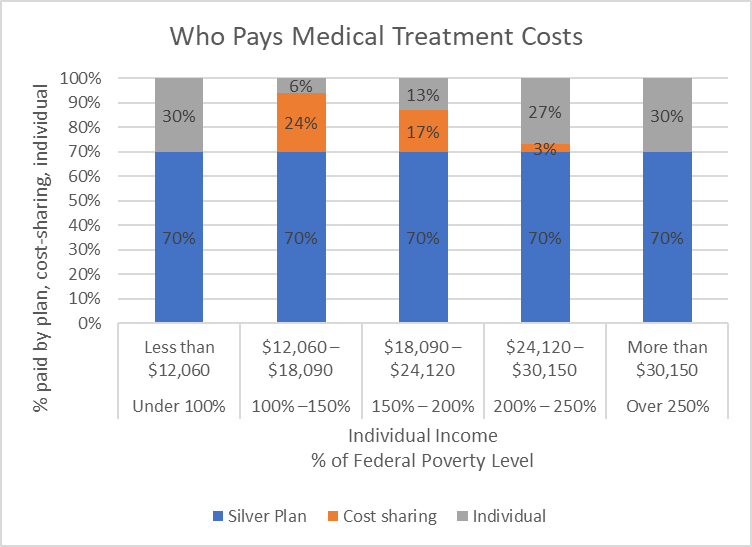 The law commits the government to reimburse insurers for their cost-sharing expenditures. However, the Trump administration has refused to reimburse the insurers, citing the lack of a Congressional appropriation.

Most insurers responded by increasing premiums for their silver plans. Increased premiums triggered higher premium subsidies for those who qualified, leaving them in largely the same place as before. However, those not qualifying for the subsidies faced steeply higher costs.

How does all this play out for someone looking to buy health insurance? The next chart shows cost estimates from the government website for a sixty-year-old Milwaukee man considering an individual plan. The chart shows the website’s estimate of total costs at various incomes under three scenarios—low, medium, and high usage. The chart shows estimated total costs of bronze and silver plans from “Together With CCHP.” Average usage estimates are shown as solid lines; high and low usage costs are shown as dotted lines. 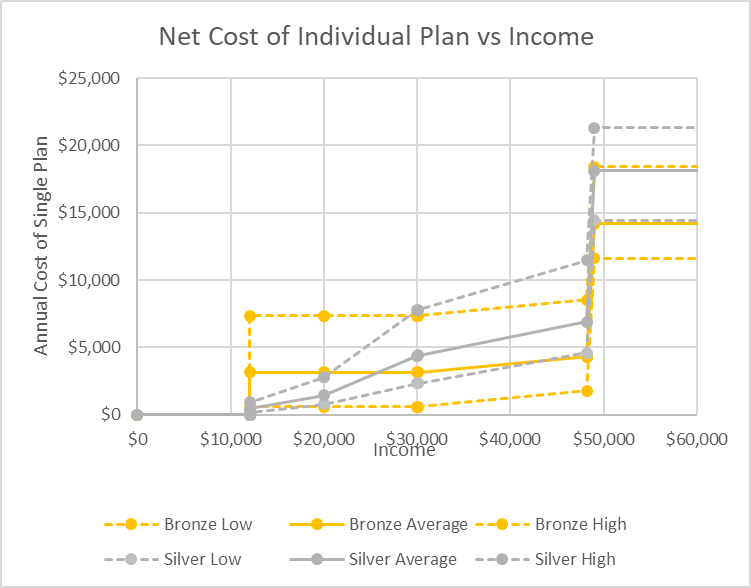 The next chart shows total cost as a percentage of income, using the high and average usage scenarios. Again, availability of cost sharing determines whether one should choose a bronze or silver plan. 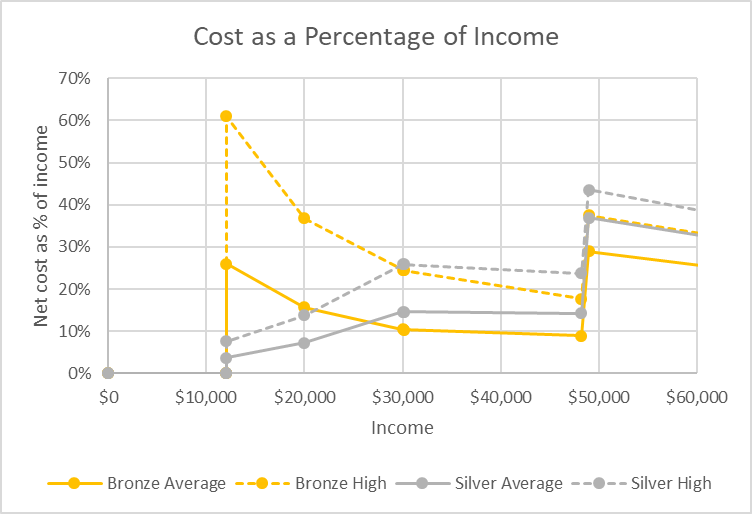 Cost as a Percentage of Income

This chart shows the quandary for people whose income places them near 300 percent of the FPL. Consider a 60-year-old man who makes $48,000 and is offered a $1,000 raise. That raise could be very expensive. Doing so is likely to increase his health care costs by around $10,000. Likewise, with medium usage he would see his medical costs jump from 9 percent of income to 29 percent. Increased income could be very expensive.

It appears that Wisconsin is about to follow Oregon and Minnesota to establish a “reinsurance” plan in which the state assumes responsibility for the portion of medical bills over a certain threshold. This would reduce the cost to insurers, allowing them to reduce premiums. If the reduction in premiums is large enough, a “virtuous cycle” could result in which lower premiums encourage healthier people to sign up, leading to still lower costs and premiums.

A study by the healthcare consultant Avalere concluded that, in the words of its title, “funding reinsurance and cost-sharing reductions would lower individual market premiums and increase enrollment,” although funding the cost-sharing reductions would have the largest effect of the two. It also points out that “it is important not to overlook the negative impact of repealing the individual mandate on long-term market stability.”

In other words, the governor’s plan is a small step in the right direction, but not nearly enough to compensate for the damage the Trump administration has already made in health care affordability by refusing to fund cost-sharing, repealing the individual mandate, and generally discouraging enrollment.

Should the Democrats have, as Schneider seems to suggest, complimented the governor for taking this small step, rather than suggesting additional moves to make insurance more affordable? Perhaps partly their criticism reflects frustration at the way the increasingly partisan Republicans have shut them out of the decision-making process. Schneider has done his part to encourage this polarization.

Perhaps there was also a bit of strategic thinking behind the Democrats’ opposition. For them to endorse the governor’s proposal might have been the kiss of death reminding Republicans that their goal is supposed to be end of Obamacare.

As we have seen, Trump’s actions helped make medical care unaffordable for 60-year-old men whose income falls near $50,000 if an individual or $100,000 if part of a family of four. Ironically that profile closely fits the profile of voters who put Trump over the top. This is very odd: most politicians, no matter how corrupt, show some solicitude for their supporters.