Mostly familiar fare but tasty. And the addictive desserts are a surprise. 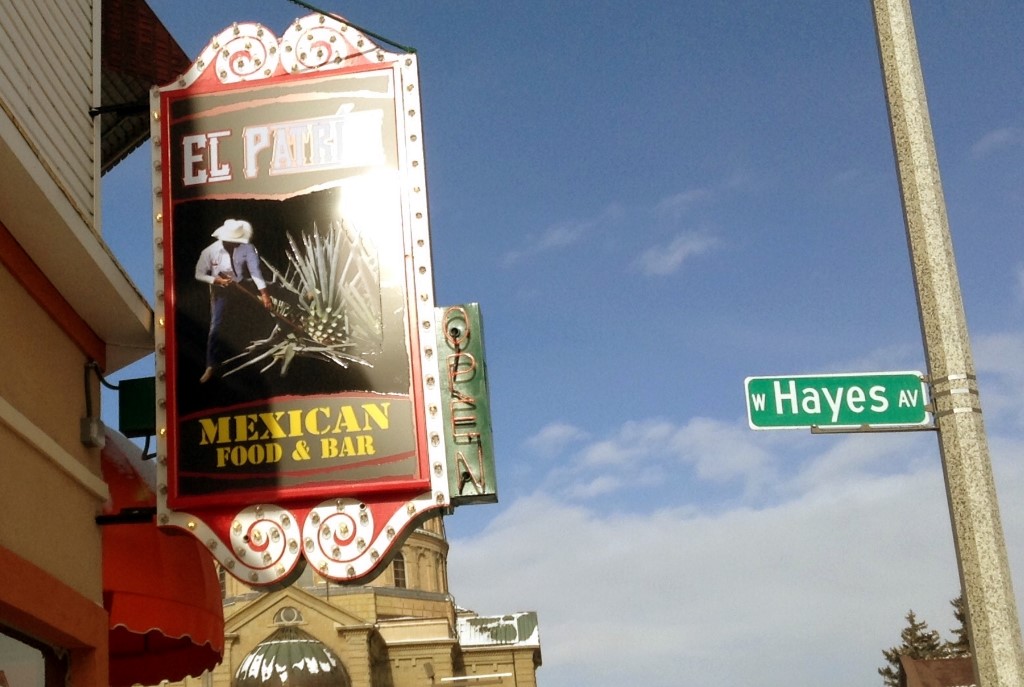 El Patron means “the boss” in Spanish. There’s a lot to like here and plenty to choose from on a menu that runs the gamut from a single fish taco on the a-la-carte menu to Molcajete, a house specialty from Jalisco. For the Molcajete, they fill a bowl with three meats, steak, chicken, and shrimp, then add peppers and onions, melt some cheese on top and polish this extravaganza with sliced avocado. A single serving will set you back $15.99, or double your pleasure for $27.99.

The menu at El Patron holds few surprises with the exception of that Molcajete and the weekend specials: Caldo de Res (beef soup); Caldo de Camaron (shrimp soup); Menudo (soup made with beef stomach aka tripe) by the bowl or the gallon; and Birria de Borrego Estile Jalisco (lamb stew). 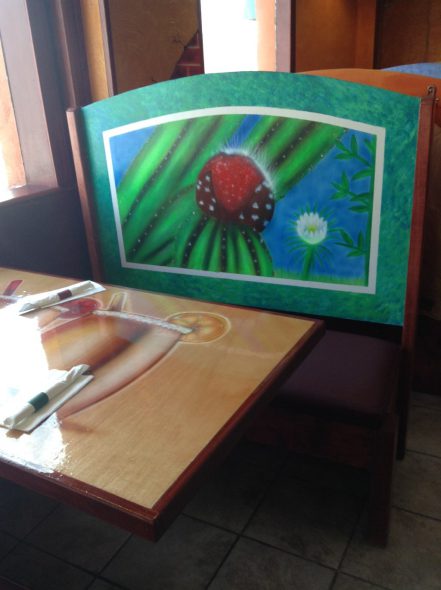 A small mural decorates the back of a bench in a booth. Photo by Cari Taylor-Carlson.

The first thing you notice at El Patron is the décor, not just the wall murals, but the smaller ones that decorate the backs of the benches for the booths. The restaurant bursts with the clear bright happy colors we associate with Mexico. This large space also manages to be cozy if you choose to sit in a booth.

From the lengthy menu, you can’t miss if you order from a la carte — a Shrimp Taco, a Fish Taco or a Tostada de Ceviche. Add sides of rice and beans and you have a meal for less than $10.00. Instead of deep-fried fish for the fish taco, they shred whitefish and serve it open-faced with chopped onion and cilantro, the way I want my fish tacos from now on. The Tostada de Ceviche, piled high with shrimp, tasted as fresh as any ceviche I’ve had, including when I knew it came straight from the sea. They finished this made-to-order tostada with chopped onion and sliced avocado, minus jalapeno as per my request.

The side order of guacamole needed help. It was improved by the addition of a drizzle of lime, a squirt of hot sauce from the squeeze bottle, and a pinch of salt. From Lunch Specials ($7.99-$8.99 Monday-Friday 11-3), enchiladas, two to a plate, were smothered with a mantle of melted cheese, but the filling, Pastor Pork, one of six meat choices, needed a little less salt. The specials come with rice, beans, and a small lettuce and tomato salad.

From the Dessert menu, Fried Ice Cream sounded too good to miss. Sharing this sweet mess, and I mean that as a compliment, is recommended. The ice cream wasn’t fried inside a crust the way it’s often made. This ice cream came in a pastry cup with strawberries, maraschino cherries, chocolate sauce and whipped cream, a photo-worthy dessert which we devoured.

Another Lunch Special, Chile Relleno, served with tortillas, rice, and beans, wasn’t exceptional, but made a tasty meal for $7.99. The red sauce, slightly sweet, had plenty of onions and peppers. Because it was fairly bland, like the salsa our server brought with chips when we arrived, it needed the hot sauce in the squeeze bottle. I could put that hot sauce on my morning toast and like it! When your mouth starts to burn, you can neutralize the heat with Horchata, sweet cinnamon-flavored rice milk that pairs well with spicy Mexican cuisine.

From the breakfast menu, served all day, Chilaquiles, a belly buster, had the right balance of fried tortillas, melted cheese, onions and peppers in a red sauce, two fried eggs, and two dollops of sour cream. This classic Mexican breakfast will not leave you wanting second helpings. Did I mention it comes with rice and beans?

It would be hard to name a favorite from the desserts. That Fried Ice Cream from a first visit left me wanting more so a friend and I ordered the Flan and the Churros. The rich creamy flan came in a puddle of caramel sauce and the churros were unexpectedly stuffed with cajeta, sweet caramelized goat’s milk that tastes like the familiar sweetened condensed milk. They came to the table just out of the deep fryer, a delightful finale to a meal.

After two visits here’s what we found: excellent service; tasty familiar food; reasonable prices; addictive desserts. If you’re in the neighborhood, that’s more than enough to recommend a meal at El Patron. 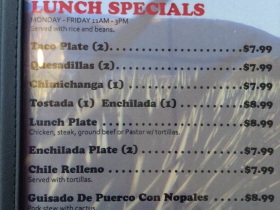 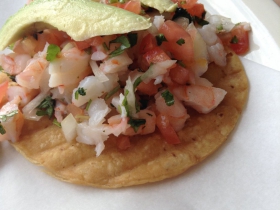 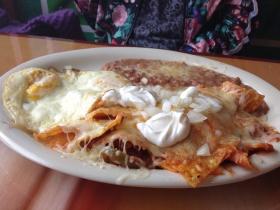 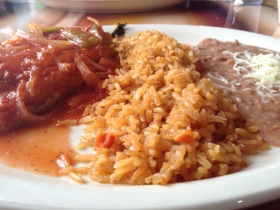 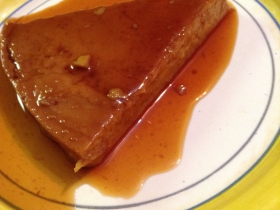 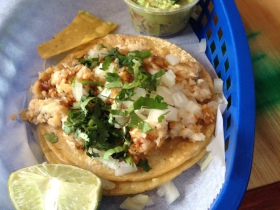 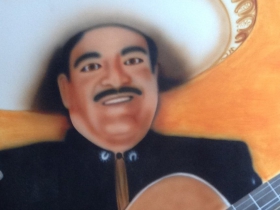 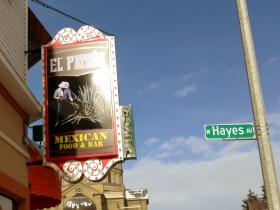 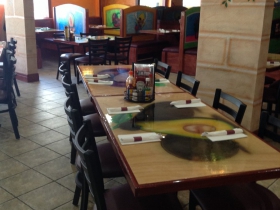 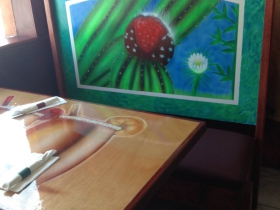 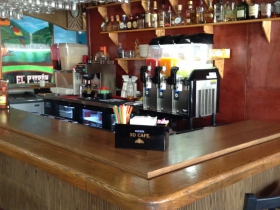 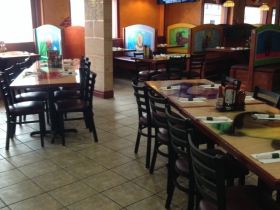