No contributions to it since 2013, only enough to fund six days of operations.

By Tamarine Cornelius, Wisconsin Budget Project - Feb 14th, 2018 11:57 am
Get a daily rundown of the top stories on Urban Milwaukee

The different plans for what to do with the state’s budget surplus have one thing in common: they offer short-term benefits at the expense of long-term gains in economic stability. Many lawmakers seem to be viewing the surplus as an opportunity to provide election-year tax rebates—raising questions about whether they are focused more on securing their re-election than promoting broadly-shared prosperity across the state.

At the end of the 2019 fiscal year, Wisconsin will have $138 million more in its General Fund than was anticipated when lawmakers passed the two-year budget last year. Lawmakers are seeking ways to spend those additional resources, and the plans have gone through several variations, starting with a proposal for a child tax credit that Governor Walker announced in his State of the State address last month. 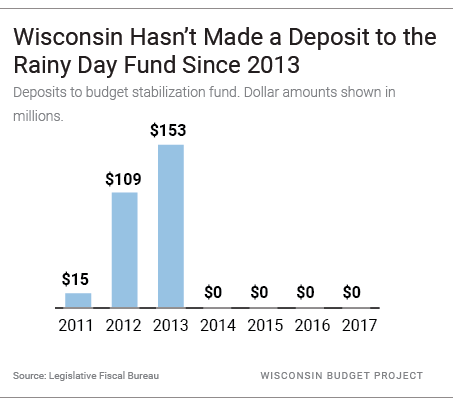 The best use for a short-term surplus like this one would be to deposit it in the state’s rainy day fund. Regularly putting money into the state’s rainy day fund during periods of sustained economic growth helps build up a budget cushion to mitigate the effects of recessions and harmful budget cuts that may occur in the future. But lawmakers haven’t made a contribution to the rainy day fund since 2013, instead choosing to use surpluses to fund tax cuts that have mostly benefited Wisconsin’s highest earners. As a result, Wisconsin’s rainy day fund is woefully undersized and is only big enough to fund about six days’ worth of state operations.

When the Legislative Fiscal Bureau calculated the $138 million figure for the surplus, it counted on lawmakers making a $38 million contribution to the rainy day fund, following a state law that requires half of higher-than-anticipated tax revenues to be deposited into the fund. But lawmakers have brushed off that requirement in the past when there have been budget surpluses and could do so again. To make up for squandering past opportunities, lawmakers should put the whole surplus amount into the rainy day fund, not just the minimum amount required by law.

Instead of setting the money aside for a time of greater need, Governor Walker has announced that he has reached an agreement with the leader of the State Assembly to spend the surplus through two one-time tax breaks:

There is no word on whether the agreement includes a deposit in the rainy day fund. State Senate Majority Leader, Scott Fitzgerald, has indicated he does not favor a sales tax holiday.  The Governor made a similar proposal in his 2017-19 budget bill, but it was rejected by the Joint Finance Committee. Distributing the additional resources via a sales tax holiday is a gimmick that would reduce the resources available to support Wisconsin’s K-12 schools, University of Wisconsin System, and communities without providing any real economic benefit. Instead of encouraging consumers to increase spending, the tax holiday would simply shift the timing of purchases. Wealthier consumers are better situated to shift the timing of their purchases, an option not always open to families living paycheck to paycheck.

The child tax credit is another example of a short-term thinking at the expense of the long-term stability of essential public services—but unlike the sales tax holiday, it would at least give a targeted economic boost to families with children. Governor Walker has gone back and forth on whether or not families with low incomes should receive the credit; excluding them would severely reduce the effectiveness of the credit in helping families make ends meet.

The surplus represents an opportunity for lawmakers to undertake careful budget stewardship that could pay off in long-term benefits for Wisconsin’s schools, workforce, and communities. Setting aside money now, when revenues are higher than anticipated will help the state avoid painful spending cuts or tax increases during the next recession. Instead, policymakers seem set on a course of cutting taxes as the state heads into an election, without prioritizing the future needs of our kids, families, and communities.