The House of Fraud

Owner of Downer Woods home has a dozen different names and is charged with fraud. 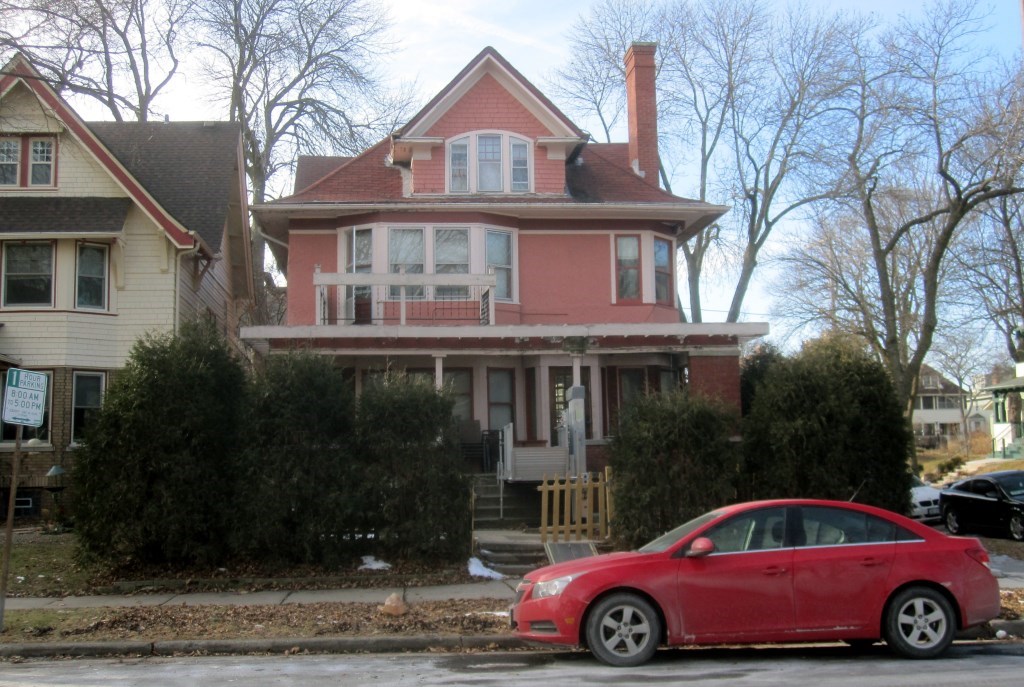 The House of Fraud. Photo by Michael Horne.

At the end of January, a 57-year old woman identified as Marina Kolchinsky Porush was indicted by a federal grand jury with two counts of wire fraud and one count of making a false statement to Social Security Administration investigators studying $150,000 in Supplemental Security Income payments she allegedly fraudulently received. When she made the applications for aid, Porush failed to disclose her interest in some $4 million in real estate, including a strip mall at 7505 W. Bradley Rd. and other properties in Shorewood and South Milwaukee, it was alleged.

According to the charges, Porush “’willingly and knowingly made a materially false, fictitious and fraudulent statement … to Special Agents with the SSA,’” Journal Sentinel reporter Raquel Rutledge wrote in a January 31st article. Rutledge had written in 2013 that the State of Wisconsin Department of Children and Families was investigating Porush for similar claims regarding food and medical assistance she had claimed for her family, including six dependent sons, beginning in 2009. The Wisconsin Department of Justice also filed a claim against her for receiving $151,563 in such benefits. The department “struggled to recover money for over a decade,” Rutledge reported.

As recently as October, 2016, Porush paid $1,544,355.34 to settle a claim against her filed by Associated Bank, one of the many cases against her. Porush filed for bankruptcy twice in 2017. A bankruptcy was voided by a judge for Porush’s failure to make agreed-upon payments. In a hearing in March 2017, U.S. Bankruptcy Judge Susan Kelley said of Porush:

“She is not a credible person. Period.’

“You have a million excuses, M’am. And a million people to blame.”

Porush has lived since December 28th, 2001 in a N. Shepard Ave. home in the Downer Woods neighborhood of Milwaukee. It is a duplex built, at what was then 911-Shepard Ave., in 1909, apparently as an investment or speculative property by a firm known as the Gottschalk Brothers, which also constructed at least two other properties on this block.

Siegfried W. Gottschalk, one of the brothers, was born in Germany in 1863 and brought to Milwaukee as a child. After being involved in the clothing and furniture trade, he got involved in investment, real estate and insurance activities, and was a member of the Milwaukee Turners. He formed his real estate business in 1893, and operated out of the Germania Building, which still stands, and has since been converted to housing. At the time of the construction of this residence, historian Jerome Anthony Watrous said this of Gottschalk’s business:

The firm is now doing a great deal of building of houses stores and flats for homes selling for cash or on the monthly payment plan and it has the reputation of doing first class work. … The enterprise was started just before the panic of 1893 and the fact that it was enabled to become so well established in a year of the worst financial depression ever known in the history of the country speaks more highly for Mr Gottschalk’s capacity as a business man than any words of commendation.

The $8,000 flat, with two units, was designed by Charles J. Keller, an architect with a wide body of work ranging from residential properties like this one to industrial buildings. Madson, Christenson and Ingbretson were the carpenters, while William Leitz, a mason, laid a foundation composed of the newfangled cement blocks for the 29-foot-by-56-foot building located on its corner lot.

In June, 1918 a $500 “frame garage for 2 machines under roof” was added to the property for then-owner J. T. McLaughlin and his machines. Electric lights “IN GARAGE,” the inspector noted with wonder. The poor civil servant probably lacked his own machines and had no need for them to be housed under roof in a garage equipped with electric lights.

By 1938 this home was owned as one of at least 10 rental properties held by Leonard W. Rosnow, a contractor who also owned flats on E. Chambers St., N. Murray Ave, N. Farwell Ave., N. Buffum St. and N. Holton St. (Rosnow’s papers are in the Milwaukee County Historical Society archives.) The Rosnow connection to the property ended in September, 1970, when this home was sold by the Estate of Malinda Rosnow to James and Jane Green, who paid $28,000 for the pile. Eight years later, in 1978 the Greens raked in quite a bit of green for themselves when they sold it to J. Ricker and C. McGrath, for $85,000.

Ricker and McGrath were perhaps enticed by the real estate ad:

In 1990, the investors advertised the home, with particular emphasis on the top floor. “Unit 1 is upper spacious duplex with some leaded windows, natural woodwork. Hidden old world charm.”

The pair netted a $10,000 gain on the sale when artist Hilary Roslyn Goldblatt paid $95,000 for the home. Part of their profit was offset by the $807 expense of having had Seider Heating and Air Conditioning install one HW160P A. O. Smith Gas Boiler in the residence in October, 1979.

In 1981, new owner Hilary didn’t wait until November to decide to get a boiler for the other unit. That May, she called Seider and told the firm (still in business today) to install yet another HW160P A. O. Smith Gas Boiler. By that time, the price had jumped to $980.

As the pair of Milwaukee-made boilers provided warmth to the rooms above, the 85-year old cinder block walls of their basement environs were failing, and water was entering the old structure. As have so many others faced with this crisis, Hilary Goldblatt picked up the phone in July, 1994 and called McCoy Contractors, a specialist in the field.

The problem was with the 30-foot long west wall at the rear and the 50-foot north wall at the side of the house, facing the sidewalk. The fault considerably predated the block laying of mason Leitz and his crew in 1909, and can be traced back about 16,000 years to the actions of the Lake Michigan Lobe of the Laurentide Ice Sheet of the Wisconsinian Glaciation Epoch.

After 100,000 years in the neighborhood, the glacier retreated, but not after having ground once-mighty mountains into dust, creating the clay soil that the workmen excavated for the basement, and reused in part, as backfill for the foundation walls. No material is more abundant locally, or less suited anywhere for that purpose. Its formerly ubiquitous use as fill in residential construction has kept McCoy busy. The firm has repaired over 20,000 foundations from 1956 to today.

For $8,500 McCoy went to work, that July in 1994. The “west (entire) and north (entire) foundation exterior is excavated to footing. Cream City brick (?) is back plastered with cement and waterproofing material. Perforated drain tile and one bleeder installed @ exterior. OK to backfill,” the inspector noted with approval. This time, the fill was gravel, another product of the glacier, hauled in from Waukesha County, where it had been deposited eons before.

The Current Owner Moves In

By whatever name, she has been sued by diverse entities public and private, including Jewish Family Services, Inc., which is not known as being particularly litigious. Judgments for money, presumably for services rendered, were sought against her by the law firms of Greenberg + Hoeschen (case was mediated) and Mary Payne Esq., who received an $871.70 settlement.

But these were mere trifles and diversions for Porush, who often represented herself in court. In 2008 Associated Bank filed a mortgage foreclosure action against Porush. She finally settled in late 2016, paying the $1,544,355.34 judgment. This is an amount of money that a typical recipient of public assistance would not see in a lifetime, so it is easy to understand the government’s interest in her affairs. 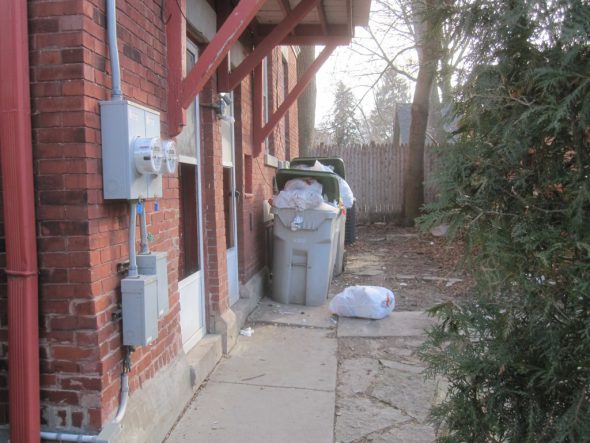 The garbage and recycling bins are overfull, and a bag sits on the ground. Photo by Michael Horne.

The old house, nearing its 110th birthday, retains its original details for the most part, with the exception of an odd porch railing on an upper deck, and the addition of a wheelchair lift on the front of the home, along with an unpainted picket fence and gate, which swung freely upon its hinges on a visit on a windy day. The sidewalks of the home had not seen a shovel after a recent accumulation of snow, since turned to ice, where the feet of pedestrians had trod. Nor had the leaves been raked from the yard and stoop a season before. A look above shows failing soffits, original to the structure, on the south side of the home, while their counterparts on the north show signs of having been crudely repaired, following a city order to do so some years before. Arbor vita hedges, now about 10 years old, are beginning to encroach upon the public way, and should be trimmed. The garbage and recycling bins are overfull, and a bag sits on the ground. The general effect is more of a forlorn frat house than the house of a real estate magnate. Although it is true, in the words of the National Park Service that the historic district here has “much of the same appearance today that it had in 1930,” this derelict residence provides the exception to his statement that “most of the houses have been well maintained.” 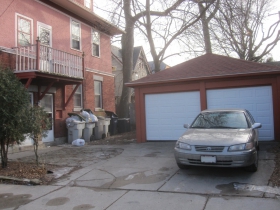 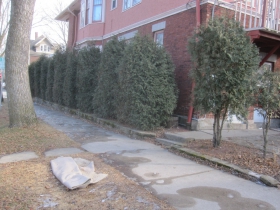 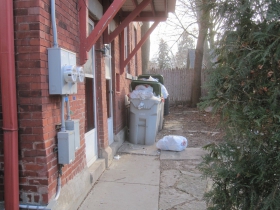 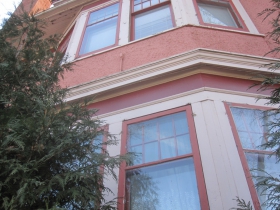 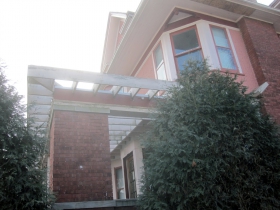 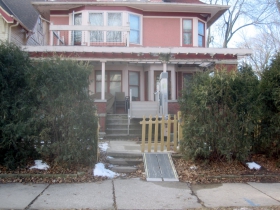 How Milwaukee Is It? The residence is about 3.5 miles north-northeast of Milwaukee City Hall, and just a bit closer to the U.S. District Courthouse for the Eastern District of Wisconsin.

3 thoughts on “House Confidential: The House of Fraud”