The also call for rebuilding trust between community and police.

By Elliot Hughes, Milwaukee Neighborhood News Service - Feb 7th, 2018 10:31 am
Get a daily rundown of the top stories on Urban Milwaukee 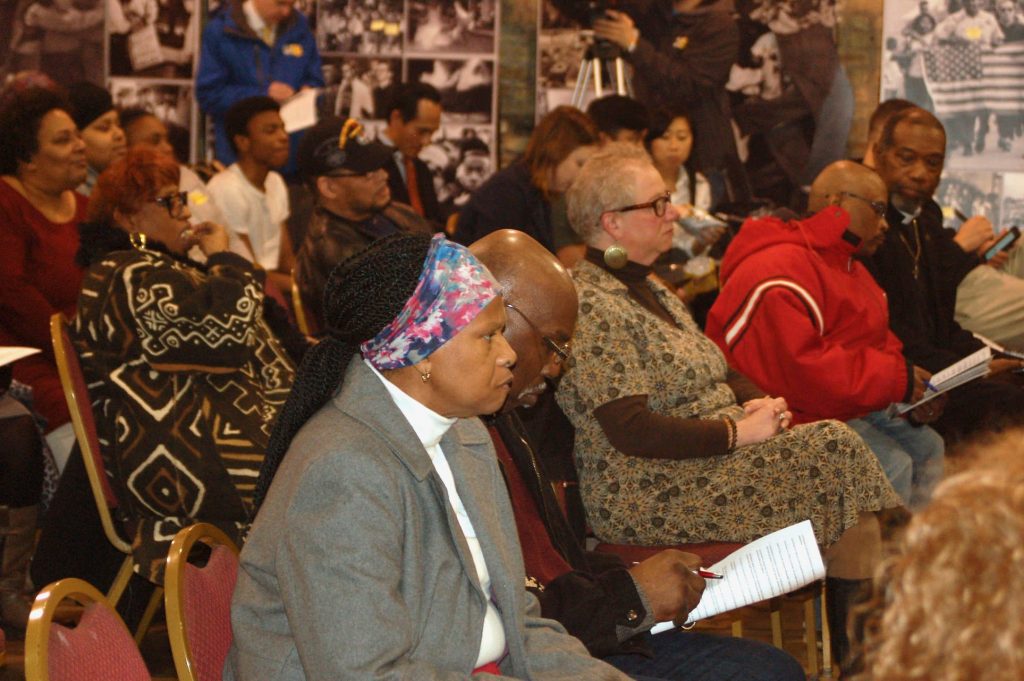 About 100 people attended a recent forum at the Wisconsin Black Historical Society. Photo by Elliot Hughes.

The last time the Milwaukee Police Department was in need of a new chief, it got an outsider with no connection to the city, but who built excitement around his potential to modernize the department and use data to improve policing.

That is not at all the profile that community members are looking for in Edward Flynn’s successor.

Last week, about 100 residents attended a panel discussion at the Wisconsin Black Historical Society about what qualities they would like to see in the city’s next police chief. It was clear that those in the room wanted someone from within the ranks of the Milwaukee Police Department who would work well with others and rebuild trust with the community.

“We would like to see a police chief that the community can trust,” said Regina Howard, a retired MPD captain who served under Flynn and who is also a representative of the League of Martin, which advocates for African-Americans in law enforcement. “Show some respect and treat people with dignity.”

Attendees at the event, hosted by the Community Coalition for Quality Policing and LISC Milwaukee, had an opportunity to fill out questionnaires that will be forwarded to Milwaukee’s Fire and Police Commission, which will hire an interim chief on Feb. 15. But they also had a chance to pepper the panel with questions about the next chief. A timeline for determining the permanent successor has not been announced. 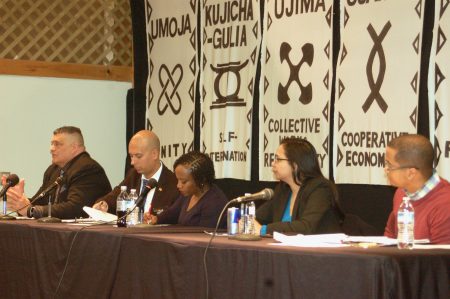 Panel members included Howard, a member of the FPC, a current MPD detective, the president of the police union and a community activist. The discussion was moderated by Donsia Strong Hill, LISC Milwaukee executive director, and Fred Royal, president of the NAACP Milwaukee Branch. Panelists earned the biggest applause whenever they advocated for a chief who is from Milwaukee and would earn the trust of the community, police officers and city officials.

Together, they outlined how trust between the department and the community fizzled out over the last several years. Howard said the department has lost a personal touch with residents — officers simply engaging with people and being respectful.

Panelists also referred to a draft report from the U.S. Department of Justice that concluded MPD’s traffic stop practices have a disparate impact on the African-American community. Alexander Ayala, an MPD detective who is the president of the local chapter of the National Latino Peace Officers Association, admitted that as an officer he was pressured to make traffic stops “at certain locations” in the city.

“The fact that we’re even talking about police-community relations is an issue in itself,” said Jamaal Smith, the racial justice community engagement manager at YWCA Southeast Wisconsin. “Many people feel like you’ve disconnected yourselves from us.”

Smith said it is “vital” that the next chief be someone who has roots in Milwaukee, saying it “breeds authenticity.”

Meanwhile, there are also bridges to rebuild within the department.

Howard described a retaliatory work environment for officers. She said that on more than one occasion, she or coworkers would speak their mind, and if it reflected poorly on superiors, they would be reassigned to “unfavorable assignments” or barred from morning briefings. She said minorities within the department were more susceptible to this kind of treatment.

Marisabel Cabrera, who sits on the FPC, said members of the department have approached her over the years with concerns, but never wanted to go on record with a formal complaint out of fear of retaliation.

Cabrera said the FPC, which is responsible for choosing the next police chief, would be looking at candidates who already have been active in the community and want to expand their involvement. In a Jan. 12 news release, the FPC asserted that “the selection process for the permanent chief will include ample opportunity to meet and discuss the desired qualities that our community has for our city’s next permanent chief of police.”

Last week, the FPC named three finalists for the interim position: Inspector of Police Michael J. Brunson, Assistant Chief of Police James Harpole and Police Captain Alfonso Morales. The candidates will appear at a special FPC meeting at 5:30 p.m. Thursday, at Mexican Fiesta, 2997 S. 20th St., where the public can ask them questions. Cabrera said the point is to see how they interact with community members.

There were clear signs at last week’s event of just how much trust has eroded. At one point, after Cabrera had already outlined the process more than once for selecting the next chief, she faced questions about whether the public could trust the FPC, and whether the FPC or the mayor would pick the next chief.

Cabrera said she had made herself clear and then an audience member yelled:

“And the mayor will have a big input in it, we already know. Don’t lie. God don’t like liars.”