Mopping Up The World

Artist Melissa Dorn Richards has turned one word into an entire exhibition. 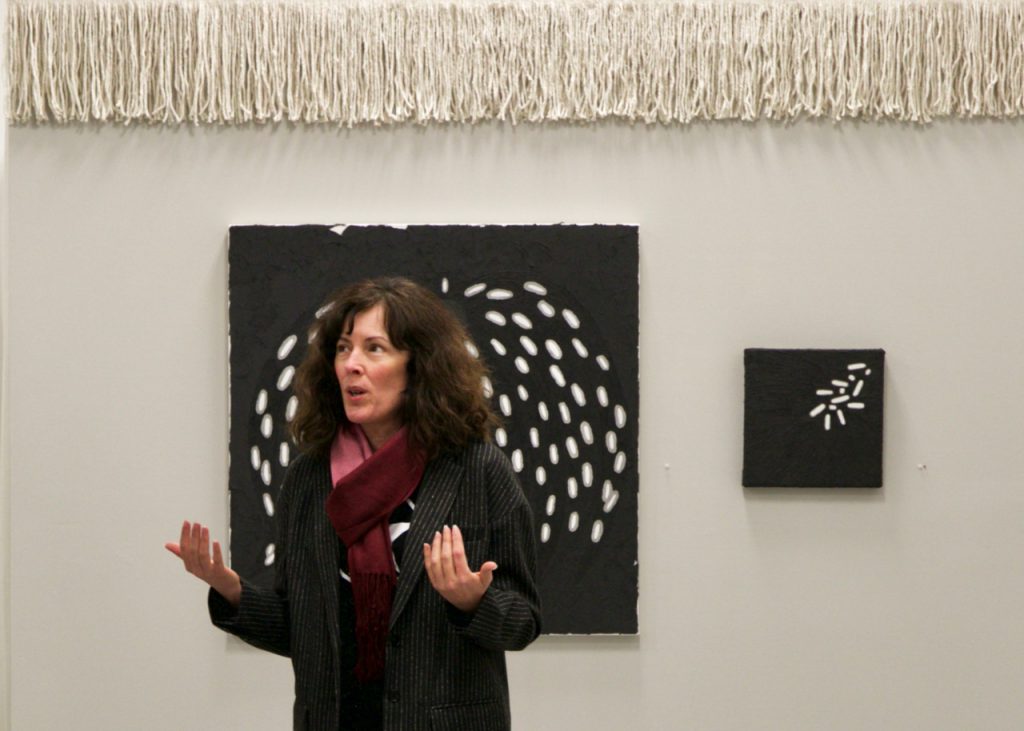 Melissa Dorn Richards discusses her work at the Frank Juarez Gallery. Photo from the gallery.

The word is mop.

Which made Melissa Dorn Richards think of mophead. Her mother used to call her this because she was a curly-headed child.

She came upon the word while reading Sarah Thornton‘s book, 33 Artists in 3 Acts, a series of compelling portraits of contemporary artists. She wrote down the word and began thinking about it. This was in 2015 and that moment has spurred a body of work which has consumed the last three years of her life, leading to the work we see at “Mopping Up,” her current exhibition at Frank Juarez Gallery

Buddhists refer to the expression, “chop wood, carry water” to describe being in the present moment, no matter what the task, with full attention and commitment to that which is being done. In that state of mind the beauty of the wood is seen, the gratitude for the water is felt and the calmness of mind is achieved. Mopping your mind gives your soul space to rest in a turbulent world.

Walking into “Mopping Up,” we enter under bangs of mop-like strands (which hang from the doorway) into the mind of the artist. The entire space is the piece, we are inside her head and the paintings and sculptures in the room are the results of her exploration, her need to make another mark, another object, another observation, another self portrait. Most paintings in the room have a “full head of hair” but other paintings are microscopic views of individual strands, transforming them into playful abstraction. The baseboard is covered in mop material and one notices the physical components of the gallery (the outlets, pillar and corners) a little bit more.

The variety of paint applications is astounding and turns the paintings into objects as much as images. The “black” paint is made from graphite powder and acrylic medium which is mixed into a putty and applied with a palette knife; the white oil paint is pushed and built as the knife’s edge scrapes the canvas. I can hear the paint moving, each mark a moment lined up on the surface in a visible timetable. In most areas the marks are uniform, repetitive meditations, but occasionally, the artist plays with weight and thickness in segmented shapes where crusty mortar slightly sags and hovers above areas of delicate, thin reflective black. The only colors in the show are the red dots of the mop handle holes in the paintings, the yellow holder of the toaster cosy and the thin rim of orange snow fence backing a latch hook piece. Otherwise the art is in black and white and mop colored impasto.

The show is flanked by a small drawing and a large piece made from mop material. The only drawing in the show, an unframed “self-portrait” has a feeling of dreamy solitude and materially feels so thin and fragile compared to the large paintings and objects next to it. Across from the drawing hangs a large latch hook piece: Latch hook is a crafting process by which you knot short strands of yarn in order to make pillows or shag rugs, and this work suggests the pelt of a wooly monster: it feels like it could be wrapped in or laid upon.

Like in latch hook, the surface of many paintings is built with an unfolding of individual strokes divided into segments, the palette knifed paint spreading from the top corner to the bottom in the same way a floor might be mopped: paint loaded onto knife, mop loaded with water and squeezed, paint applied to canvas, mop applied to floor, chop wood, carry water.

But the mops in this room are not about to clean a floor, they have transformed, they point skyward, triumphantly and have turned into symbols, into portraits, into fireworks, extremely controlled explosions of materials and the joy in using them, in exploring their surfaces and textures and sheen. They are monochrome celebrations of a moment of discovery in 2015, when a single word triggered a thought which triggered a series of self-exploratory works.

Show up though Feb 17 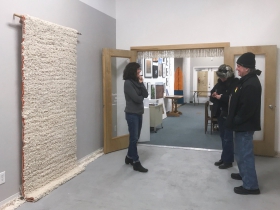 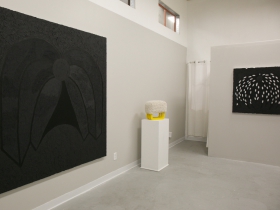 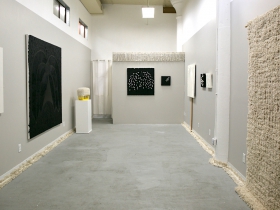 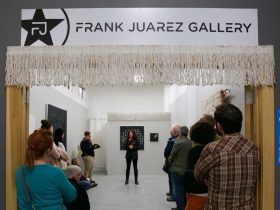 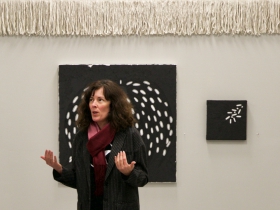 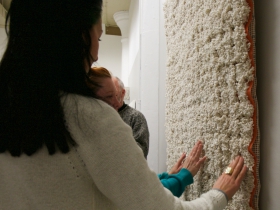 Todd Mrozinski was the Pfister Artist-in-Residence in 2015. His next exhibit “From Ten Till Now: A 33 Year Retrospective,” will be at Thelma Sadoff Center for the Arts in Fond du Lac in April.