Ending 55 years in residency at UWM with two power-packed concerts. 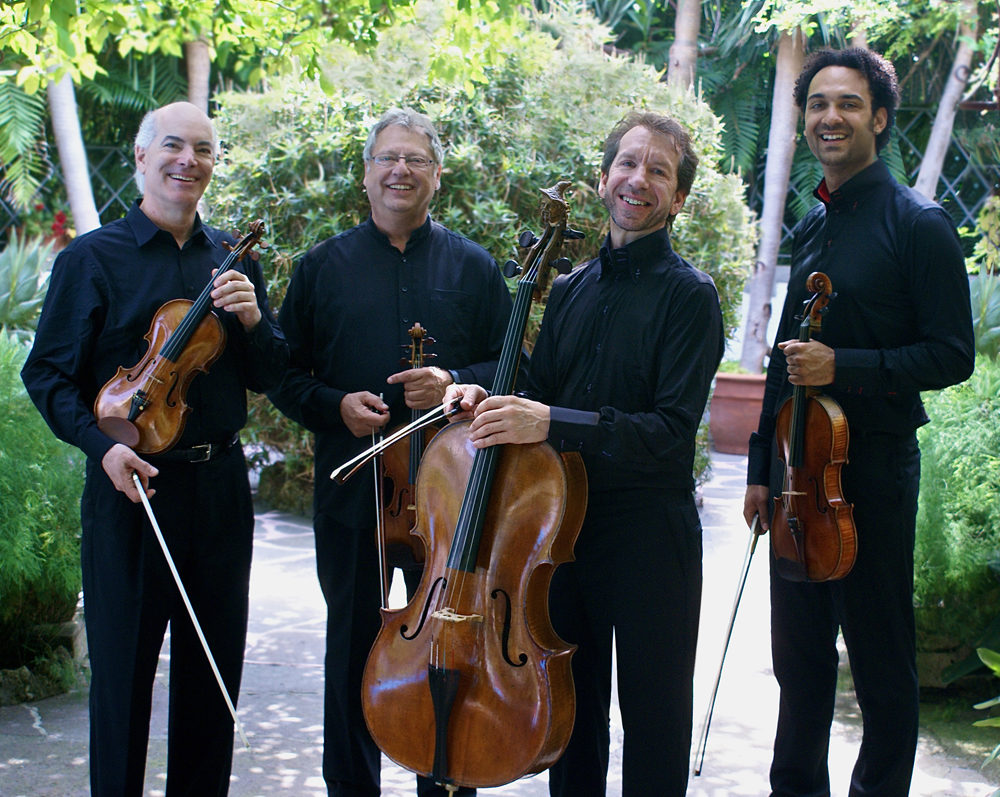 The Fine Arts Quartet ends 55 years in residency at the University of Wisconsin-Milwaukee this weekend with two concerts Saturday and Sunday afternoon. Both concerts are sold out – occupying nearly 800 seats each concert. The group’s members have recently announced that they plan to continue beyond their current 76 years as a Quartet. But the weekend will be a celebration of a long tradition of eight concerts a year in Milwaukee. The Fine Arts Quartet (violinists Ralph Evans and Efim Boico, cellist Robert Cohen and violist Juan-Miguel Hernandez ) welcomes violist Gil Sharon, a frequent guest and long term friend of the Quartet, and cellist Niklas Schmidt, who has appeared in Milwaukee on two recent occasions.

The concerts are the last with the quartet for cellist Cohen and violist Hernandez. After the weekend, Evans and Boico will be joined by the weekend guest artists to comprise the “new” quartet. A recent story offers some of the details of the transition. A campaign has been launched to raise funds from the Milwaukee community to bring the quartet back for concerts in Milwaukee. A three-concert Festival is being planned for June back on the Zelazo stage.

The FAQ’s two concerts this weekend offer a broad survey of the quartet repertoire – familiar works by Mozart, Beethoven and Brahms; an unusual chamber work by prolific orchestrator Tchaikovsky; a contemporary work by Shostakovich, now comfortably in the the standard repertoire; and a work by one of the quartet’s own – by its violinist Ralph Evans.

Ludwig van Beethoven‘s string quartets set the standard for chamber quartets. That set of 16 works tops every chamber quartet’s must-play list. The Fine Arts Quartet has recorded the set at least 3 times over its 76 years. Beethoven’s String Quintet in C minor, Op. 104 on the other hand, is less well known. The work itself is a bridge composition – marking a transition from classical (the first two movements) to the romantic style (the last two). Critic Anthony Short offers a brief synopsis of the work:

The first movement offers innovative key relationships, which defy the dictates of strict classical sonata form: Beethoven wrote the lyrical second subject in the unexpected key of A major rather than the formally ‘correct’ key of G major. The spacious slow movement, deeply expressive and full of rich tone-colours, is followed by a scherzo that is not dissimilar in mood to that from the Second Symphony. The genial trio section is but a small step away from Schubert, and might well have inspired the younger composer a decade or so later. The finale is unparalleled in originality, and its rushing semiquavers, punctuated by sudden loud interjections, have earned it the German nickname ‘Der Sturm’.

Maybe the ensemble deserves credit for finding the key to putting the quintet across. The players cultivate a heavy legato sound that’s somewhat counter to fashion for Beethoven’s chamber music but works like a charm here. The quintet is one of the early Beethoven works that directly inspired the next generation, which never followed him into the profound structural integration of the middle period.

Dmitri Shostakovich’s String Quartet No. 7, Op. 108 (1960) lacks some of the angst and political fire of some of his other quartets, but continues the pattern of explicitly personal writing. Shostakovich dedicated the quartet to the memory of his estranged wife, Nina. Critic Stephan Harris concisely summarizes this transparent, morose work: “His quartet to her is compact and, presumably like their marriage, full of contradictory moods: the first movement being perky, agitated, but full of impish humour; the second dream-like; whilst the third, although at first violent, finally relapses into mellow contemplation.”

Johannes Brahms may have written more than two string sextets, but as a severe critic of his own works, he only kept two. Brahm’s String Sextet No 2 in G major, Op 36 stands out as the masterwork for the Saturday concert.

Six players provide a very different experience than four. Brahms made the most of this combination. Passages contrast the four highest strings with the four lowest – with the violists contributing to both. Themes carried by three balanced string players can be played on a bed of pizzicato accompaniment by others. Pairs of like players share a section, but rarely double.

With six players to work with, Brahms avoided the temptation to create a larger, more dramatic sound. Instead, he created themes of great beauty and motifs that added momentum without fireworks. Brahms was clearly differentiated from Beethoven as he created a relaxed atmosphere with subtle evolution within development, dance movements with subtle changes of emphasis, clever variations and themes and motifs which returned again and again to delight the listener.

The sextet draws its energy from a simple wavering motif that is introduced in the opening moments and reappears in background and foreground again and again. A similar skittering theme appeared in the finale. Pizzicato strings are also generously woven into the work, especially in the second movement scherzo.

The emotional content of this sextet was inspired by a recent abandoned love affair. Brahms weaves Agatha’s name into the score. In one intense cathartic moment in the first movement, he seems to be cleansing himself of her memory.

How can a work of great beauty also express great anguish? Wolfgang Amadeus Mozart’s Quintet in G minor, K 516 demonstrates that Mozart can write in a romantic, emotional style not expected of a “Classical era” musician. The quintet opens on a sorrowful note, descending into deeper tragic sections until a contrasting conclusion. Critics refer to “searing pain .. despair .. fatalism” throughout the work.

The life force of this extraordinary quintet is confronted by emotional outbursts within the score. The driving energy of the first movement marches so insistently that cries and sighs seem less consequential. Even the second movement offers a tender melody just up to the abrupt slashes in the score that rudely interrupt the “dance.” The pace slows for the third movement, as the players share a melancholic theme. The loveliness of the melody distracts from the underlying anguish. The last movement opens with a G minor dirge, only to turn on a dime toward a lively G major rondo. Despite the somber tone, the melodies are lovely and the pace generally brisk.

The Fine Arts Quartet returns in this concert to a composition by one of its own. At age thirteen, Ralph Evans already knew he would commit a lifetime to music. He sketched a three-movement work for violin and piano. Reacting to contemporary styles as “dry exercises, devoid of aesthetic sensibility,” he was challenged to write a work with “tuneful, melodies, lively counterpoint and piquant harmonies.” Under deadline pressures, he submitted the slow movement as an independent work to America’s National Federation of Music Clubs’ 1967 National Composition Competition and won First Prize. The following year, he submitted the fast movement and again took First Prize. Twenty-nine years later, Evans returned to this material, now revised as the four-movement String Quartet No. 1 (1995).

Reflecting on his limited production as a composer, Evans acknowledges:

I would love to compose more, but the responsibilities of being first violinist of a major quartet are overwhelming and I just don’t have enough free time to be able to compose up to my standards. Over the years, I’ve jotted down hundreds of musical ideas, so perhaps, some day when I retire from the Fine Arts Quartet, I’ll be able to return to composing with focus (and great pleasure).

Dave Lewis reviewed the Fine Arts Quartet’s recording of this work for Allmusic.com in 2008 on the Four American Quartets album.

[Evans’ Quartet] is whimsical and clever, and in relation to the Babbitts and Boulezes of that time, this quartet has a Flying Spaghetti Monster-ish aspect to it. It is the Darmstadt school turned on its head, containing no specific references to pre-existing music, yet Evans constructs fleeting figments of tonality in a formal design that is architectonic, rather than based on psychological form or other established strategies. Evans’ quartet is both engaging and amusing and well deserves recording.

Lewis offers no clue as to what he means by “Flying Spaghetti Monster.” I find the quartet succeeds in meeting Evans’ intention to bring “aesthetic sensibility” and “tuneful melodies” to a contemporary work.

In strong contrast to the restrained exposition of other chamber works, Tchaikovsky organizes the sextet on a symphonic scale. The work begins with all players attacking a lively dance. The pace rarely lets up for any of the players, although on occasion, the supporting lines are more subdued. The first violin introduces a lovely second theme in the opening movement, one of several extraordinary melodies throughout the work.

Duets between violinist and cellist as well as between violin and violist are featured in the second cantabile movement over a very soft pizzacato accompaniment. The melodies are interrupted by a highly textured ensemble section with players skating over the strings – a finely coordinated rising and falling in unison. Ensemble choral sections offered moments of contemplation. Impassioned lines on viola frame the movement.
The scherzo features rapidly changing ensemble playing as the sextet ricochets from impassioned bowing to quick pizzicato. The rapid dance briefly becomes a full gallop. But the movement ends as it began, with an complex, intense motif cycling again and again at the pace of a march. The final movement opens with a Russian peasant dance that grows increasingly spirited. A fugal melody passes the energy from player to player as the drama builds to a high energy conclusion.
Altogether, the concerts represent a cross section of the works the Fine Arts Quartet has shared with Milwaukee audiences for decades. The Brahm’s and Tchaikovsky sextets are excellent choices to cap the concerts. Ovations are expected regardless of what the quartet has chosen to play. But these works are likely, as has often been the case, to leave the audience well aware of the transcendental experience offered by great chamber works played by a great quartet.

All tickets have been claimed for each concert. A waiting queue will be established before each concert to ensure that all the nearly 800 seats are filled. The Zelazo Center is located at 2419 E. Kenwood Blvd.