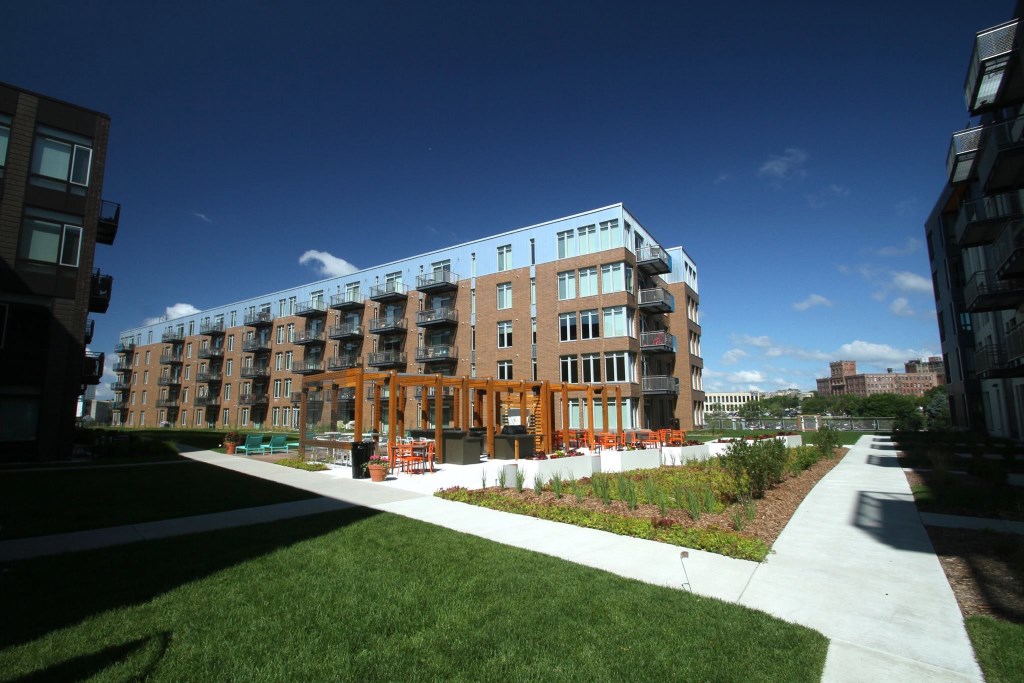 When it rains in Milwaukee, a lot of the grime that coats the streets ends up getting flushed into our local bodies of water.

The Metro Milwaukee Sewerage District (MMSD) gets most of it, and treats it. But a lot still ends up in our rivers and streams, and it brings with it all the nasty things from our streets: oil and gas spills, salt, bird and dog feces, lawn fertilizers.

MMSD has successfully caught and cleaned 98.5 percent of all stormwater and wastewater since 1994, says Bill Graffin, public information manager for MMSD. But Milwaukee’s streams, despite this feat of engineering, are still quite polluted. Some are in irreparable shape. A local non-profit that studies pollution in the river basin grades it very poorly. And while there are many variables that lead to this outcome, polluted runoff is by bar the biggest cause.

And so, for more than a decade MMSD has been offering matching funds for buildings and projects in the city to install green infrastructure that captures and cleans water where it falls. “There are a lot of willing partners,” says Karen Sands, director of planning research and sustainability, but they might lack financing “Sometimes the partners might need something of a cost-share.”

Any green infrastructure project that goes up is ultimately a net-benefit for the public. It simply decreases pollutants entering our bodies of water. And it’s sustainable. It takes a nuisance, the stormwater runoff which floods basements and pollutes our streams, and uses it as a resource. If the MMSD service area gets 1 inch of rain, that equates to roughly 7 billion gallons of water, said Graffin. “The more we can manage, the better off our rivers and Lake Michigan are going to be.”

MMSD has been providing grants to projects since 2003. Like Poblocki Paving, based in West Allis. A few years ago, the company dug up it’s concrete parking lot and put in five tanks that can hold roughly 350,000 gallons of water. Their new lot drains fallen rain into the tanks for later use in the water-intensive paving process that is Poblocki’s business.

For this year’s cycle, about $1.5 million was budgeted for the grants program. MMSD is looking for green infrastructure projects in the area to apply for matching funds. These projects can be commercial or public. And they can range from constructing wetlands to installing bioswales, from rain barrels to green gardens, porous pavement or many other options.

Polluted runoff is one of the greatest threats to our local rivers and streams. This is because it’s easier to regulate single point-sources of pollution, like an area where industry is discharging into a stream, says Sands. But it’s difficult, if not impossible to regulate a non-point source of discharge, like polluted runoff, which is all over and produced by everyone.

MMSD catches an incredible amount of stormwater and wastewater with it’s grey infrastructure, thanks to the marvel of modern engineering. But additional green infrastructure throughout the city will help add capacity to that infrastructure by storing it during a rain event, as opposed to it all hitting the system at once.

“The green infrastructure is not the magic bullet that’s gonna capture every drop of water,” Graffin cautions. At some point during a huge storm it’s going to get overwhelmed.

For example, Graffin says, to capture the largest overflow the service area has ever experienced, it would require the construction of six more deep tunnels, which are massive storage tanks that sit about 300 feet below the ground. The one Milwaukee built and brought online in 1994 is 28.5 miles long and holds 520 million gallons of water, and it cost about $1 billion.

But while green infrastructure isn’t the end all or be all, it certainly contributes to less pollution, and a more sustainable economy for the local environment. Without such interventions, when storm water gets into a sanitary sewer it gets piped to Jones Island where it’s treated with all the wastewater that comes from our kitchen sinks, toilets, etc. And when that storm water doesn’t need to be treated, but is piped in and treated anyways, that’s an unnecessary cost to taxpayers.

And projects like a roof garden can add a layer of sustainability. The garden helps extend the life of your roof by shielding it from the sun and it’s blasting UV rays. This same protective effect works in both summer and winter to help maintain temperature within the building.

So MMSD has more than a million dollars on the table. And it’s up for grabs for any well-conceived green infrastructure projects in its service area. And that money, once spent, is ultimately a favor to every citizen in the region.

2 thoughts on “Bring Us Your Green Projects, Says MMSD”