Study shows new technology could be made by area companies with state support.

By Kari Lydersen, Energy News Network - Jan 18th, 2018 12:49 pm
Get a daily rundown of the top stories on Urban Milwaukee 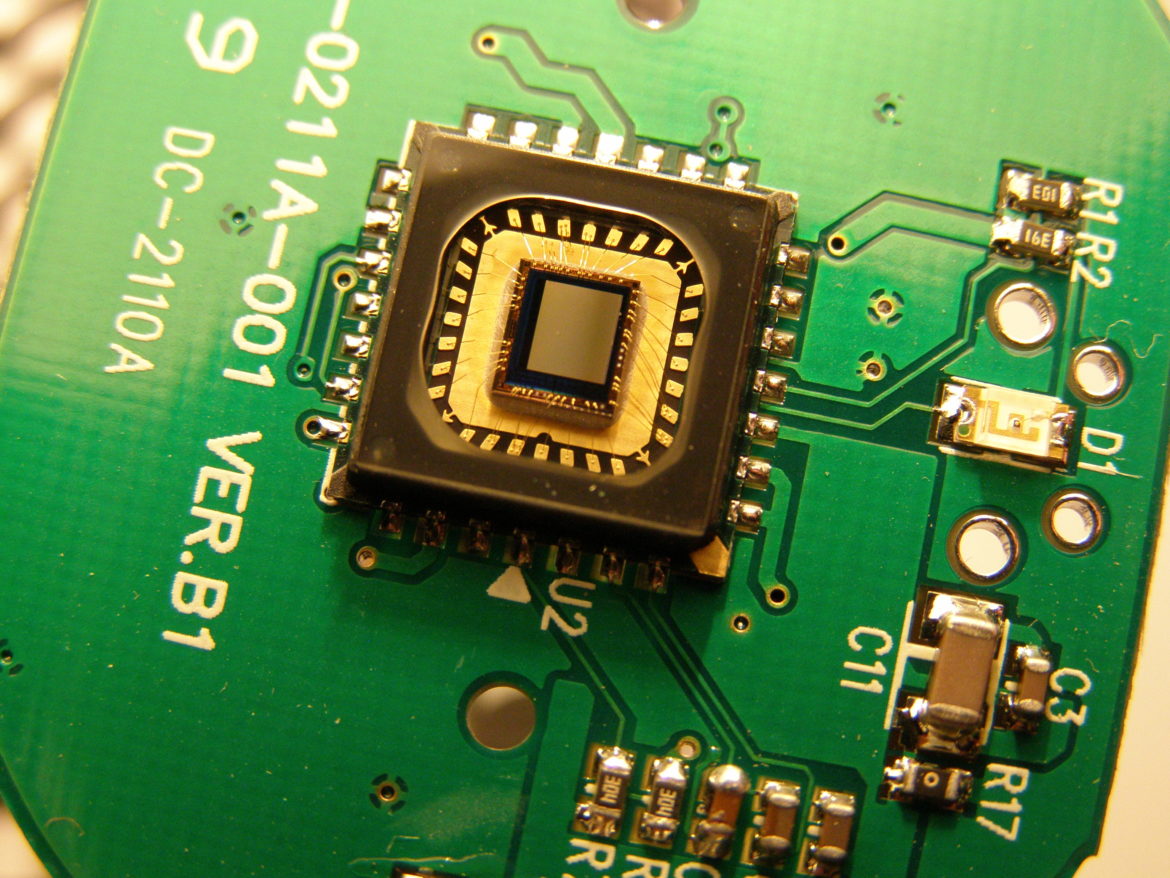 Sensor and its circuits. Photo by Jaime VD (Own work) [CC BY-SA 4.0 (https://creativecommons.org/licenses/by-sa/4.0)], via Wikimedia Commons

Wisconsin is poised to capitalize on “the biggest market opportunity of our era,” according to a report released Wednesday by the Wisconsin Energy Institute, the Midwest Energy Research Consortium and the American Jobs Project.

That would be the manufacture of sensors and controls crucial to the advanced energy economy, from smart grids and solar panels to bio-digesters and other energy-related components.

While much has been said about the potential for solar and wind supply chains to create jobs in the post-industrial Midwest, the report argues that sensors and controls are an often under-appreciated economic opportunity that could create 44,000 direct, indirect and induced jobs annually through 2030 in Wisconsin.

They say Wisconsin could be a national leader in sensors and controls, because of an existing cluster of these businesses, including Johnson Controls and Rockwell Automation; research institutions focused on such technology; and the potential for local markets related to solar, biogas, and energy efficiency to drive manufacturing.

But state elected officials, policymakers, and regulators need to take action in order for Wisconsin to realize its potential, the report says.

Among other things, the report recommends that state officials institute tax credits related to clean energy and apprenticeships; expand the state Focus on Energy conservation and clean energy program; and facilitate more distributed solar and biogas generation by clarifying policy on third-party ownership and by developing consistent net-metering standards.

Legislators and the state Public Service Commission should also push to improve the grid, the report says: “Wisconsin is one of the few Midwest states to have not conducted any legislative and regulatory action on grid modernization so far this year.”

“One of our goals is to really start a dialogue with policymakers, the Wisconsin Legislature,” said Gary Radloff, director of Midwest energy policy analysis at the Wisconsin Energy Institute. “We want to help them understand this is really an emerging sector. Advanced energy is growing worldwide, it’s a multi-billion dollar market. We just need to capture a share of that market.”

It adds that at least 9.8 million people were employed in the global controls and sensors sector in 2016, and 24 million jobs could be created by 2030.

As electronics of all types are largely manufactured overseas, it might seem countries with lower wages would be the manufacturing capitals for sensors and controls. But experts involved in the new report said that the United States and Wisconsin specifically could have an edge because of innovation happening at local universities, companies, and institutions.

“Germany is a powerhouse in manufacturing because of innovation and workforce development,” noted report co-author Mary Collins, director of the American Jobs Project, a national non-partisan think tank focused on advanced energy and manufacturing. “We’re not talking about manufacturing the widgets of the past, but really high-tech components.”

Collins said the controls and sensors sector is supposed to keep growing 7 percent per year through 2022. “So the private sector sees the writing on the wall,” she said. “It’s up to local policymakers to support that growth so that the growth translates to local communities.”

Wisconsin has several challenges in its workforce. Overall unemployment is low and the workforce is aging, meaning that companies could increasingly have trouble finding workers they need, especially as current employees retire. In fact, the report notes, 46,000 Wisconsin jobs could be unfilled by 2022.

At the same time, some Wisconsin cities and towns have significant populations of people who are underemployed or unemployed, without the skills or education to get good jobs.

The report positions sensors and controls as a solution on both fronts. The sector offers jobs good enough to lure people from other states and retain in-state talent, the authors say. And there are also positions that could be filled with a high school degree and on-the-job training, making it an option for unemployed residents including those laid off from shrinking industries in places like Milwaukee and Beloit.

Wisconsin like other Rust Belt states has lost many jobs as manufacturing automated and moved overseas. But Wisconsin maintained more of its industrial jobs, infrastructure and workforce than many other states, one of the reasons it is primed to lead on sensors and controls.

Manufacturing currently makes up about 16 percent of overall jobs in the state and pays an average of more than $68,000 a year, the report says. It notes there are already more than 200 companies in Wisconsin manufacturing sensors and controls for advanced energy systems.

While Wisconsin companies ship advanced energy components all over the world, the report argues that Wisconsin’s in-state market for sensors and controls related to renewable energy should specifically drive sales.

With many farms and dairies, Wisconsin is considered to have rich potential for developing anaerobic bio-digesters. The state has the capacity to add 1,300 new biogas operations, according to the report. And these would use a lot of new controls and sensors.

But bio-digester development has stalled in Wisconsin in part due to utility practices that make it hard for farmers to sell biogas for a profit. The report recommends a biogas voucher program that would connect biogas developers to technical resources, and a biogas equipment tax credit similar to the Investment Tax Credit that helps offset the cost of solar panels.