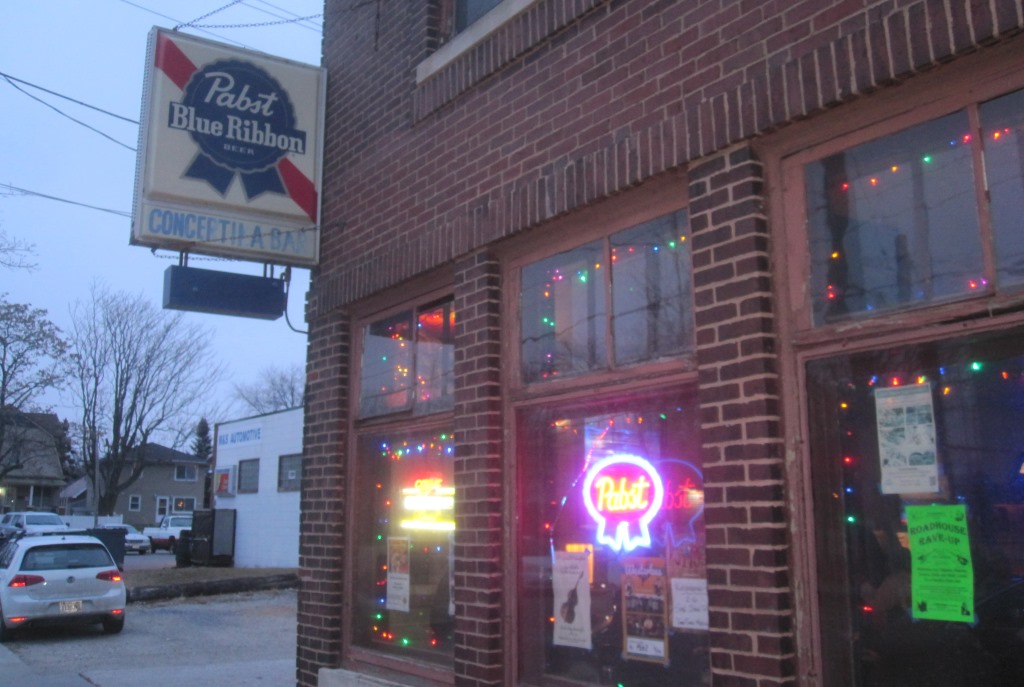 For decades, this tavern and dance hall was one of many unassuming places in the city that featured occasional live music for a mostly working class and neighborhood clientele. Such live entertainment and dancing activity, then and now, requires a special license from the city. This sets apart Kochanski’s Concertina Beer Hall from the typical rooming-house tavern of the era.

That a South Side tavern still features weekly Polka jams for an enthusiastic audience is likewise a distinction for the 2,100-square-foot tavern with a capacity of 80 located at 1920 S. 37th St., and operated under its current ownership since 2007.

Owner Andy Kochanski, (the “c” is silent), a City of Milwaukee forester, bought the place and the trademarked “Concertina Bar” name that year, largely with the intent of seeing this cultural time capsule survive for yet another generation.

Kochanski purchased the bar and business from Art Altenburg for $260,000. Altenburg, a former automobile salesman, had purchased the place back in 1980, also with the intent of preserving a rapidly disappearing slice of Milwaukee’s cultural heritage, button-box style. 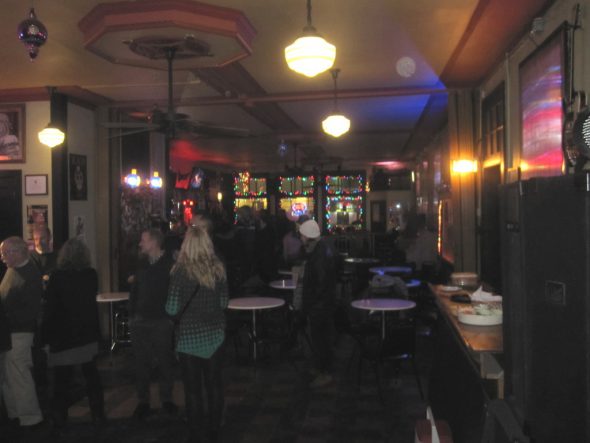 According to city records, this brick structure was built in 1900, but as we have seen in other instances, the year may simply be a place marker indicating that the building pre-dated the 20th century. Regrettably, the first page of city microfiche records for the property is missing. Likewise, the city maps of the area of 1894 and 1910 skipped over this zone on the edge of town. It is likely that this building was constructed in what was then the Town of Greenfield, and later annexed to the City of Milwaukee, which may also explain the incompleteness of its records and absence from atlases of the era.

We do know that the place then pretty much conformed to what you see today. The building sits on a corner, with the Village of West Milwaukee across S. 37th St. to the west, and an alley to the north. The northwest corner is angled, to ensure that the 34-inch-wide door does not intrude upon the public way. The tavern is 25 feet wide by 76-1/2 feet deep, and consists of a single room, with toilet rooms located on the south wall in the center of the building. The bar, also located on the south wall, is 7 feet deep and 22 feet long, and is “L” shaped, with the open end leading straight to the door of the men’s toilet room. The ceiling is a good 14 feet tall, and looks to have been renovated sometime shortly after the repeal of Prohibition. The floor, which is not much newer, is red and black linoleum tile, laid over a fine maple floor, the imprint of which has telegraphed through the surface after generations of wear from dancing feet.

This tavern first comes to our attention in 1922 when it was a licensed soft drink parlor — albeit one with a dancing permit. The dancing permit is likely a reason why this place has apparently always had a woman’s toilet. Many non-dancing taverns had no women customers, and relied on only a men’s room for convenience. And the idea of a men’s-only soft drink parlor with dancing in 1922 is too farfetched to imagine, although I would jump into a time machine in a heartbeat to witness it if I could.

It is not certain what the role of Pauline was at her husband’s club. The couple lived upstairs, which also held five sleeping rooms, accessible right from the tavern floor. Whether these rooms were rented to the industrial workers of the neighborhood on a long term basis, or perhaps for casual entertainment on a short-term basis is also a matter best left to our adventures in the time machine. But, all things considered, the setup here tips more toward bawdyhouse than rooming house, what with the music, the dancing, the ladies room and the quick route upstairs.

By 1930 the soft drinks were peddled by Stanley Bandoszewski [1885-1953]. In 1935, with liquor now legal, he sold the place in 1935 to Clarence W. Bickler [1897-1980] who lived upstairs with his wife Alice, and who knows who else. In 1940 Edmund Szymanski ran the tavern. He must have perpetuated the musical custom here, since on February 2nd, 1945, Szymanski received copyright 407265 for his unpublished composition entitled “There’s a Love Still Burning in My Heart.”

By 1950 we find Edward Woloszynek and his wife Sophia E. Woloszynek here. The household included his mother Julia (by then the widow of Mateusz) and their children. The family presumably filled the second floor while Ed operated the tavern below as the Parakeet, as it was to remain for three postwar decades.

The Parakeet Tap continued the musical and dancing tradition of the bar in Milwaukee’s working class glory days of full employment with good union wages and jobs virtually guaranteed for life.

But in 1957, the music nearly stopped, as City Hall flexed its muscles to enforce a building code provision.

A Department of Building Inspection and Safety Notice dated August 13, 1957 arrived at the tavern’s door, addressed to “Ed Woloszynek, owner.”

The 1957-1958 Public dance hall application will not be approved by this department … until such time as this notice has been fully complied with.

Ed and his contractor buddies provided both interior basement stairways with the required fire-preventive measure, and the band played on. The place had a Pabst sign hanging on the corner by 1959, at which time an “OPEN” sign was hung below it. (The current sign dates to May, 1963.)

Ed’s woes were not over. The city found another way to threaten the dance hall license. Also in May, 1963, a pencil-pushing bureaucrat with a knack for geometry and simple mathematics went over a copy of the building’s plan, doing some calculations. After making allowance for such extraneous features as the ladies toilet room (“19 s.f.”), it was determined that the net area of the premises was 1,036.30 s.f.. The required area for a tavern dance hall was 1,500 s.f. Therefore, the Parakeet Tap was “463.70 square feet SHORT.”

Woloszynek filed an appeal, and the polkas kept playing.

From Rooming House to Union Hall

Somewhere around this time, Woloszynek found a use for the rooms above the tavern. They would be quite well suited, he figured, to serve as offices and meeting rooms for various unions. The second floor occupants included:

Local 1778, for example, rented an “upper floor 12′ x 15′ room. Union Business – films, etc. Office,” the assessor noted.  “One second class living unit” remained, the Assessor noted. The Union Locals, the companies that employed the workers, and in some cases the trades themselves, are now all gone.

In 1976, on a return visit, the assessor found little to cheer him — or to assess. “Owner operates tavern and occ. entire bldg. Very old bldg — needs maint. and repointing.”

On August 3rd, 1979, after over three decades, Ed decided to call it quits, and had his real estate agent compose an advertisement to sell the place, leaving the “maint. and repointing” to another. “Well established bar business in industrial area. Seller retiring. 5 unions have meeting rooms on second floor their annual rent is approx $10,000. Some have 10 year lease. Price $79,000.”

On June 1st, 1980, a former car salesman named Arthur Lawrence Altenburg signed a land contract with Woloszynek to purchase the building for $23,333. (The $79,000 asking price presumably included the business, fixtures, inventory, etc.) The assessor came by a couple months later. “Bought direct from seller. Overall ave. cond. for age. No modernization,” he noted.

A return visit in 1990 clearly disappointed the assessor, whose statutory duties oblige him to “Discover, List and Value” property. ”

“Bar area has not been updated. Rooms on second flr. have no commercial value or use. Originally this was a boarding house. The two small rooms the Boiler Makers union rent are used sporadically and are not desirable. The second floor is a ‘White Elephant.'”

Altenburg was conscious that he was at the helm of a unique cultural institution, and promoted his place relentlessly.

He promptly christened the place as “Art Altenburg’s Bar ‘The Only Concertina Bar in the U.S.A.'”

He printed bumper stickers with this legend by the thousands, and told all and sundry that his clever marketing instincts obliged him to trademark the name, lest the nation be flooded with imitators. He eventually did so in 1998. (The trademark lapsed on July 24th, 2010; it’s yours if you want it.)

Altenburg continued the musical and social traditions of the place, as the final members of the postwar union era waltzed off into the sunset. He made minor changes here and there, including removing one stairway to the second floor, replacing it with a “Class ‘A’ Fire Escape” on the south wall, and adding a pass through window and ventilation equipment to the 8 ft. by 12-1/2 ft. kitchen in the southeast corner. There was a sign behind the bar that read “If Your Wife Calls and You’re Not Here — U Tell Her.”

A Polka Bar for the 21st Century 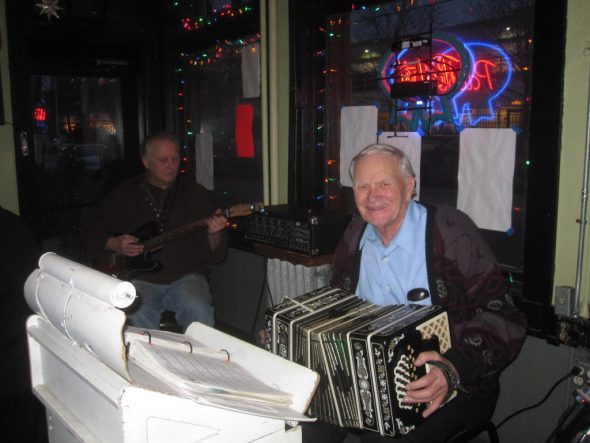 After 27 years of operating this remarkable survivor, Altenburg put the place up for sale in 2007, finding a purchaser in the present owner, Andy Kochanski, who paid $260,000 for the building. (Kochanski was 10 years old when Altennburg bought the place.) Once again the tavern’s musical traditions were to be preserved — but with a 21st century touch.

There is still the Wednesday Evening Polka Jam, starting at 7 p.m., and, on a Sunday afternoon, music is also known to spontaneously erupt from the raised bandstand at the front window, separated from the dance floor by a simple iron rail. Yet polka alone does not pay all the bills, Kochanski has learned. (In most cities, polka doesn’t pay any of the bills.) So, while one week might feature the Muller Fasching Verein Milwaukee, with its Schnapps-based antics, the next might feature Groove Epidemic, “an original riff-rock band heavy on deep wicked grooves, catchy hooks & sick moods.”

Kochanski’s continues its traditions, and that includes a Christmas tree hung upside down from the ceiling, just like in Old Polonia. An oak spinnet piano is bedecked with business cards and curios like a ceramic boy playing a concertina. Next to him is a genuine accordion, red and sparkly, and itching to be played. In front of him is a cribbage board, also itching to be played. A deck of cards atop it will facilitate such a move. An old telephone booth, bereft of a telephone, takes up space in a quaint way, while the sounds of polka sweetly fill the air. A glimpse outside shows the large beer garden with three telephone poles in the middle, and a number of significant landscape improvements visible, even in January, thanks to the efforts of the industrious Kochanski, a fine custodian of Milwaukee’s fabulous musical and social heritage. 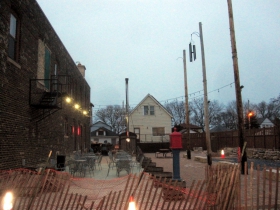 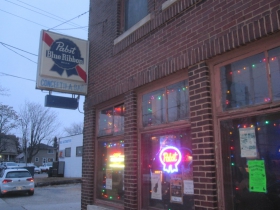 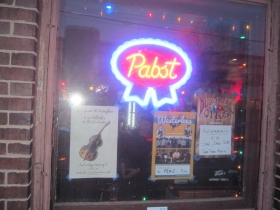 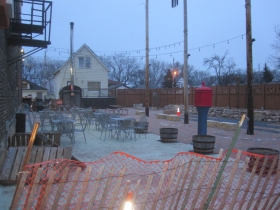 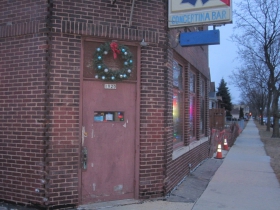 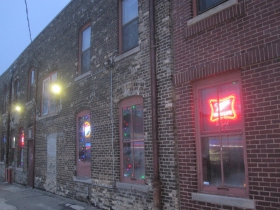