Population up 21%, traffic down 3.3%, due to good transit. Can Milwaukee learn from this? 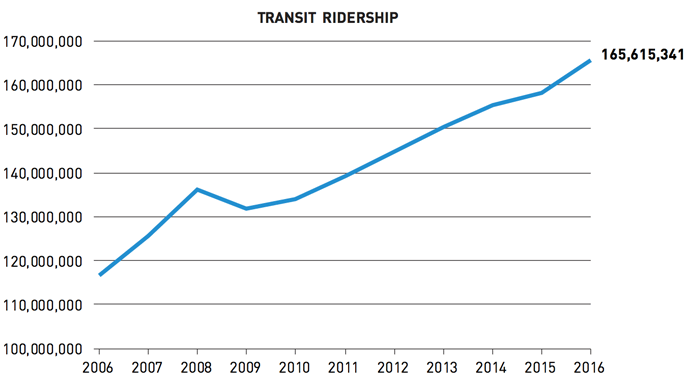 Seattle is showing other American cities how transit can help a growing population get around without an increase in car traffic.

The city is growing at a fast pace: Seattle added about 20,000 new residents in 2016, a population increase of about 3 percent. But traffic volumes didn’t increase at all. Driving mileage stayed flat in 2016, Seattle City Traffic Engineer Dongho Chang reports on Twitter.

The longer-term story is, if anything, even more compelling. Seattle’s population has grown 21 percent since 2006, and vehicle mileage has fallen 3.3 percent over the same period, Chang reports. Meanwhile, transit ridership grew 41.8 percent. 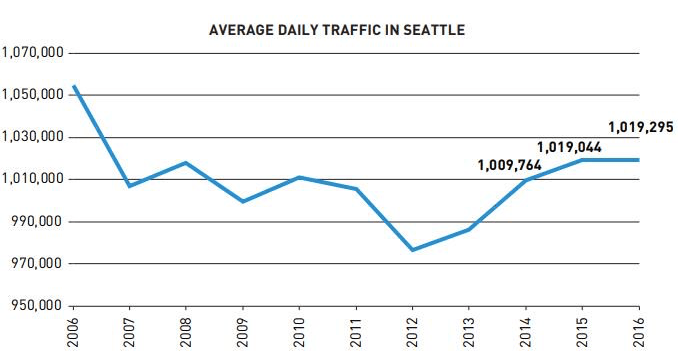 Using transit to absorb the growth of residents and jobs is a feat few peer cities have been able to achieve in the U.S. While transit ridership keeps growing in Seattle, it is stagnating in other cities that spent big on rail transit, like Los Angeles and Denver.

Importantly, Seattle has invested in bus service at the same time as the city pursues rail expansions. King County Metro was facing potential bus cuts due to a budget shortfall in 2014. Rather than accept worse service, Seattle voters added a $60 vehicle registration fee and increased the sales tax by 0.1 percent. The money was used to improve service and increase frequency across the system, especially on the most-used routes. 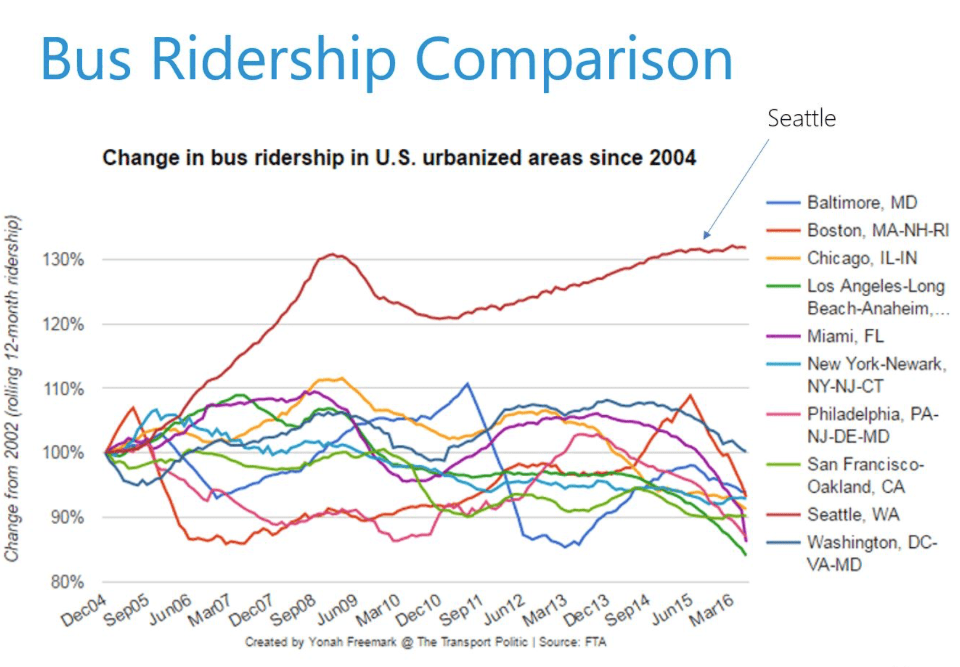 The Milwaukee County Transit System has seen its ridership plummet, from more than 62 million in 2000 to about 40 million in 2014, a Public Policy Forum study found, and the system’s annual report shows ridership was just over 40 million in 2016. Under former Milwaukee County Executive Scott Walker, funding for the system was steadily cut, along with the number of routes and frequency of rides. To help prevent further declines due to cuts in state transportation funding, Milwaukee County Executive Chris Abele proposed an increase in the county wheel tax or vehicle registration fee, but the county board, led by board chair Theo Lipscomb, voted against the proposal.

The reward for Seattle from spending more on transit can be seen in pattern of shifting travel habits among downtown workers: Transit commuting is on the rise while car commuting is not.

The share of downtown Seattle workers commuting by car dropped from 35 percent to 30 percent since 2010. Seattle’s downtown added 45,000 workers over that period, with 95 percent of the new trips were absorbed by transit, walking, biking or carpooling, according to the local non-profit Commute Seattle.

Earlier this year, Streetfilms and TransitCenter looked at how Seattle’s investments in bus and rail service set the stage for this transition:

Seattle’s continuing growth in transit ridership is a credit to the leadership of public officials like Dongho Chang, as well as voters’ willingness to pay for better transit. Other cities should be taking notes.