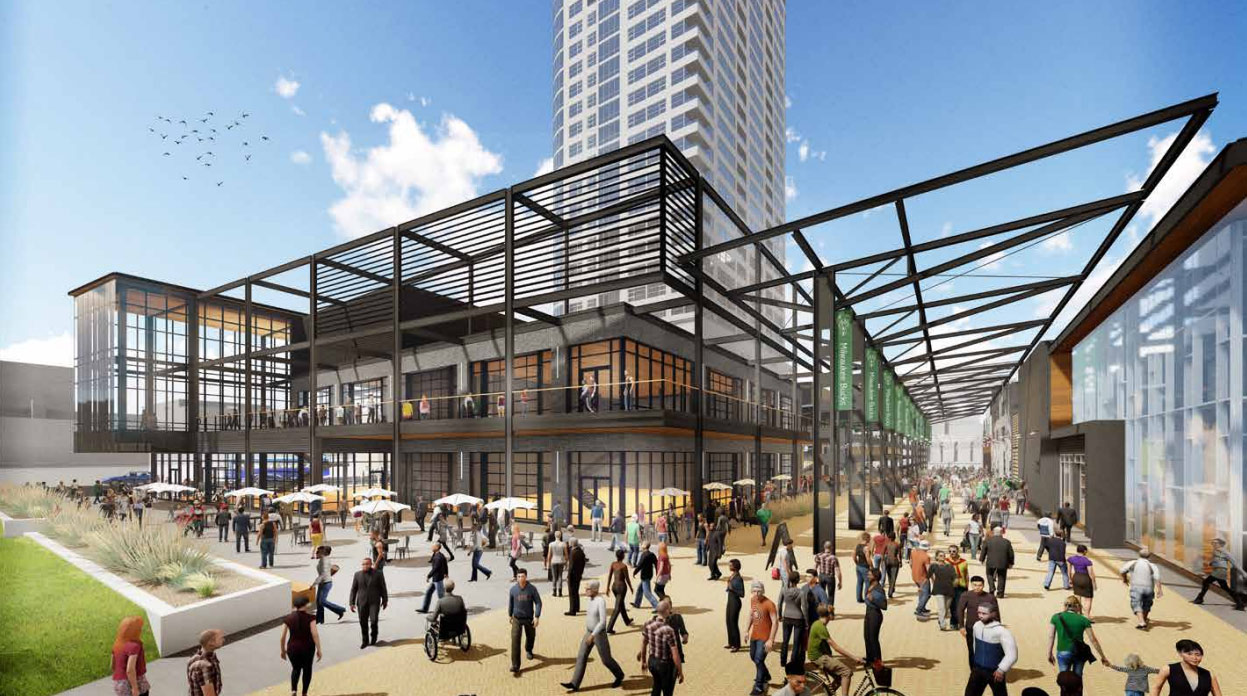 The Milwaukee Bucks are modifying their plans for the “Live Block” entertainment center associated with the new arena. The three-building complex is intended to facilitate a connection between the arena, new plaza and nearby Old World Third Street entertainment district. The complex is planned to include a number of commercial spaces for bars and restaurants oriented around a series of pedestrian pathways and the large plaza.

The biggest change presented by the team’s project architect, Rinka Chung Architecture, is a reduction in the height and size of the northern most building in the complex. The Bucks reduced its size after meeting with a number of prospective tenants. Team vice president Alex Lasry said that the team hopes to announce tenants after the new year. “Things just start to slow down as we get closer to the holiday,” Lasry told the committee. 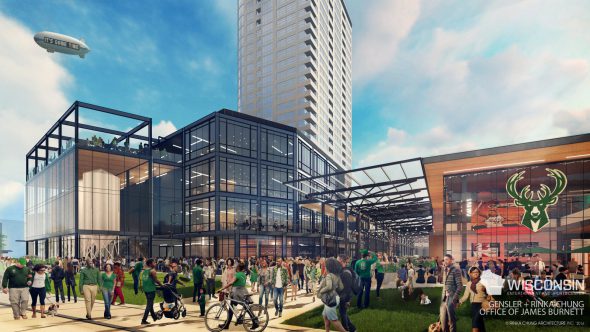 Lasry did clarify that the building’s downsizing won’t reduce the number of tenants in the building. “We are not lowering the amount of floors in the building because of potential tenant interest. We actually had very robust interest in this building and are close to being able to sign a lease for it.”

Lasry and architect Matt Rinka tell Urban Milwaukee that the new design has also eliminated a performance space on the third and fourth floors. The potential tenants they’re engaging don’t require such a space. The change reduces the building in size from 53,950 square feet to 26,126 square feet. But with that change, the design of the building has been modified to maintain the height as much as possible, reducing the height by only 10 feet. “We want to keep that kind of urban feel and keep that height,” Lasry said.

The changes drew the support of the committee. Alderman Nik Kovac said “I think it’s better.” Kovac asked about the changes in the design, which moves a large glassy atrium, rendered with brew kettles, from facing west to facing north along W. Juneau Ave. This change expands the plaza and makes it more inviting for visitors from the north.

Rinka Chung project director Audry Grill told the committee “We feel that it’s just better urban design principles in terms of the clarity of the entries and the flow around the elements.” She noted the revised plan now includes more outdoor balcony space overlooking the plaza. The relocation of the space envisioned for kettles also expands on the permeability of the buildings, enhancing the indoor-outdoor connection between the plaza and buildings.

Committee chair Jim Bohl said “I actually think that in some ways this was a blessing in disguise.” Bohl praised the move to add more green space to the plaza and encouraged more of it.

Both Kovac and Bohl pushed for a water feature to be included with the plaza. Lasry told the committee its something they’re looking to include. “A water feature that is actually usable is a great way to bring families down, especially during the day,” Lasry said.

At the City Plan Commission hearing on the matter, team consultant Blair Williams told the commissioners “We think it’s a very symbiotic process between the buildings and the plaza.” He said the team intends to have “substantial” programming on the plaza, which along with the tenants in the Live Block will drive interest to the space outside of when the arena is being used.

A farmers market is among many possible uses for the space, with Williams noting they’re exploring all the requirements to accommodate one, including power outlets and mounting infrastructure.

The committee unanimously approved the changes. The proposed change must next go before the entire Common Council.

These changes come after the team recently secured approval for a connector piece to link the entertainment complex with N. Old World Third St. The team owns lots on both sides of Ugly’s Pub on 1125 N. Old World Third St., and has plans to turn the northernmost lot into a beer garden and public alley. Plans have yet to be released for the southern lot.