Ka-Bobs Is a Bargain Bistro

West Allis eatery has big menu but the juicy kabobs stand out for price and taste. 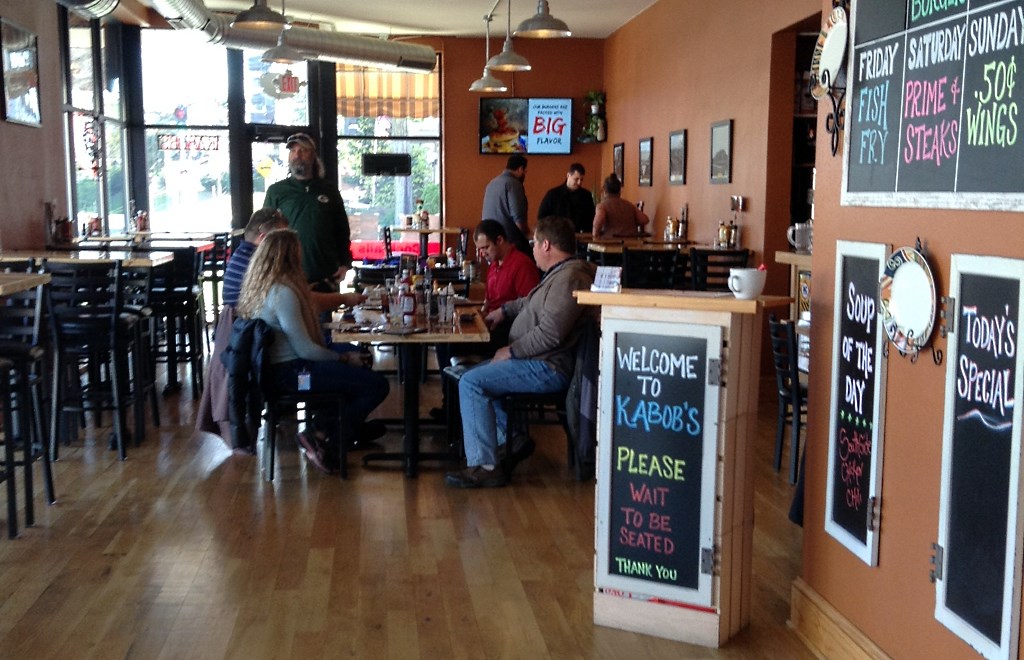 After a quick look at the menu at Ka-Bobs, you will know this is not a Greek restaurant, as the name might suggest. In fact, it’s anything but. Owner Bob Nicholson says “it’s just a play on words,” on his first name.

But the menu, true to its name, also features six different kabobs, and Nicholson nails the art of skewered meats. After two visits, friends and I had sampled each of the kabobs, a variety that includes beef, chicken, shrimp, and veggies, each accompanied by a special sauce. The B&B, slices of New York strip, interwoven with Nueske’s bacon, had so much beefy flavor they didn’t need the bbq sauce. “The meat tastes like filet,” my friend said, “and it’s even more tender and juicy from the bacon.” It came with a side, a large portion of roasted veggies, carrots, onions, asparagus, and potatoes. Other side choices include, house made chips, fries, rice, and a side seldom seen on a menu, grilled pineapple.

The Chicken Satay Ka-bob had an Asian twist from the spicy peanut sauce. Nicholson told us he makes it spicy with ground red pepper and Sriracha. He explained that he wants to give his customers the heat, without overwhelming the flavor of the grilled chicken. Like the New York strip, the chicken was almost impossibly juicy.

From the Triple Threat kabob, we sampled the Veggie, the Ribs on a Stick, and the Cajun Shrimp. I need to pause here to say, you can anticipate every kabob on the menu will be a humongous plate of food, quantity combined with unabridged quality.

The chef paired the Cajun Grilled Shrimp with garlic butter; the ribs had such deep meaty flavor that the citrus bbq sauce seemed almost superfluous; the veggies grilled to crunchy deliciousness also came with a garlic-flavored sauce.

On a second visit, we arrived mid afternoon on a Sunday to find the restaurant almost full, with a TV on the wall turned to football, though no one appeared to be watching.

Ka-Bobs is a bright inviting space, with a few four tops and many high tops that face large windows on Becher and 68th Street. It has a fresh, uncluttered look that will appeal to families from the surrounding neighborhood, as well as sports fans who want to watch the TV in the bar area, and people like us, who come for the food. It’s located in West Allis in an area with more single family homes than businesses.

We were too late on one visit for brunch and the Sunday Omelet Bar, so we ordered the other Sunday Special, 50 cent wings. If you’re a wing person, these wings will confirm everything you like about that oft-overlooked part of the bird. Nicholson marinates them for 24 hours, then deep-fries them for crunch, and serves them with a choice of five sauces. The wings tossed with garlic-parmesan sauce needed only a napkin, while the naked wings came to life in the blue cheese dipping sauce. 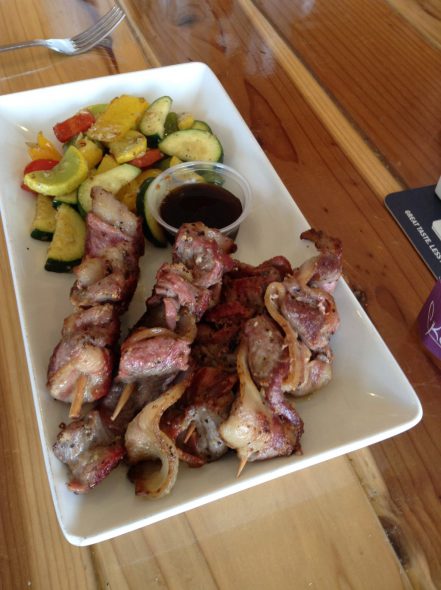 The B&B. Photo by Cari Taylor-Carlson.

From Teasers, the Texas Flat Bread Pizza easily serves one as a meal, or two or three as an appetizer. It had a cracker-like crust, thin, yet sturdy enough to support a layer of smoked brisket and caramelized onions brushed with white cheddar sauce.

There’s more of that smoked brisket in the Bolo Brisket Wrap, a “Handheld,” where the meat is stretched around caramelized onions, smoked cheddar, wild mushrooms and more of that white cheddar sauce. The wrap that holds it together is a veggie tortilla wrap, a thin sheath which keeps the focus on the filling, not the packaging.

The Skillet Mac and Cheese fills a cast iron skillet, a three cheese sauce mixed with cavatapi pasta, Andouille sausage, and some pork belly. It adds calories and flavor to a this dish which could easily serve two or three.

The Pork Mignon, with a red pepper sauce, had good flavor, but wasn’t consistently tender. Some bites were more challenging than others, however the roasted carrots, asparagus, and potatoes were flawless.

Nothing on the menu, except Twin Peaks, at $18.00, costs more than $16.00, and that includes those meaty kabobs, which range from $10 to $13. Like the mac and cheese, the entrees reflect the best of classic comfort foods. For meat lovers, Twin Peaks sits on top of the mountain. Two tenderloin medallions, each perched on a mix of roasted veggies, if separated, could easily feed two. Because the tenderloin, almost fork-tender, had so much flavor, we had to ask Nicholson where he buys his meat. “Robert’s Specialty Meats in Waukesha,” he said.

If you come on a Wednesday, you can Build Your Own Burger, although it would be hard to improve on the Becher Burger — smoked bacon, provolone, jack cheese, jalapeno, straw onions, and Kabob sauce, all somehow balanced on a toasted bun. Thursday brings the All You Can Eat Pasta Bar. On Friday they serve a fish fry, and if you come on a weekend in time for brunch, you can order Eggs Benedict on flatbread, battered cranberry bread French Toast, or house-made honey sweet biscuits with sausage gravy and two eggs.

You will also find soup and salad on the menu at Kabobs, and of course dessert, as evidenced by the slice of tart Lemon Meringue Pie which I took home to enjoy later. 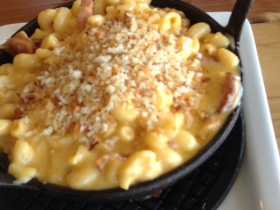 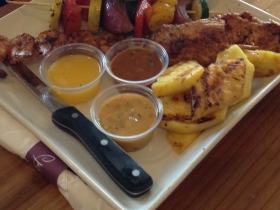 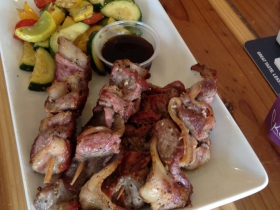 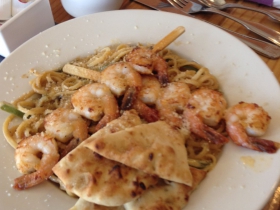 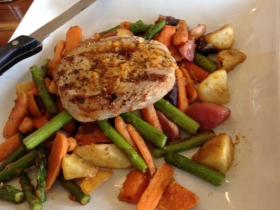 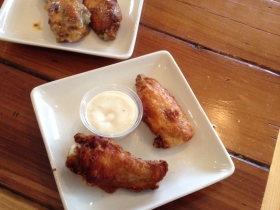 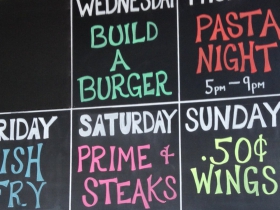 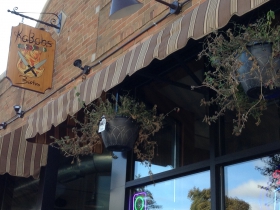 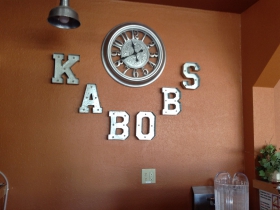 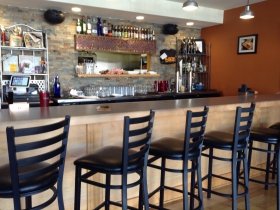 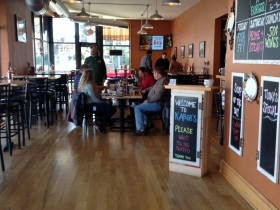 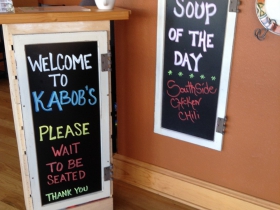