$7 million invested over 11 years has leveraged an additional $176 million in spending. 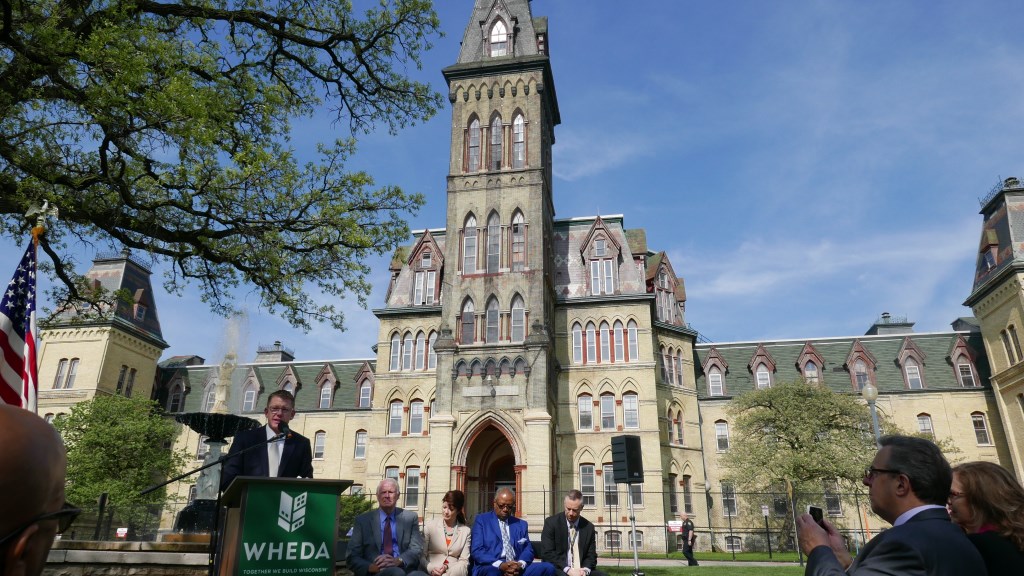 In May, $1.4 million in low-income housing tax credits were awarded for the redevelopment of the 1860s “Old Main” building. Photo by Graham Kilmer.

The City of Milwaukee’s Housing Trust Fund has awarded $600,000 this year to various housing projects throughout the city aimed at curbing homelessness among veterans and providing secure housing for low income residents, Ald. Michael Murphy announced at a press conference held yesterday.

For 11 years the trust fund has been providing financial support to projects around the city. The public money is usually the last in on a lot of these projects, Murphy said, but it provides a surety for other investors that allows them to leverage capital for their projects at a rate of roughly $25 for every dollar the city puts in.

Kalan Haywood, Sr., a member of the advisory board and the founder and president of Vanguard Group LLC, said the city takes “this small pot of funds” and leverages hundreds of millions of dollars for housing in “buildings that are often forgotten about” and for people “that are often overlooked.”

In the 11 years since the fund was started, it has doled out roughly $7.1 million, which has in turn leveraged $176.3 million in funds for 1,094 housing units. This year the fund provided $600,000 to projects creating 140 units of affordable housing.

A major initiative, and one that has become a showpiece for the city’s affordable and veterans housing initiatives, is The Milwaukee Soldier’s Home project, a redevelopment of the “Old Main” building on the Clement J. Zablocki Medical Center grounds.

Original development of the “Old Main” started after President Abraham Lincoln signed legislation in 1865 establishing soldiers homes across the country. Milwaukee’s soldiers home came about after women in the city began fundraising for it, eventually raising $100,000, the equivalent of millions in today’s dollars, back in the 1860s.

Some 150 years later, the city housing trust fund provided $150,000 to the soldiers home for the $40 million two-phase redevelopment effort by Alexander Company on the medical center grounds. The project is also using a smorgasbord of low-income housing tax credits, and state and federal historic preservation credits in order to provide 80 units of supportive housing for veterans and their families.

“To be able to use funds from our housing trust fund to really implement a plan that I think is humane, economically smart, historically smart from a preservation standpoint, it really goes a long way,” said Mayor Tom Barrett.

The trust fund has also awarded $80,000 in forgivable loans for up to 16 low-income units in the Washington Park Neighborhood Improvement District, to assist with crucial repairs. And $40,000 to Gibraltar Development of Milwaukee Corporation for a new roofing system and other needs.

A Walker’s Point project called 704 Place Apartments received the largest check from the trust fund at $210,000, to help construction of 60 units for low-income residents. This project is also focusing on providing housing to veterans and those at risk of becoming homeless.

“This amount of money that we’re using, will help make a difference,” Murphy said. “Instead of seeing a veteran living underneath a bridge, we’re gonna see them living in a safe affordable place where they get roundabout care looking out for their interests.”