But Health Department leaders contend it doesn't really change how they operate.

By Jabril Faraj, Milwaukee Neighborhood News Service - Dec 5th, 2017 09:37 am
Get a daily rundown of the top stories on Urban Milwaukee 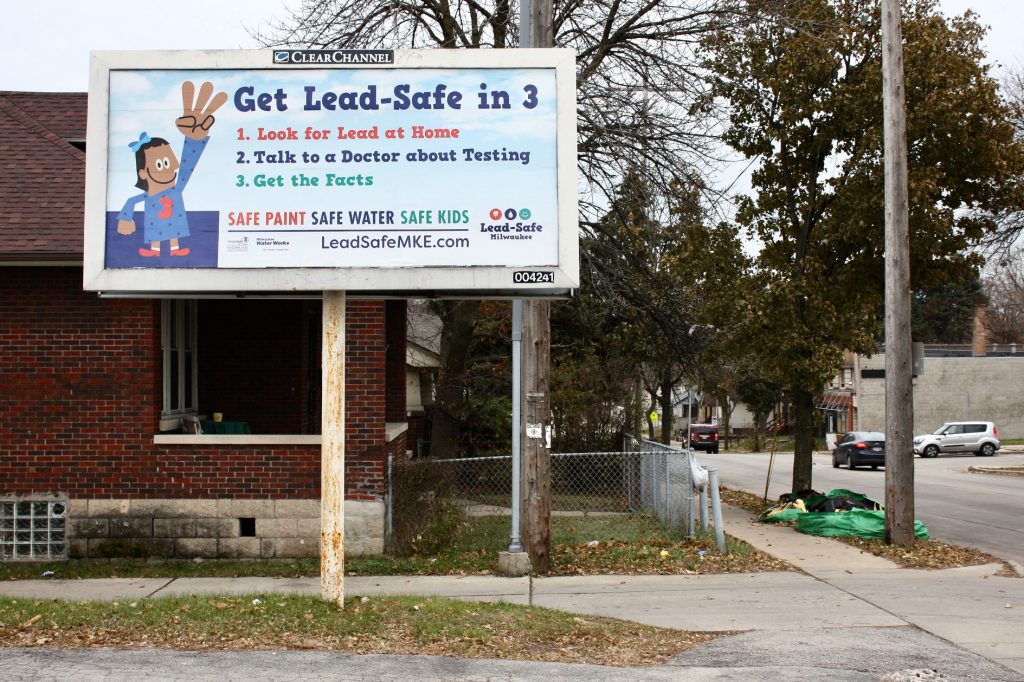 A billboard near North 5th Street and West Keefe Avenue is intended to raise awareness about lead exposure. Photo by Jabril Faraj.

A resolution passed by the Common Council unanimously last Tuesday will change the recommendations of the Milwaukee Health Department as it relates to lead exposure and safety.

The resolution beefs up existing recommendations regarding who is at risk for lead exposure and how early and often children should be tested. It also clarifies the most effective means to protect people from lead in water.

Prior to the resolution’s passage, the Health Department (MHD) considered children under 6 and pregnant or breastfeeding women to be at risk from lead exposure; the resolution adds women of childbearing age (15-45) to that pool.

Previously MHD followed guidance from the Wisconsin Department of Health Services regarding how often young children should be tested for lead exposure. DHS recommends children be tested three times before the age of 3 and children under 6 be tested if they have had no prior tests, or have a history of lead exposure or high risk of exposure. The resolution directs health providers to test “infants and children up to the age of 6” at least once a year. It also recommends a NSF/ANSI Standard 53 certified filter, which removes 99 percent of lead, as “the most thorough means of lead-water safety.” 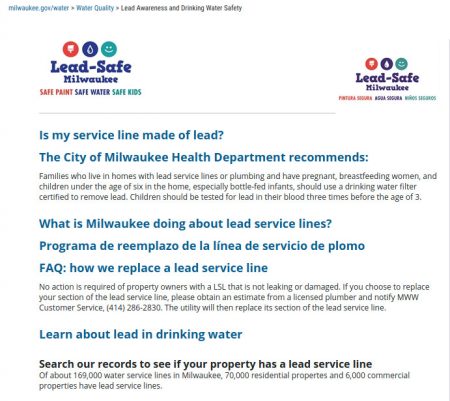 This screenshot of a Milwaukee Water Works Web page, taken Dec. 1, 2017, makes no mention of the need for “women of childbearing age who may become pregnant” to use water filters if their home has a lead service line.

The resolution, which awaits the signature of Mayor Tom Barrett, is expected to be signed in the coming days, according to his special assistant, Jodie Tabak.

“It took eight months and 11 names, but we finally came up with a resolution,” said Hunger Task Force Executive Director Sherrie Tussler, referring to the different versions of the measure.

The resolution, originally introduced in May by Ald. Tony Zielinski, was opposed by the Health Department because, as Health Commissioner Bevan Baker wrote, it was “in conflict with current evidence-based research.” The initial version stated that at-risk groups should not drink any unfiltered water, even in homes without a lead service line.

“We obviously pushed the city and the Health Department forward, in terms of adding more teeth and, I think … a greater level of safety,” said Ald. Jim Bohl, who chaired the city’s Water Quality Task Force and was a sponsor of the resolution.

Though Tussler and Robert Miranda, spokesperson for the Freshwater for Life Action Coalition (FLAC), a local advocacy group on the lead water issue, said much more needs to be done, they called the move a step forward.

But Health Department officials are claiming the resolution will have no effect on its filter distribution efforts or guidance to care providers regarding testing.

At an Oct. 6 Public Safety and Health Committee meeting, Health Commissioner Bevan Baker, referring to the practice of providing filters to women of childbearing age who live in a home with a lead service line, said, “We’ve been doing that for the whole filter distribution campaign.” The campaign, which provides free filters through community partners, began in 2016.

In response to emailed questions last week, after the resolution passed, Director of Disease Control & Environmental Health Angela Hagy wrote, “Our recommendation for filter use includes women within that age group (15-45) who may become pregnant. We support that, and our filter distribution program included this population prior to the resolution. Therefore, there is no change in those efforts.”

“It’s a matter of record to the contrary,” said Zielinski, who announced Wednesday that he is running for mayor in 2020.

A May 8 letter, signed by Baker, that opposed the original resolution said a filter is recommended “if the household is at risk for lead in drinking water and is home to children under the age of 6, or pregnant or breastfeeding women.” It made no reference to women of childbearing age. It also promoted flushing faucets for three minutes as “a cost-effective and accessible” way to protect from lead exposure. Research has shown flushing to be an inconsistent method of protection.

Tussler said, “I think what they’re trying to do, at this point, is claim, on some levels, they’ve been doing the work all along,” adding that the Health Department’s website and messaging around lead in water, has “morphed” during the battle over the resolution.

Screenshots taken by the Hunger Task Force over the course of about five months show that, in July, MHD’s Lead Safe MKE campaign recommended people living in homes that have lead lines “run your water if it hasn’t been used in several hours.” By early September, filtering was recommended for “families with pregnant or breastfeeding women and children under 6.”

Bohl said the new recommendations, outlined in the recently passed resolution, are in line with the Water Quality Task Force’s report, issued in April. The report prioritized the use of water filters as “the most thorough means of lead-water safety” and supported — at the urging of Black Health Coalition of Wisconsin President Patricia McManus — including women of childbearing age in the group that should use filters if their home has a lead line. 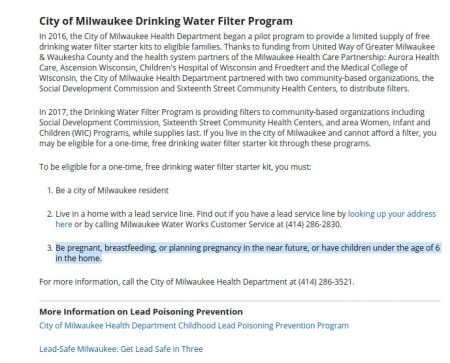 As of Dec. 3 at 10:30 p.m., the Milwaukee Health Department’s drinking water filter program Web page said that, to be eligible for a free water filter, Milwaukee residents must have a lead service line and be “pregnant, breastfeeding, or planning pregnancy in the near future, or have children under the age of 6.”

The measure to expand the at-risk group was supported by Baker at the time but the guidance was not added as an official Health Department recommendation. MHD pointed Milwaukee Neighborhood News Service to a document from October 2016 that outlines the pilot distribution program. The document mentions women of childbearing age as a target for filter distribution; however, MHD never specifically warned or recommended publicly that women of childbearing age use filters.

The document does not appear on the Health Department’s drinking water filter program page, which says only City of Milwaukee residents who have a lead service line and are “pregnant, breastfeeding, or planning pregnancy in the near future, or have children under the age of 6” are eligible for a free filter.

Online MHD resources — including Web pages focused on lead exposure, what parents can do to protect their children and the drinking water filter program — make no mention of women of childbearing age as being at risk, or needing filters. A Milwaukee Water Works page associated with Lead Safe MKE did not include such language as recently as Dec. 1, but has since been changed.

The Social Development Commission (SDC) is one of the organizations partnering with the Health Department to distribute free filters. SDC has distributed about 600 filters since 2016 through local clinics and at the organization’s North Side location.

According to Greg DiSalvo, who works in SDC’s residential services division, anyone with a lead service line is eligible for a filter, per direction of the Health Department. However, he noted that in April or May the Health Department provided further direction to target distribution to children under 6 and pregnant women. When asked whether women of childbearing age had been added to the targeted list, he said, “I have not heard anything in regards to that, no.”

Baker has said in the past that it does not make sense to supply households with no at-risk individuals with filters, because it would deplete resources that could supply filters to those who are most at risk.

Health Department officials declined to answer questions about the timeline for rolling out changes in messaging mandated by the resolution. MHD did not grant a request to interview Baker for this story.

“There’s been a lot of mixed messages and I think that we need to clarify the message that there’s lead in our water when it comes through lead pipes … and the best thing you can do is to put a filter on your faucet,” said Kirsten Shead, co-chair of Milwaukee Water Commons’ drinking water initiative.

Advocates expressed a desire to work with the Health Department and said it is essential that community organizations, activists and the city work together to make sure children are safe. But, according to Tussler, leadership is lacking and “we’re too busy quibbling about who’s responsible.”

Tussler, Miranda and Shead all said they will continue to advocate for more resources to be dedicated to lead awareness, testing, education and replacing hazardous infrastructure.

But Tussler said, “It sounds like we’re going to have an uphill battle.”