Each year a city resident donates a spruce for City Hall. Here's the home of 2017's winner. 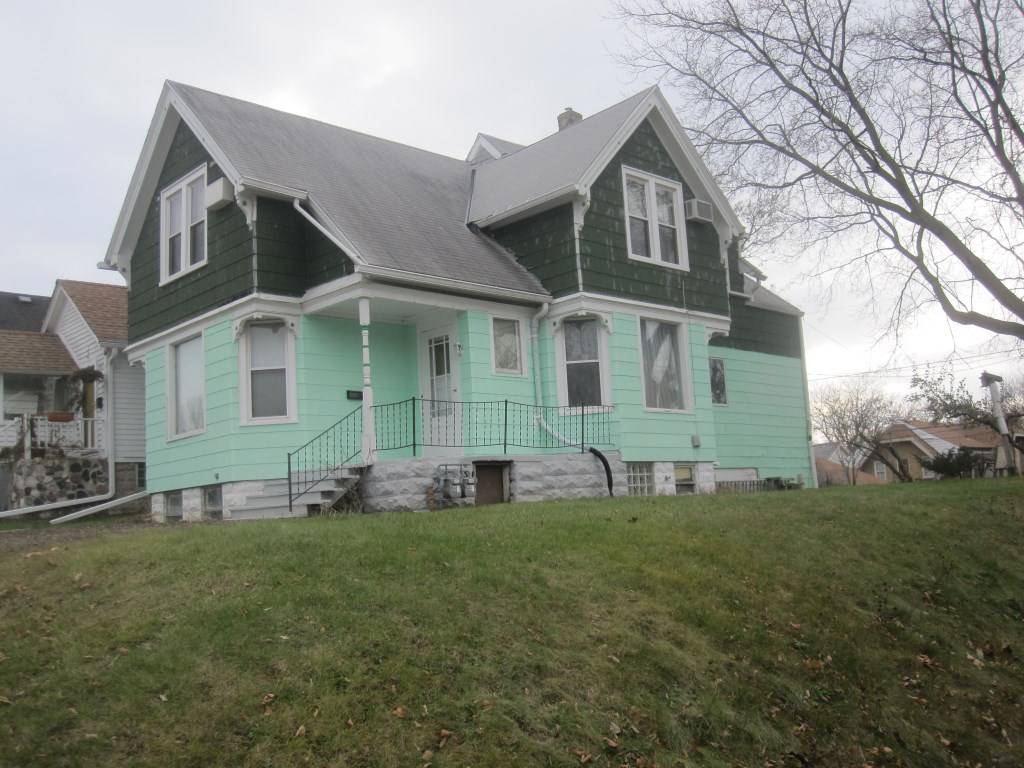 Since 1913 the City of Milwaukee has decorated an official tree for the holidays, illuminating the conifer in a community ceremony with great pageantry and celebration. It is one of the oldest such municipal celebrations in America.

It is also remarkably democratic, in more ways than one, including the selection of the tree.

Every autumn since 1981 the City of Milwaukee Department of Public Works (DPW) Forestry Division puts out a call for residents willing to nominate a 30-to-40-foot spruce tree growing in their yard suitable to serve as the official Christmas Tree.

Competition for the honor is stiff — some donors have waited years for their tree to be chosen. Others have lucked out and have donated more than one tree over the years. In 2008, the tree broke in transport. Once stitched together with clamps and chains, the contorted conifer was the subject of ridicule from a bevy of malevolent Scrooges.

This year, the 104th annual tree was donated by one Thomas J. Scannell, whose 32-foot Colorado Blue Spruce, planted 30 years ago by a previous resident of his Muskego Way neighborhood home, beat out other contestants for the honor. This pleased his mother, Elizabeth Hipp, who has long been a fan of the Christmas Tree Lighting Ceremony, which was held Thursday, November 16th at City Hall. She and her son had the honor of flipping the switch to illuminate the evergreen, which reaches as high as the windows of the mayor’s office in the Great Hall of the People, which it fronts.

A City of Spruce Trees

A remarkable thing about the annual coniferous ritual is that the trees selected tend to come from all quarters of the city, from neighborhoods rich and poor, and from donors of a wide variety of ethnic heritages. There is no discrete Evergreen District here. While the Muskego Way neighborhood, near S. Layton Boulevard and W. Mitchell St., provided this year’s spruce, previous trees this decade were grown in the Cooper Park, Hawley Farms, Tripoli Park and Old North Milwaukee neighborhoods. Few other than residents have ever heard of these places which tend to be somewhat on the outskirts, closer to the city line than to City Hall. The lots in these neighborhoods might be somewhat larger than those in the heart of the city, (this one’s about a fifth of an acre) but are nevertheless hardly of the estate size that the species demands to reach its full magnificence. The spruce is a park tree, not a street tree. But few realize this, until the tree takes over and they beg the city to haul it away.

The city’s clever solicitation of spruce donations serves many purposes. For one thing, it provides a spectacular highlight to the downtown holiday season, as the decorated and illuminated tree brightens the area around City Hall, and lightens the hearts of children and adults alike.

For another thing, the donation saves some hard-earned taxpayer money that would have been spent to buy a tree. A ten-footer runs you a hundred bucks nowadays.

Thirdly, and most important, the holiday culling reduces the overall number of spruce trees growing in the city, which is a good thing.

I wish it was Christmas every day, just so we could chop down more of these trees. And if anybody wants to come up with a Boxelder-themed holiday with the same rules, I’m game.

Kill a Spruce to Spruce up a Yard

The arboreal species Picea pungens coloradensis is particularly unsuited for an urban environment. One reason is the height, already mentioned. Another is its girth, which is easily half or more the height of a full-grown tree. There are very few lots in the city of Milwaukee large enough to host a spruce tree without it growing into the house, the overhead wires, the sidewalk or the neighbor’s yard. And no other plants flourish beneath its broad canopy, which reaches to the ground. Likewise, the horizontal spreading roots lie close to the soil, interfering with cultivation beneath and beyond.

It is possible (in fact essential) to prune the species, as is done at professional Christmas tree farms, but homeowners and landscape contractors rarely do it well or in a timely fashion. And if pruned too late, the tree rarely regains its former shape, since it does not produce growth on old wood. Very often the trees are planted by homeowners who dug up a sapling while hunting or fishing up north, figuring a tree would look pretty in the yard.

These homeowners rarely have a clue as to how large the tree will become, and how small their lot really is. Even the 2017 tree was planted too close to the walkway of the house, when it could have been planted further out in the yard. Spruce trees grow 8 to 16 inches annually in every direction, and should never be planted closer than 20 feet to anything else, which is virtually impossible on a city lot.

Also, folks with hilly lots tend to plant the spruces on the flat, usable part, which is nuts, since it renders the yard unusable. A tree does not mind if it is standing on a hill, in fact it often benefits from the drainage. The City Forester does not plant the species in the public way, for these reasons and more. Plus the needles hurt. I trust I have stated my case.

About the Christmas Tree House

It is worth noting that the donor of this year’s tree bought his home just last March, and apparently wasted no time deciding to enter his spruce into the competition and thus clear up his yard for real landscaping.

The residence dates to September 11th, 1891, when permit #918 was issued for a $2,000 single family dwelling to be constructed for Louis Schroeder at what was then 695-21st Ave. Fred Radloff was the builder of the 1-1/2 story home that sat on one edge of a rather large corner lot. As was often the case at the time, the home sat on a wooden foundation — quite possibly made of spruce.

Nearly a century ago, on April 1st, 1918, George Paplarski, then the owner, took out a permit to convert the single-family home into a two-family flat at a cost of $900. Part of the contract called for the rotted foundation to be removed and the building to be underpinned with 10-inch concrete blocks, the construction industry’s new wonder material.

Fortunately, there was a concrete block factory located in a guy’s back yard just a block to the south. (This is the South Side, after all.) In April of that year, the house was moved elsewhere on the lot, the old wood basement was excavated and replaced with block, and the home returned to its new foundation. On May 4th, inspector J. G. Hintz came by and gave his okay for the work.

The purchaser was Mathias Maciejewski, who served as a Chainman at the Falk Company. (I originally read that as “chairman” of the Falk Co., which surprised me as this is hardly an executive residence. Chainmen attached and detached loads from overhead cranes.) Upstairs from Maciejewski lived William Browne, whose job was listed as “Helper,” which seems like a friendly position, and a good career for a neighbor to have.

In 1950 the home was owned by Ralph L. Niemczynski, who lived there with his wife Charlotte. Upstairs was Mrs. Mabel Roterud who served as a homemaker with the Milwaukee County Department of Public Welfare. In 1952, Ralph paid the Pioneer Improvement Company, Inc. the sum of $1,845 to change 8 windows and to install the dreadful asphalt siding that still covers the home today. Fortunately some fine detailing work on the top of the building was unmolested.

In February, 1959, Milenko Radivojevic bought the house for $13,000, and held on to it for 15 years. In April, 1968, the assessor took a look around the old place and approved of its originality. “Ext. Well Maintained little apparent modernization. Old Style 8A [Residence] converted to 2 family.” D. Lorenz bought the place in 1974 for $6,166, and installed two gas furnaces in 1985 — a Carrier Model 5855-060 for the upstairs, and a Magic Chef EG6B60DC24 for the first floor. The home was purchased by the current owner on May 31, 2107 for $29,000, or about half the assessed valuation. Due to its being sited some 8 feet above grade on three sides, it would be quite difficult to locate a garage on the site without extensive excavation and retaining wall work. The home had been assessed as high as $93,200 during the real estate craziness of 2006. 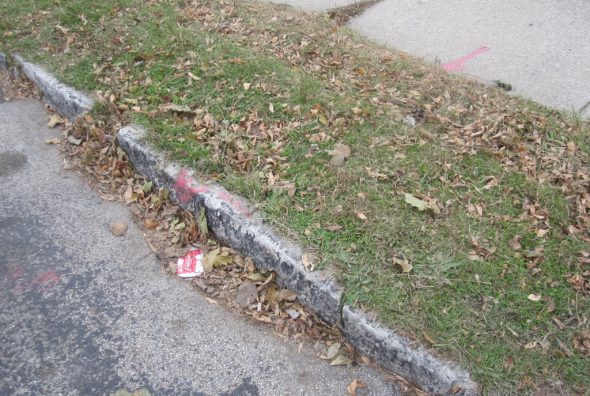 The home sits well off to the side of a corner lot, just feet from the neighbor to the south, and thus affords a large yard to the north. The Christmas Tree was planted just to the northeast of the home, where it obscured views in each direction. According to a neighbor, the tree was planted to screen the glare from the street light. The street has the original Lannon stone curb associated with early Milwaukee streets, and is likely over 110 years old. Across the street are two large multifamily homes constructed of brown and beige tile, an unusual material for residential construction in the city.

The lower half of the home is painted Larkspur Blue as if it was a ’57 Chevy, while the upper asphalt is colored a Forest Green. The roof is gray and recent, and the bays of the home have the corners cut off at 45 degree angles, which was a popular feature of the time, and seen in such notable residences as the 1898 home of Bruce Murphy, the editor of Urban Milwaukee. The landscape is limited, which is no surprise, since the property was dominated for decades by the now demised spruce. An attempt was made at planting on the bluff to the west of the home at one point. A spruce tree can be seen just a block away on S. Layton Blvd., and another is immediately across the street to the north. Either could stake a good claim to join their former neighbor in front of City Hall some day. The city will accept applications beginning in September, 2018. With luck, the Muskego Way neighborhood could be celebrated far and wide as Milwaukee’s City Christmas Tree capital. Ah, but there are so many other contenders. 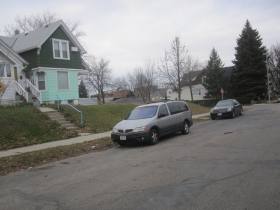 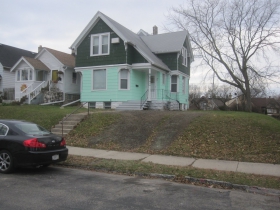 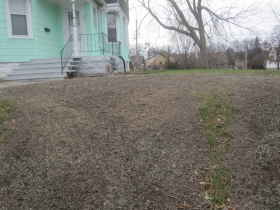 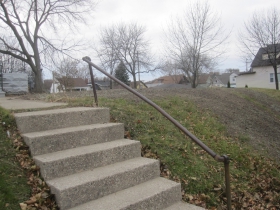 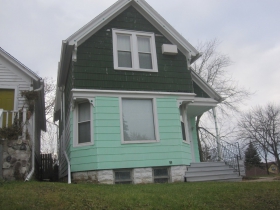 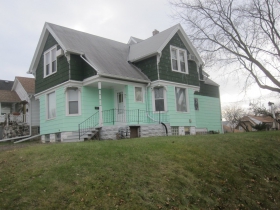 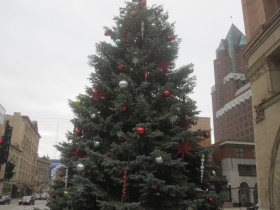 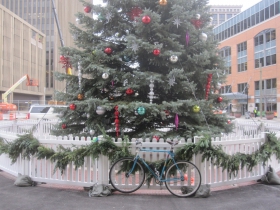 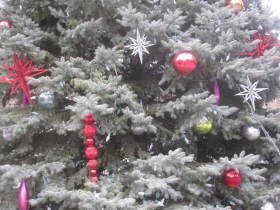 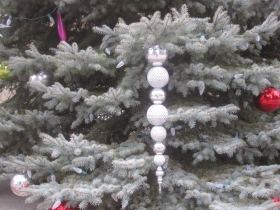 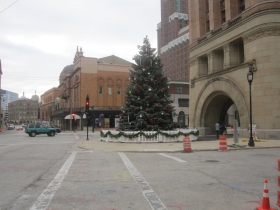 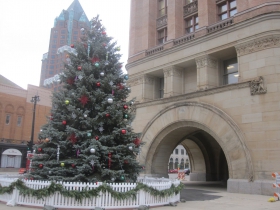 How Milwaukee Is It? The residence is 4.0 miles southwest of City Hall