Did Walker Save Wisconsin’s Economy?

So claims his supporters at WILL. Let’s consider the evidence they offer.

If one types the words “Walker Wisconsin Economy” into a search engine, among the first page results are a link to a post for The Federalist entitled Yes, Scott Walker Did Back Wisconsin’s Economy Away From A Cliff. It’s written by by Jake Curtis and Will Flanders, two staff members at the Wisconsin Institute for Law and Liberty’s (WILL) Center for Competitive Federalism.

The post was in response to my April Data Wonk column, ALEC and Wisconsin’s Economy, which pointed out that Wisconsin’s improved “Outlook” score from the American Legislative Exchange Council (ALEC) since Walker took office was not accompanied by a better Performance score from the same organization.

The authors’ apparent aim is two-fold: defending Walker’s record on the Wisconsin economy and the agenda advocated by ALEC. To do this, Curtis and Flanders adopt Walker’s favorite argument– comparing today’s Wisconsin economy with the economy when Walker entered office.

“When Scott Walker was sworn in as Wisconsin’s 45th governor in January 2011,” they say, “the state’s economic performance during the previous eight years had been dismal, and the outlook was worse.” This argument closing parallels a recent Walker opinion piece in the Milwaukee Journal Sentinel supporting the Trump tax plan: “When I took office in 2011, the people of our state were suffering from record job loss …” Today, Walker adds, “Our state’s economy is growing …”

This “then/now” argument used by Walker and the WILL writers assumes the reader is completely ignorant of what else was happening at the time. In January 2011, when Walker entered office, both the national and Wisconsin economies were just starting their second year of recovery from the Great Recession. Today, after seven more years of recovery, practically every state’s economy is in much better shape than it was seven years ago.

That Wisconsin hasn’t done as well as most of these states is documented in a report from ALEC itself. Every year, it publishes a report, called Rich States Poor States, that rates states on two measures. One is an “Outlook” scale based on how well a state conforms to ALEC’s policy prescriptions. The other is a “Performance” scale, based on how the state has performed over the past ten years on three measures: state gross domestic product, absolute domestic migration of state residents, and non-farm payroll employment.

The policies going into the Outlook score track the current right-wing policy agenda. Generally, ALEC rates a state more highly for policies that make wealthy people wealthier and keeps labor cheap. For example, Wisconsin is rewarded for lacking an estate tax and a minimum wage, and for its right-to-work law weakening unions.

Underlying these policies is a belief that prosperity is caused by wealthy people and depends on low labor costs. This belief underlies the ill-fated tax reductions in Kansas, the current GOP tax proposals, and the Walker agenda. Reflecting Walker’s policies, ALEC rates Wisconsin as 14th best in Outlook.

However, that change has not generated a similar gain in the ALEC Performance score. On Performance, Wisconsin has been stuck around 40th place since before Walker was governor. Curtis and Flanders’ main response to this problem is to blame Walker’s predecessor:

Curtis and Flanders, however, make no attempt to verify this assertion. Would excluding the Doyle years help Wisconsin’s Performance rating? To answer this question requires a look at the three measures used to calculate the Performance rating: gross domestic product (GDP), net migration of state residents, and jobs growth.

The next graph shows real GDP for Wisconsin, Minnesota, and the US starting in 2003, when Doyle took office. Wisconsin’s growth in GDP lagged both that of the nation and of the slightly smaller Minnesota over the entire period—and it did so during both governorships. It appears that starting the comparison at 2011 would have had a negligible effect on Wisconsin’s rating. 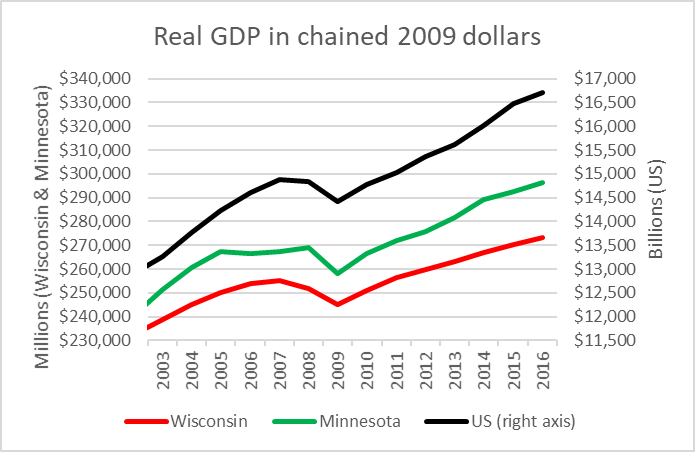 The second measure ALEC uses is net migration. The graph below, taken from ALEC’s report, shows net migration into and out of Wisconsin. The negative numbers indicate that every year more people left Wisconsin than entered. If anything, the net outflow has become larger during the Walker years, so that limiting the data to the Walker years would likely have hurt Wisconsin’s standing. 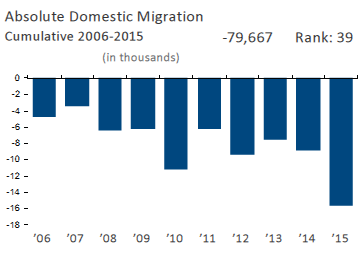 ALEC’s third and final Performance measure is employment growth. Since Walker took office, the state’s percentage of national employment has shrunk at a faster rate than during the Doyle years.

In short, if ALEC started its clock in 2011, when Walker took office, Wisconsin’s Performance ranking would decline, not improve.

Whether or not ALEC’s three Performance measures are the right way to judge a state’s economy, at least they qualify as economic measures. They attempt to reflect whether a state’s residents are prospering. Other than unemployment, none of the other measures Curtis and Flanders bring up—taxes, deficits, segregated funds, reserves—measure the state’s economy. Instead they measure the fiscal health of government. While a healthy government may contribute to a healthy economy, they do not measure the prosperity of the population.

There other factors that could be used to assess the health of the Wisconsin economy. Several are suggested in a PolitFact article from last April. In it the Journal Sentinel’s Tom Kertscher and Andrew Mollica evaluated a claim from Scott Walker that “Wisconsin’s economy is in the best shape it’s been since 2000.”

As a result, Kertscher and Mollica label Walker’s claim as “half true.” They are careful, however, not to take the next leap: to conclude that the changes, good and bad, are due to Walker.

Notably, ALEC misses no opportunity in its reports to attack California and its governor, Jerry Brown, as the epitome of bad economic policy. Yet in the seven years since both Walker and Brown took office, California’s job growth has far outstripped that of most other states, including Wisconsin. 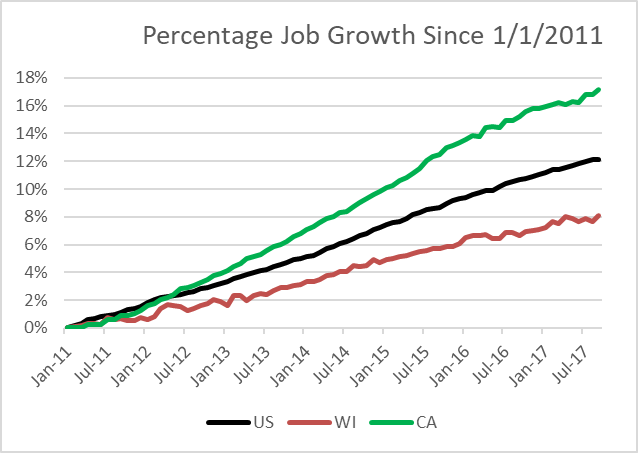 Historically, economic activity was very dependent on geography. Closeness to raw materials and intersections of transportation routes often determined where economies expanded. Today, having an environment that people find attractive is increasingly important. The policies advocated by ALEC do little to enhance the attractiveness of a state.

Curtis and Flanders, as well as Walker himself, start with two desired conclusions: that Governor Walker saved the Wisconsin economy and that the program advocated by ALEC brings prosperity—and work backwards from there, ignoring widely available economic measures. Unfortunately, that is not a recipe for serious policy analysis. It is however a recipe for extremely bad economic policy, such as the current Trump tax plans, that have been widely rejected by the public and by serious economists.

35 thoughts on “Data Wonk: Did Walker Save Wisconsin’s Economy?”