By Andrea Waxman, Milwaukee Neighborhood News Service - Nov 23rd, 2017 10:38 am
Get a daily rundown of the top stories on Urban Milwaukee 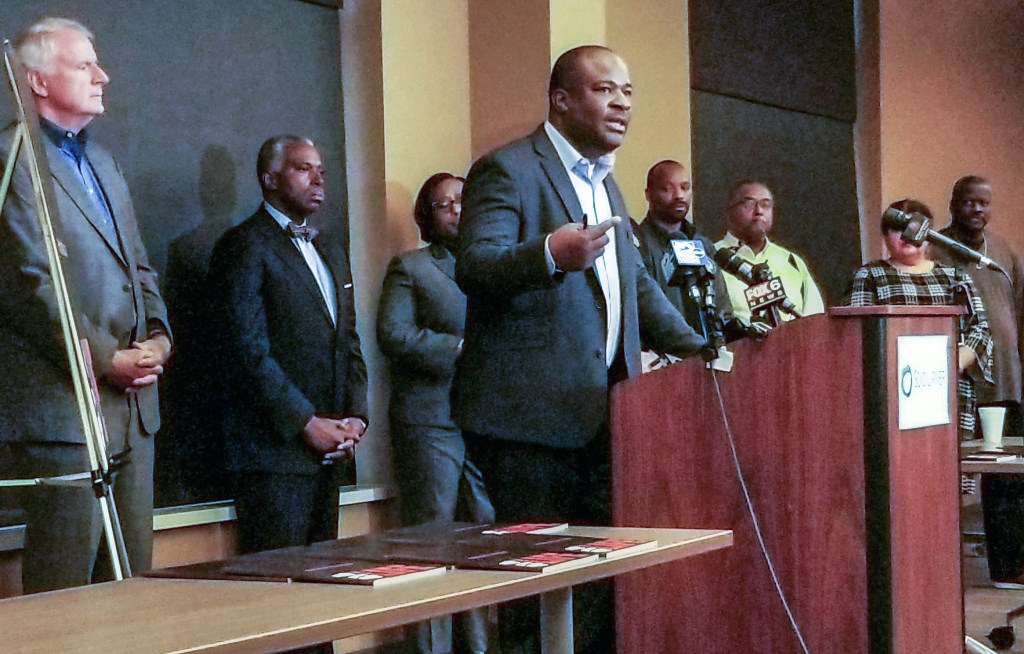 OVP Director Reggie Moore (at podium) introduces the Blueprint for Peace as (from left) Mayor Tom Barrett, Health Commissioner Bevan Baker and members of the steering committee look on. Photo by Fred Croen.

After the official release of the city’s first comprehensive violence prevention plan on Friday, Bader Philanthropies, Inc. took the lead in offering financial support for the plan.

The first goal of the “Blueprint for Peace,” developed by the Milwaukee Health Department Office of Violence Prevention (OVP) is to implement Ceasefire, an effort to immediately interrupt conflicts that can lead to violence. The program will launch in spring 2018 in the Old North Milwaukee neighborhood.

The Bader grant is a significant step toward funding a second neighborhood, according to the health department. The 2018 city budget also allocates $280,000 for the program. Ceasefire is modeled on Cure Violence, a public health approach that implements strategies used to reverse epidemics.

“I can think of no more pressing issue for this great city than for us to lean forward in a true public health approach to violence prevention,” said Health Commissioner Bevan Baker, who noted that race, segregation, poverty, educational attainment and the adverse effect of childhood trauma must all be considered in addressing the complex issue.

MPS Superintendent Darienne Driver said that it gives her hope that now “when we talk about violence prevention, it is being talked about as a health crisis, because that’s truly what it is. How am I going to keep my young people safe …is what keeps me awake at night,” Driver added. 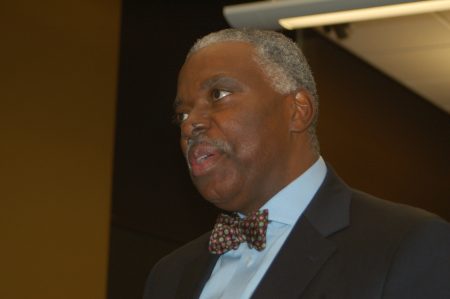 Health Commissioner Bevan Baker says the release of the violence prevention plan is a watershed moment for the city. Photo by Andrea Waxman.

Carmen Pitre, director of the Sojourner Family Peace Center where the blueprint was unveiled, said the plan is not just about ending violence, it’s also about helping people “create wellness in their lives. This is a human rights issue. Everybody deserves to live in peace.” Pitre is a member of the blueprint’s steering committee.

Spelled out in a 96-page book richly illustrated with photos and graphics, the plan is the result of a process launched on Nov. 1, 2016. More than 150 community partners and residents were represented at the initial planning meeting at Discovery World. About 1,500 community partners and residents — including many young people — contributed through surveys, interviews, community conversations and forums over the course of the year, according to OVP Director Reggie Moore, who led the effort.

The plan, originally expected to be released in June, was presented to the Common Council on Monday.

“We wanted to hear from people whose voices aren’t often heard,” said Mayor Tom Barrett, “people who have the stresses in their lives that lead them to situations where there is violence.”

Designed to be carried out over 10 years, the blueprint identifies five other goals, in addition to interrupting conflict that leads to violence, and 30 strategies for working toward them. The additional goals are: promote healing and restorative justice; support children, youth and families; promote economic opportunity; foster safe neighborhoods; and strengthen capacity and coordination of violence prevention efforts.

The plan highlights risk factors — such as limited employment and economic opportunities, and lack of access to resources and quality housing — as well as resilience factors that need to be strengthened to reduce violence. Each factor is linked to one or more of the blueprint’s goals. Resilience factors include initiatives to improve the physical environment, family connections and relationships with other caring adults; and arts, cultural expression and faith.

Next steps include familiarizing residents with the blueprint through a series of community briefings and creating a Violence Prevention Council that includes cross-sector leaders and residents of priority neighborhoods.

Among its responsibilities, the Violence Prevention Council will guide implementation of the blueprint, ensure input from residents and monitor progress. The blueprint includes a list of first-year milestone actions and performance measures.

The planning process was funded by a grant from the Medical College of Wisconsin’s Advancing a Healthier Wisconsin Endowment with partial funding from the Tides Foundation and ReCAST Milwaukee.

“This blueprint is a validation of the work that’s happening,” said Moore, “but it’s also calling for things that we haven’t done as a community.” Most importantly, he added, is “improving our coordination … to really make the impact that we need to have.”

Barrett, Baker and Moore all emphasized the multifaceted nature of the problem and the importance of the entire community taking ownership of the blueprint and contributing in whatever way possible. They also called for financial support from businesses, philanthropic organizations, government entities and private contributions.

The blueprint and information on how to get involved will be available online at 414LIFE.com.