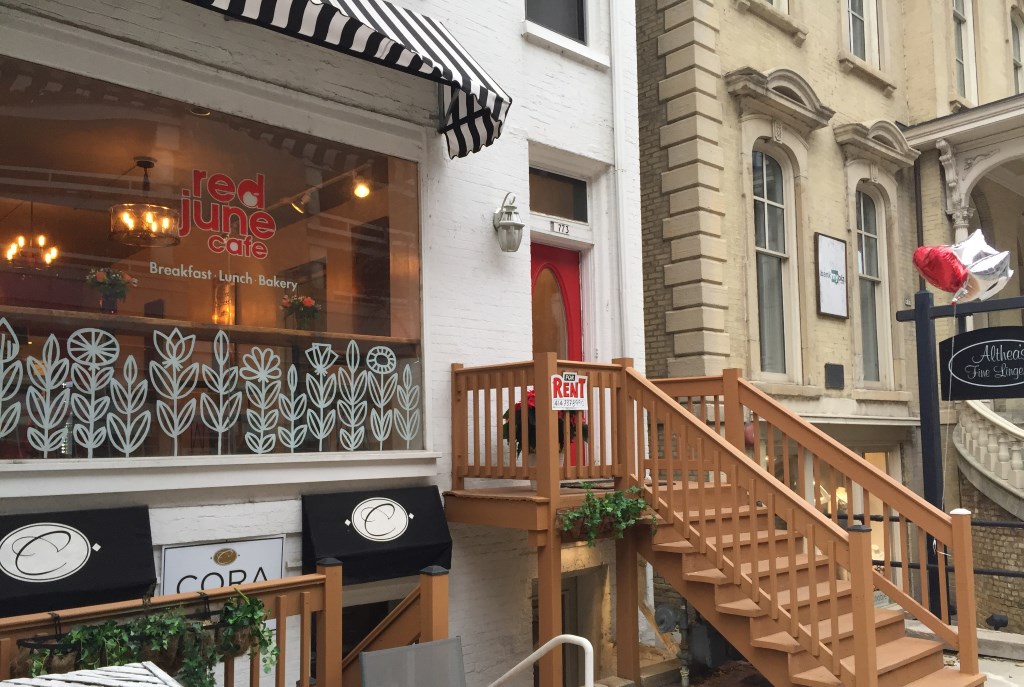 A Chicago cafe with ties to Wisconsin has opened its downtown Milwaukee location. Red June Cafe (773 N. Jefferson St.) has taken over the former space of the East Town Chic Hair Boutique. Fennimore, Wisconsin native Kimberly Blackburn has already opened locations in Chicago and Brown Deer, and jumped at the chance “to bring the concept close to home.” Blackburn will be joined by another proprietor, Hewerton Moreira.

Lori Fredrich of Onmilwaukee.com describes some of the menu items that can be found at the new cafe:

The cafe also offers a full complement of coffee and espresso drinks, along with hot chocolate, Rishi tea and iced beverages including lemonade and Italian soda. The shop’s coffee is sourced from Austrian roaster, Julius Meinl, a company Blackburn became enamoured of during travels to Europe.

The cafe also sells signature t-shirts adorned with a coffee-loving unicorn. Blackburn says the unicorn concept spawned from a bad Yelp review from the Chicago location, which was accused of favoring customers “with honey blood and unicorn smiles.” Red June’s hours are 6:30 a.m. to 6 p.m. Monday through Friday and 7 a.m. to 2 p.m. on Sunday. They will be closed November 23-26 in observance of Thanksgiving, but will reopen on Monday, November 27th. 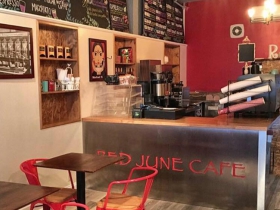 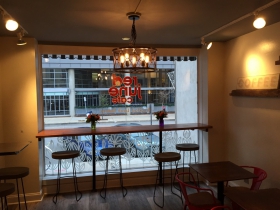 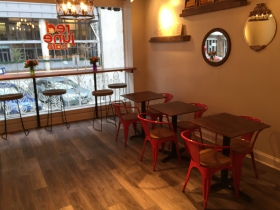 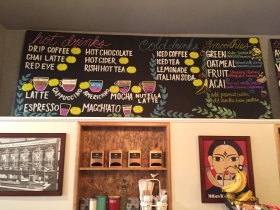 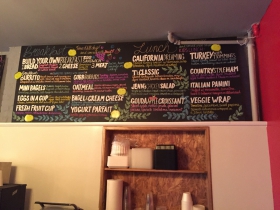 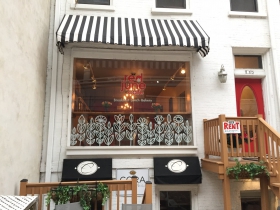 The new restaurant El Patrón Mexican Food & Bar (2423 S. 6th St.) is Cesar Lopez‘s solo attempt at his family’s trade. The 21-year-old started working in the restaurant industry when he was about 10 years old at Cielito Lindo, which is run by his father, Rodrigo Lopez, and uncle, Lorenzo Lopez.

Carol Deptolla of the Journal Sentinel offers a run down of the cuisine:

El Patrón also serves an all-day breakfast, with dishes like eggs and potatoes ($7.99) and the desayuno El Patrón ($11.99), chilaquiles topped with sour cream, cheese and onion and served with steak, beans and two over-easy eggs.

At the 16-seat bar, the drink specialty is the cazuela ($7), a drink of tequila, lime and grapefruit and orange slices that’s served in a small clay casserole dish.

The menu bears a resemblance to Cielito Lindo’s. Both are inspired by specialty entrees from Jalisco, Mexico, where Lopez’s family is from. El Patrón is open from 10 a.m. to 9 p.m. Monday to Thursday, 11 a.m. to 11 p.m. Friday and Saturday, and 8 a.m. to 9 p.m. Sunday.

Last month, there were few details available about the new restaurant opening in the space of the former All Purpose Bar & Kitchen (814 S. 2nd St.). Now, John Revord and Chef Mitch Ciohon of Boone & Crocket, and Chef Shay Linkus, formerly with The Vanguard restaurant, have finally opened up, more or less, disclosing that the place will be named Snack Boys and that it will be a “seriously not serious” bar and restaurant with “highbrow food for lowbrow folks.” Got that?

Fredrich tries to unpack those contradictions:

Creativity will come in the form of a menu filled with 10 to 15 affordably priced eclectic single-serving dishes (snacks) like fried Brussels sprouts, scallops and other nibbles that can be ordered in countless combinations to create the equivalent of an entree. Ciohon notes there may also be a few shareable items, like fondue…

And that sparkly drink may well be a fun slushified take on the Malibu Bay Breeze, one of Linkus’s favorite sippers. There will also be beer, available both in cans and bottles, along with “Fancy Forties,” a tongue-in-cheek take on bottle service…

“The wine menu will be horribly accessible,” says Linkus. “A lot of rose, gamay, ferments … loads of pink wine. And lots of Eastern European orange wines.”

The inspiration for the restaurant came from Revord and Ciohon’s roadtrips to Canada, where snack bars have recently dominated the dining scene in Toronto. The proprietors expect to open Snack Boys in mid to late December.

Shake Shack in the Third Ward

In a press release from May, Shake Shack announced Brew City would be home to a new location of the franchise. Now, we have a more definite opening-date for the fast-casual restaurant to be located at 220 E. Buffalo St.

Pop-Up Christmas Bar at the Outsider

The Third Ward is getting a jump on the holiday spirit a week before the annual tree-lighting at the Christmas in the Ward festival. On November 24, the Outsider will be hosting Miracle, a national Christmas-themed pop-up bar. Miracle’s debut will marked with an opening party Friday night.

Deptolla has the story:

Miracle has Christmas-themed cocktails like How the Gimlet Stole Christmas (gin with pine, sage and caraway cordial) for $14 in a decorated setting. The decor at the Outsider, atop the Kimpton hotel at 310 E. Chicago St., includes trees and life-size toy bears…

The opening night party will have an ugly-sweater contest, cookie-decorating station, photo booth, a DJ and a visit from Santa from 8 to 10 p.m…

Part of food and drink sales from the party will go to Share Our Strength’s No Kid Hungry campaign. Admission is free, but the bar is encouraging people to bring a new toy that will be donated to patients at Children’s Hospital of Wisconsin…

After three years operating at 706 S. 5th St., Brenner Brewing Company will be closing its doors after this weekend. Owner Mike Brenner announced he is “being forced to close” the company’s brewery and tasting room in an ominous post on his personal Facebook page on Monday, with no details on who is doing the forcing or why.

Milwaukee is in the midst of a craft brewery boom. Brenner Brewery Company was one of the first microbrewies to help get the ball rolling. Sadly, Brenner Brewing is now the first in the well-populated guild of Milwaukee breweries to close its doors…

Brenner Brewing Company opened at 706 S. 5th Street in 2014. The brewery was known for its lighthearted tours, beers with names like Butterfly Farts and Bacon Bomb, labels produced by area artists, and an affinity for local art that Brenner (a former gallery owner) instilled in the space.

According to Brenner’s post, the brewery’s hours during its final days will be 4 p.m. to 11 p.m. Wednesday and Friday, 11 a.m. to 11 p.m. Saturday. It will open on Sunday at 11 a.m. and will close after the Packer Potluck.

Two weeks ago, rumors that the bar (1732 E. North Ave.) could be another North Avenue casualty first surfaced. On Monday, owner Jason Growel confirmed that he has sold The Eastsider to Taylor Layton, who plans on opening a “craft cocktail and wine bar with a soccer twist” called Baccanera.

Growel talked with the Shepherd Express, which offered this take:

Eastsider was once heavily frequented by UW-Milwaukee students, and known for their Wednesday night fishbowls and Thursday night $1 bombs. On many nights you could see lines wrapped around the block to get in. Growel thinks that the new concept will better serve the changing neighborhood.

“I believe that bar will do well with all of the development that has gone on there, especially those apartments that have gone up,” Growel said about Baccanera. “Those places aren’t cheap to rent so I don’t believe that college kids are renting those. It’s probably people in their late 20s, early 30s. I think that this kind of establishment is going to work wonders for them.”

The Eastsider first opened in 1999, and Growel purchased the bar 10 years ago. The bar’s last day will be December 16.

3 thoughts on “Now Serving: A Big Week for New Restaurants”