More than 1,000 veterans and supporters march to War Memorial and remember the fallen. 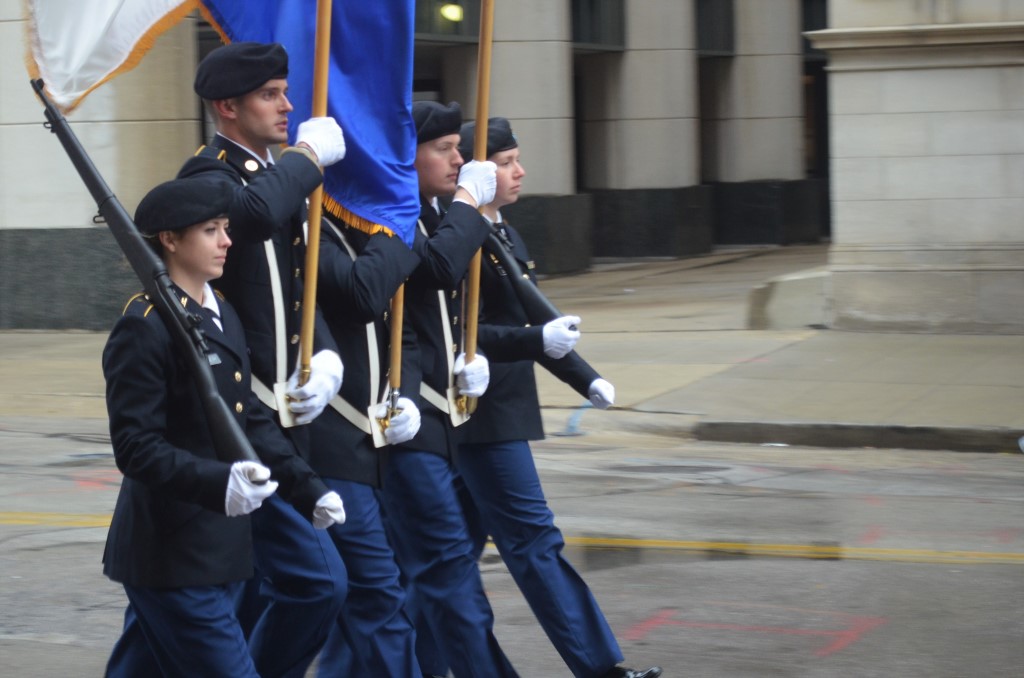 There may have been rain on the Veterans Day Parade, but that didn’t stop more than 1,000 veterans and military from marching down E. Wells St. to the Milwaukee County War Memorial Center.

Veterans and military groups from all over southeastern Wisconsin joined the parade, including the Tripoli Shrine Legion of Honor, The United Royal Lao Armed Forces, and War Dogs. We also got to see towering military vehicles as well as vintage cars and Voiture 750 turning a bus into a train.

After the parade came the memorial service at the War Memorial Reflecting Pool. Mary Ann D’Acquisto, president of the Veterans Division of Honor Our Military, Inc., said that she received tons of emails prior to the event asking if they would still hold it despite the rain. No problem – they persevered despite the weather.

The memorial service was meant to honor those who died serving for our country, but the service also took time to honor combat medics and corpsman as their special guests of honor.

“With[out] all the combat medics doing their jobs so well, we would have a lot more names on the wall by the reflecting pool,” said D’Acquisto during the ceremony. “So we truly appreciate your service.”

The combat medics and corpsman honored at the ceremony included Grand Marshall George Banda, US Army Medical Specialist 4, 2nd Battalion, 501st Infantry, 101st Airborne during the Vietnam War. Master of Ceremony Jim Fridl, vice president of the Special Forces Association Great Lakes Chapter 73, recounted one grisly tale of Banda when he was at Firebase Henderson during an attack. After stanching the flow from a bullet hole on the side of his head with a piece of cloth, Banda was able to find and retrieve his barely alive friend Ed Veser before he died the next morning.

Banda was awarded Combat Medic Badge 1st Award, Silver Star Medal for Gallantry in Action, Bronze Star Medal with “V” Device for Heroism in Ground Combat, Purple Heart Medal for Combat Wounded, and many other commendations. He currently serves as Commander of Milwaukee County Purple Heart Chapter #818 and serves on many other boards and committees throughout the state. He also was a Past State Commander of the American GI-Forum, a national Latino veterans organization, and is a retired Milwaukee County Fireman.

Banda told Urban Milwaukee that he was humbled by the ceremony and felt very fortunate to be there. He said that he’s still getting used to seeing his name on plaques.

“Who would have thought that 47 years later after leaving Vietnam that… I’m a parade marshal of the Milwaukee Veterans’ Parade,” Banda said. “My buddies didn’t make here so I honor them by doing what I can for veterans and my community.”

He said that the speech was hard to hear because it brought back his memories of serving in the war and all his friends who died.

“I try to live for them… so that I don’t waste my life,” Banda said.

Banda visits the Vietnam Veterans Memorial in Washington D.C. every year, but this year he was invited to read the names on the memorial on November 10 including those he served with and took care of. He said that the best way to honor veterans is to come to events like the Veteran’s Day Parade, remember the contributions of veterans, and to be a good citizen.

Our photos capture highlights of the parade. 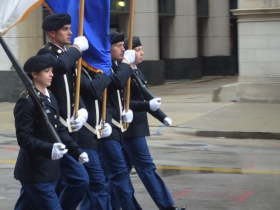 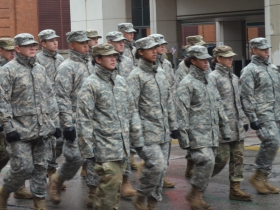 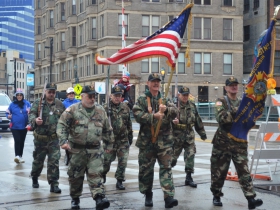 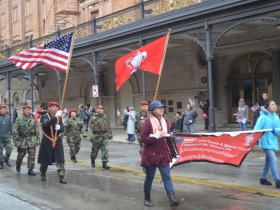 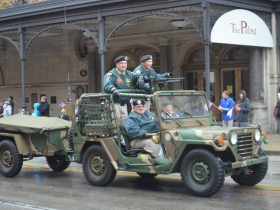 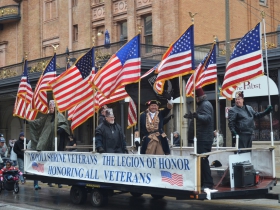