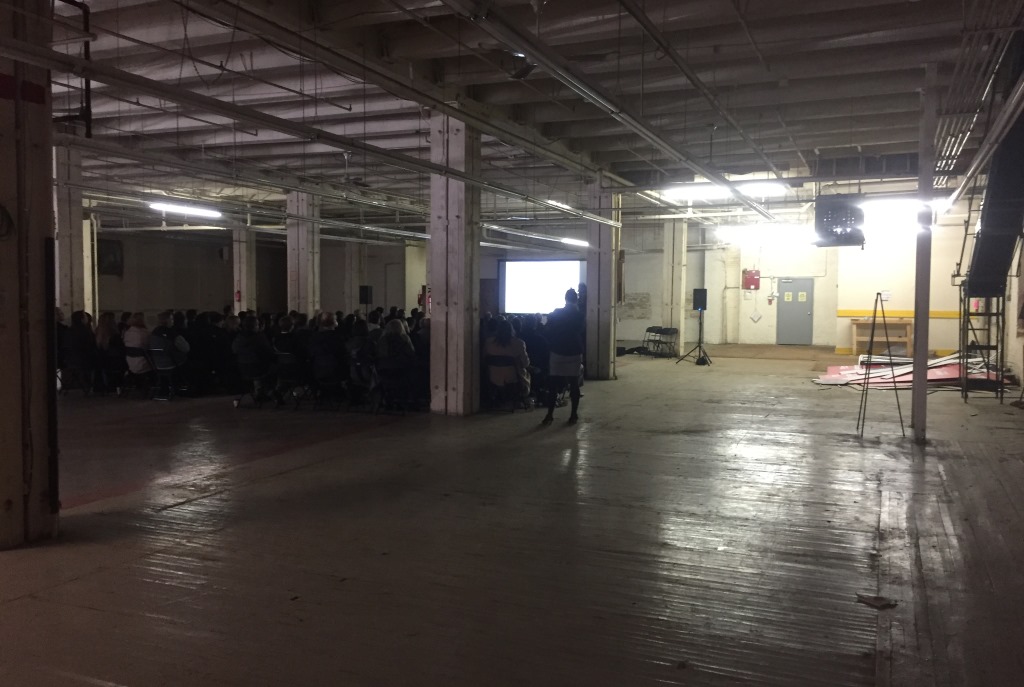 NEWaukee‘s Empty Storefronts conference returned to Milwaukee today for its third installment. The annual conference focuses on identifying solutions to fill vacant storefronts in commercial corridors. The day-long conference brings together stakeholders from across the state to discuss problems and share solutions on filling everything from 500 square-foot storefronts to former big box stores. Those in attendance ranged from developers and brokers to planners, business improvement directors, architects and bankers.

“This is not your typical real estate conference,” said Jim Villa, representing the conference’s presenting sponsor NAIOP Wisconsin. That fact was abundantly clear to the 165 attendees sitting in folding chairs in the middle of the former National Ace Hardware at 1303 N. 4th St. The hardware store closed in 2015 and left behind a complex of nearly 100-year-old buildings. The 18,150 square-foot commercial space was notably lacking in heat and bathrooms on Monday morning.

Things are looking up for the former hardware store though. Developer Sean Phelan announced to the crowd that his group, which includes developer Blair Williams, has signed a letter of intent with a commercial tenant for the first-floor space. Phelan noted that he is negotiating a final lease for the space and hopes to announce the tenant soon. The redevelopment, which includes a new infill building and a substantial amount of office space on the upper floors, is known as the Hardware Headquarters.

Attendees heard about different strategies for reactivating spaces of all sizes. UW-Milwaukee professor Carolyn Esswein told the audience about efforts to redevelop Bronzeville, including the recently-opened Pete’s Fruit Market grocery store. In laying out the years it took to bring a grocery store to one of Milwaukee’s food deserts, Esswein stated “the patience aspect is pretty important.”

Casey Stone from Tulsa, Oklahoma walked attendees through an unconventional project his group developed known as The Boxyard in downtown Tulsa. Stone noted “there was no retail in downtown Tulsa, there is now.” The complex is built out of 39 well-used shipping containers on a 14,000-square-foot empty lot and is the largest such development in the country according to Stone. “I am not ashamed to say I stole the idea” Stone said, as he walked the audience through the development of the project, including many challenges with permitting. The complex is now 100 percent leased and filled with a variety of small tenants.

More than half of the attendees came from outside Milwaukee, with attendees coming from eight states including as far away as Colorado. NEWaukee chief idea officer Jeremy Fojut told Urban Milwaukee that he had three goals for the event this year: connect people of different disciplines, grow the number of attendees from outside Milwaukee and bring in a more diverse set of speakers that could help speak about actually starting new businesses as well as the real estate development.

Breakout sessions were held across the city. Shuttle buses ferried attendees to sessions in a former Lowe’s big box store in Midtown, the Uptown Community and Conference Building at 4828 W. Lisbon Ave., the UWM Mobile Design Box storefront space in Avenues West and the recently redeveloped Laacke & Joys store that is now home to Bader Rutter.

A closing keynote by Jim Neyer entitled “A View From and of Different Markets” was held at the Grand Theatre on W. Wisconsin Ave. The theater, slated for redevelopment by the Milwaukee Symphony Orchestra, has for decades been a black hole in downtown Milwaukee. Afterwards attendees were treated to a beer in the former Applebees at the Shops of Grand Avenue, which has been temporarily converted to a tavern and beer museum by Milwaukee County Historical Society.