MPD recovered several guns and tons of ammunition from one criminal who’s guns were supplied by his brother, who had a CCW permit. Photo courtesy of the Milwaukee Police Department.

Twenty years ago, in 1997, the Journal of Legal Studies published a paper by John Lott and David Mustard. In it, Lott and Mustard reported their findings that violent crime went down after states passed laws allowing their residents to carry concealed weapons. This counter-intuitive finding helped fuel the campaign for similar “Right-to-Carry” (RTC) laws in more states, including Wisconsin.

Lott and Mustard claimed these results came as a surprise, suggesting they were unbiased researchers just looking for empirical evidence. Since then, however, Lott has become a true believer. A glance at his website shows he has become an outspoken advocate for the “more guns, less crime” position. In fact, that is the title of one of his books.

The Lott-Mustard conclusion may have been more influential because of its timing. In 1996, under pressure from Congress and the National Rifle Association, the U.S. Centers for Disease Control and Prevention stopped funding research on firearms. Without the prospect of federal funding many researchers likely decided to pursue other topics.

Even so, a number of concerns were raised doubts about the Lott-Mustard conclusions. One was that the period they studied initially was the height of the crack epidemic. States passing new RTC laws were in the South, whereas northern cities were hard hit by the explosion of crack use. Several researchers looked at trends in later years and found that the passage of RTC laws was actually associated with higher crime.

Another concern was that Lott may have confused cause and effect. Crime rates go up and down over time for no apparent reason. Perhaps a peak in crime triggered passage of an RTC law, which was then given credit for a subsequent decline, one that would have happened anyway.

Despite criticism, Lott’s conclusion was widely influential. First, it was widely used by supporters of bills loosening restrictions on carrying weapons. In addition, it likely encouraged people to buy and carry a gun, particularly residents of dangerous neighborhoods that carrying a gun made them safer. Finally, it backed the argument that any restriction on guns, while well-meaning, is counter-productive.

Isolating the effects of a single public policy is often tricky at best. If there is a difference in crime rates between states adopting an RTC law and those not adopting one, how can it be certain the difference is due to the law and not some other factor? No two states, after all, are exactly the same.

This June, a paper was published on the effect of RTC laws on crime, using the synthetic control approach. For each of the 33 states that passed an RTC law, the authors created a synthetic control state from the states that did not pass an RTC law. The control states were designed to match the actual states as closely as possible in their behavior prior to the RTC law. As the authors (John Donohue, Abhay Aneja, and Kyle Weber) explain, their approach:

uses a matching methodology to create a credible synthetic control based on a weighted average of other states that best matches the pre-passage pattern of crime for each “treated” state, which can then be used to estimate the likely path of crime if RTC-adopting states had not adopted a RTC law.

The synthetic Texas, for example, was created from a weighted average of California, Nebraska, and Wisconsin. The figure below shows the actual Texas crime rate before and after an RTC law as a solid line. The violent crime rate for the synthetic Texas is shown as a dashed line.

For both the actual Texas and its synthetic control, crime rises and then starts falling several years before passage of that state’s RTC law. Following passage of the law, the control falls more. 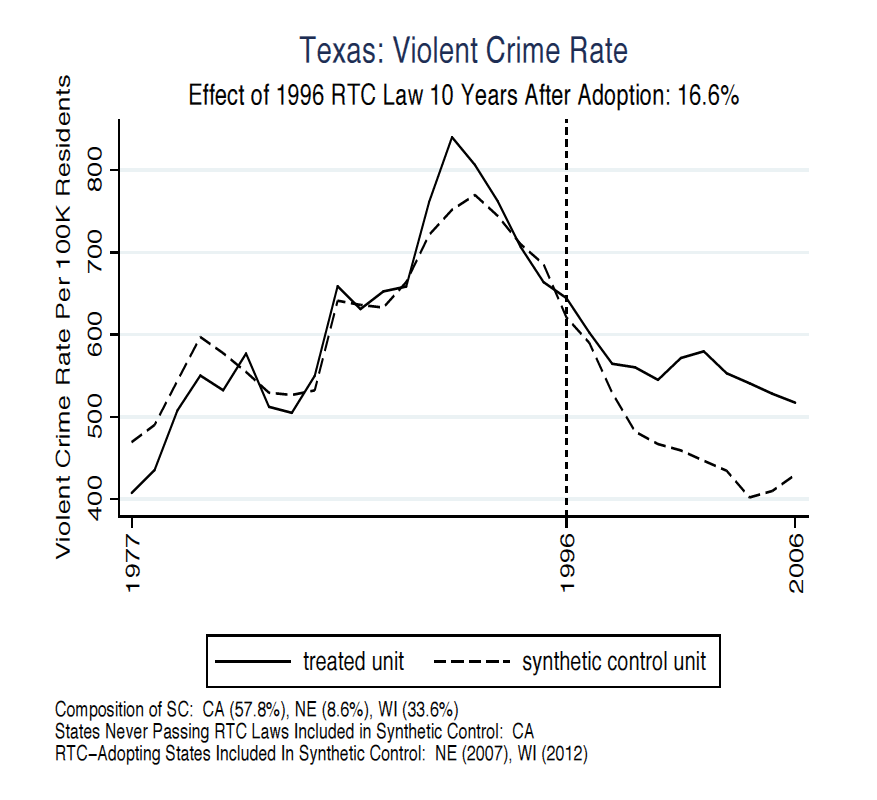 While this model is vastly superior to simply looking at crime rates before and after an RTC law is passed and declaring that any difference is due to the law, it has a number of limitations. One stems from the small sample size; in a few cases it was not possible to combine states not passing RTC laws such that the combination matched an RTC state.

Using this model, Donohue and his colleagues conclude:

the average impact of RTC laws across the 33 states that adopt between 1981 and 2004 indicate that violent crime is substantially higher after ten years than would have been the case had the RTC law not been adopted.

As the next graph shows, the average percentage increase in violent crimes grew every year during the ten-year period following implementation of an RTC law. Wisconsin was not included among the 33 states because its law was implemented in December of 2011, not allowing ten years of post-implementation crime data. 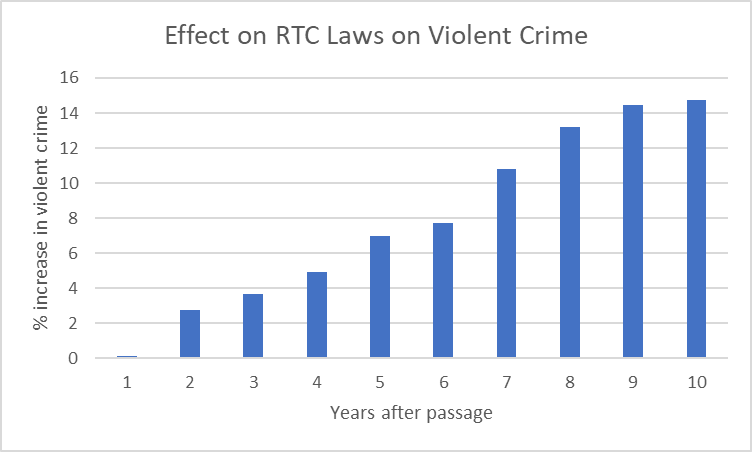 The recent spike in Milwaukee homicides following passage of Wisconsin RTC legislation, shown below, is consistent with the Donohue findings. That said, it does not prove that the law caused the spike. Many other causes are possibilities. (Most of the numbers come from reports issued by the Milwaukee Homicide Commission. Since the commission seems to have ceased issuing reports recently, the final two years come from the database maintained by the Journal Sentinel. The 2017 figure was adjusted on the assumption that in the last three months homicides would continue at the same rate as in the first nine.) 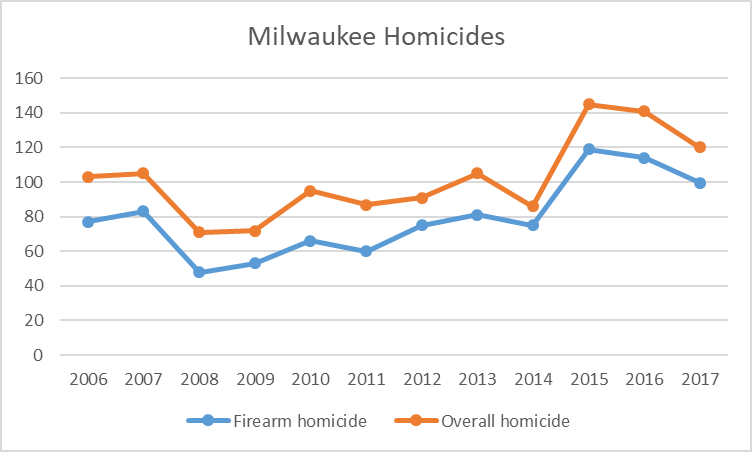 Supporters of the more guns, less crime hypothesis advance several theories as to why more guns would drive down crime. Perhaps the most prevalent is that criminals, fearing that potential victims are armed, decide to go into some other line of work.

Another explanation is that armed citizens are able to stop ongoing crimes. However, there is a great deal of uncertainty as to how often armed citizens do stop crimes. In the case of mass shootings this hope has not panned out. In a study of 111 gun massacres none were stopped by an armed civilian.

There are several possible mechanisms that could explain the more guns, more crime evidence. One is that people with a permit are more likely to commit crimes. Unfortunately, the authors of the Wisconsin RTC legislation did their best to discourage any exploration of this hypothesis. They wrote into the law a prohibition on the release of information on the permit status of a shooter.

A second is that more guns in the hands of law-abiding citizens increase the availability of guns for criminals. Guns legally acquired may be stolen or end up with criminals as the result of private sales.

From newspaper accounts, it appears that many killings in Milwaukee result when one or both parties to a dispute have easy access to a firearm. Having a gun may make a person feel invulnerable and less likely to back down.

A glance at the geography of Milwaukee homicides shows that homicides are heavily concentrated in certain areas, probably areas with the highest concentration of guns. Consider Police District 1, covering downtown Milwaukee and the East Side. Although I am not aware of any survey, my impression is that few of its residents carry guns. Which should supposedly mean gun crime would be rampant. Yet of the over 300 Milwaukee homicides in the past three years, only one occurred in District 1—and that among a crowd returning from watching the July 3rd fireworks.

The pattern of violent crime in states that enacted right to carry laws shows a clear pattern. When taken as a whole, such laws increase the rate of violent crime. As Milwaukee shows, they are particularly destructive to neighborhoods that are already under stress.