Who Benefits from Trump Tax Cuts?

By Tamarine Cornelius, Wisconsin Budget Project - Oct 10th, 2017 10:44 am
Get a daily rundown of the top stories on Urban Milwaukee

The tax plan being advanced by President Trump and Republican members of Congress would mostly benefit the extremely rich, despite initial claims by proponents that it would be targeted at members of the middle class.

Provisions included in the tax framework include:

Here are six charts that show how the Trump-GOP tax framework would affect Wisconsin taxpayers: 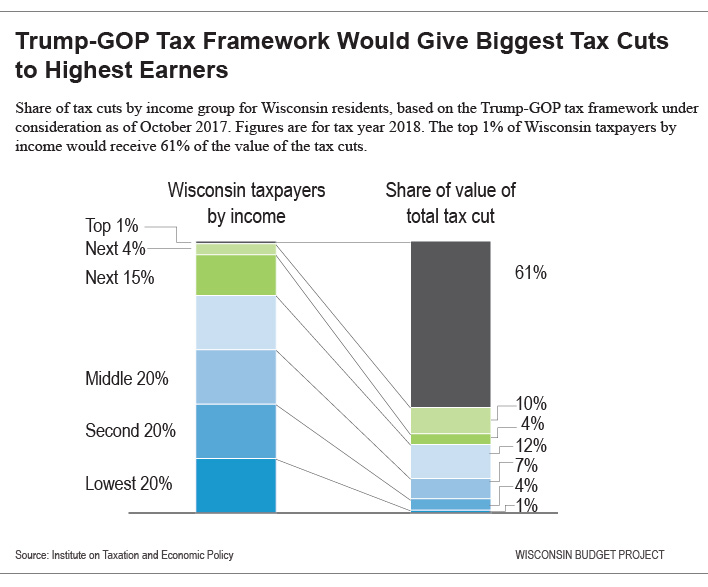 2. Wisconsin millionaires would get a bonanza.
Millionaires make up just one-half of one percent of Wisconsin taxpayers. Yet they would receive more than half – 54% – of the value of the tax cut. 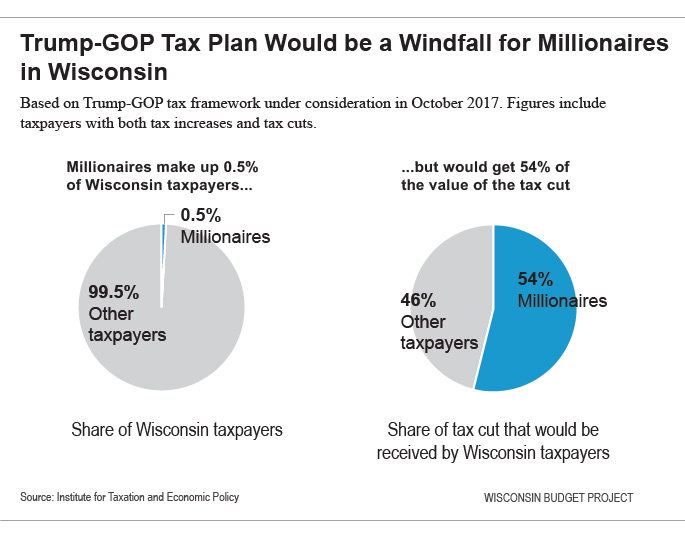 (By the way, that $76,000 average tax cut for taxpayers in the top 1% is enough to cover the average yearly healthcare costs for 44 kids in Wisconsin.) 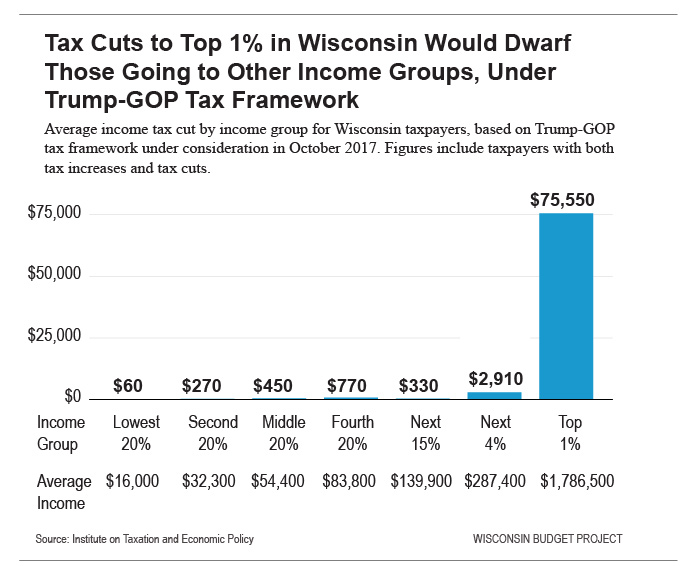 Tax Cuts to Top 1% in Wisconsin Would Dwarf Those Going to Other Income Groups, Under Trump-GOP Tax Framework

4. Even taking into account relative income size, the top 1% would get the biggest tax cut. 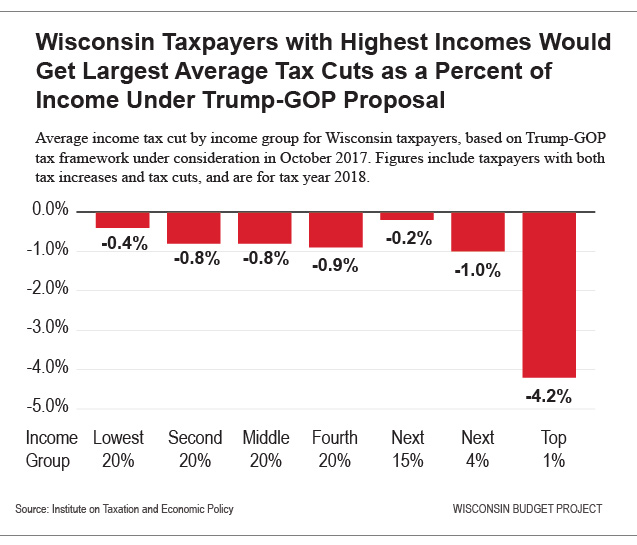 5. and 6. The Trump-GOP tax framework could result in an income tax hike for a sizeable share of Wisconsin taxpayers. One out of every eight taxpayers in Wisconsin would actually pay more in taxes under this plan. The Institute for Taxation and Economic Policy describes why some taxpayers would pay more under this framework:

Taken on its own, repeal of the state and local tax deduction would primarily impact higher-income earners. In the context of the overall framework, however, its ultimate impact falls more heavily on families in the middle- and upper-middle portions of the income distribution. This is because while the taxpayers at the very top of the income distribution would initially be impacted by repeal, the tax cuts they receive in return for giving up their deduction are more than enough to offset that impact. The framework is far less generous in offering offsetting tax cuts to middle-income families.” 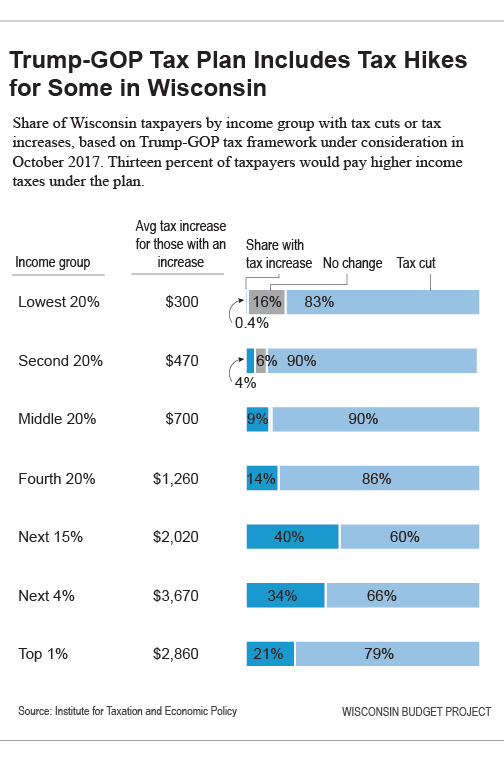 Trump-GOP Tax Plan Includes Tax Hikes for Some in Wisconsin

The share of taxpayers who will lose out under the tax plan is much higher if one considers how the plan will be paid for. As the Center on Budget and Policy Priorities points out: “Sooner or later, the cost [of the plan] will need to be offset through some combination of spending cuts and tax increases.” For most Americans, the spending cuts and tax increases needed to offset the cost of the Trump-GOP tax cuts would cause their incomes to fall more than they would gain from the tax cuts. In fact, every income group in the bottom 95% of the spectrum by income would be net losers on average, while the top 5% by income would be net winners.

For more information: Vast Majority of Americans Would Likely Lose From Senate GOP’s $1.5 Trillion in Tax Cuts, Once They’re Paid For, Center on Budget and Policy Priorities, October 4, 2017.

What’s next for the Trump-GOP tax plan? First, the Senate will have to pass a 2018 budget framework with “reconciliation instructions” for tax reform, which could happen as early as next week. The House of Representatives has already passed its budget framework, which looks different from what the Senate has put together. The two houses will have to reach an agreement on the framework. For more on the intricacies of how the tax plan will move forward, read Before they can cut taxes, Republicans need to pass a budget, Vox, October 3, 2017.

One thought on “Wisconsin Budget: Who Benefits from Trump Tax Cuts?”