Tickets up in August, September, after declining for years.

By Gretchen Schuldt, Wisconsin Justice Initiative - Oct 9th, 2017 11:27 am
Get a daily rundown of the top stories on Urban Milwaukee

Municipal Court traffic cases were down 13 percent during the first nine months of the year compared to the same time period last year, court records show.

Overall, there were 31,515 traffic cases in Milwaukee Municipal Court through September, down 4,912 from the number in the same time period last year, an average drop of 546 cases per month.

The court does not originate the cases – the statistics reflect the activity of the Milwaukee Police Department. 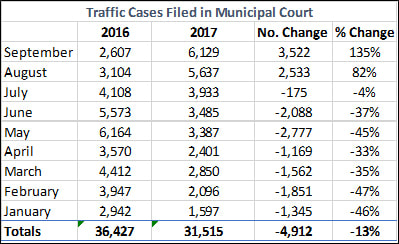 The number of traffic cases jumped sharply in August and September as public pressure about the issue got through to police.

Sherman Park residents gathered signatures on petitions seeking a written plan from the Police Department on how it will step up traffic enforcement in the city. The petitions also ask that police be required to report to the committee monthly on how many traffic tickets they issue. The circulators collected 76 pages of signatures without too much effort, O’Connell said.

The number of tickets issued by police has gone down dramatically over several years, he said. 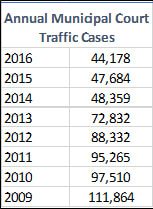 “I am telling you, and you know damned well…that traffic safety in this city is for crap,” Donovan told Harpole.

“Every single time I drive, I’m actually afraid,” Ald Mark Borkowski said. He expressed some frustration with a police PowerPoint presentation on crime and traffic enforcement. “All I’m hearing is statistics,” he said. “We all get these damned calls, and it’s not right. These roads are out of control and it’s not OK.”

Harpole said traffic enforcement was a priority for the police.

“Our officers are putting forth a concerted effort every single day to make this city a safer place,” he said.