Her name goes on all U.S. dollars, but Trump administration unsure of spelling. 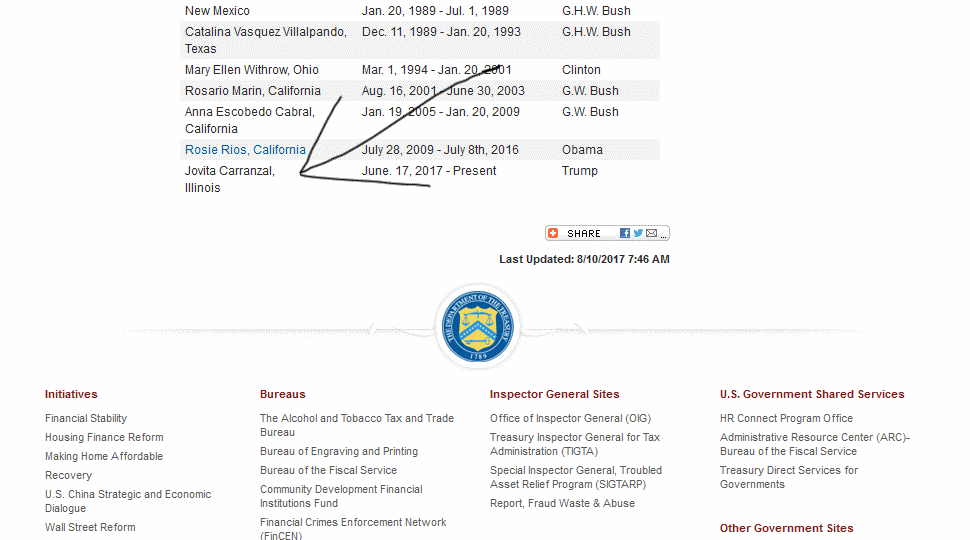 Jovita Carranzal? Screenshot of the U. S. Treasury website.

The Trump administration is notorious for its misspellings, as publications like Huffington Post and Business Insider have reported, but some things must be spelled correctly for official purposes, like the signatures on the nation’s currency.

There are two such signatures. We have all heard of Steve Mnuchin, the Secretary of the Treasury, whose unusual name will go on the 7.4 billion bills of all denominations (except $2) expected to be issued over the next year beginning in December. 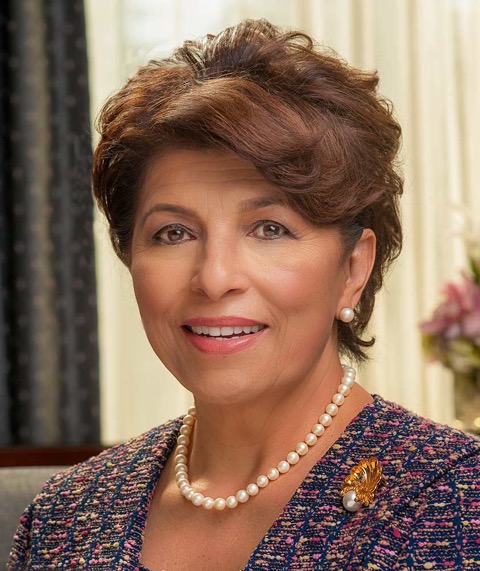 But joining him with her signature on all bills is the far-less-known U.S. Treasurer, Jovita Carranza. Indeed, she apparently isn’t so well known by the administration of President Donald Trump, though he appointed her to the position on June 17, 2017, because the official U. S. Treasury website misspells her name as Jovita Carranzal.

Given the importance of her name to the nation’s monetary system, that’s a rather monumental error. I’m quite certain heads would have rolled if Treasury Secretary Mnuchin had had his name misspelled as “Munchkin,” which comes to mind for some reason.

Here in Milwaukee, we know how to spell Carranza’s name correctly. She serves, after all, as a trustee of Alverno College, which awarded her the distinction of “Honorary Alumna” in 2011.

The woman whose autograph will be seen around the world said this about Alverno in the college’s 2017 Sisterhood Giving Challenge:

The Alverno promise of discovery and commitment to excellence are the signature characteristics that I systematically developed in all life endeavors.

Carranza, 68, was born to a first-generation Mexican family in Chicago, and at the time of her appointment, was head of the JCR Group, a consulting firm. In the 1970’s she worked her way up from the UPS mailroom to a position of Vice President, the highest Latina in the company. She served in the first Bush administration as the Deputy Administrator of the Small Business Administration.

Her interest in Alverno seems sincere. She began her undergraduate studies at the Catholic woman’s college in Milwaukee, but transferred to the University of Miami in Florida. She currently chairs Alverno’s School of Business Advisory Council, where a graduate study room bears her name, spelled correctly, unlike on her official website.

What does the U. S. Treasurer do?

“The Treasurer of the United States has direct oversight over the U.S. Mint, the Bureau of Engraving and Printing and Fort Knox and is a key liaison with the Federal Reserve.” It is a minor office that since 2012 does not require Senate confirmation.

For President Trump, who has a sorry record when it comes to appointing women and minorities, the post of U.S. Treasurer was an easy one to throw in a little diversity. Of the 44 people who have held the job in American history, 15 were women, including everyone who has held the job since 1949. So Carranza is the 16th woman appointee.  She is also the seventh Latina to hold the position since 1971, so the Treasury Department is surely used to spelling the names of Hispanics correctly. Or at least was able to do so until now.

Show Me the Money

For those of us with a passion for U.S. currency and handwriting analysis, the release of the upcoming Series 2017 Federal Reserve notes is a big deal.

So when will the new bills show up at a bank near you?

I asked Lydia J. Washington, the Lead Public Affairs Specialist of the Bureau of Engraving and Printing Office of External Relations.

It is anticipated that the Series 2017 $1 notes will go into production before the end of the year. However, the Federal Reserve, as the issuing authority, determines when they will enter circulation.

3 thoughts on “Plenty of Horne: US Treasurer’s Name Misspelled on Official Site”